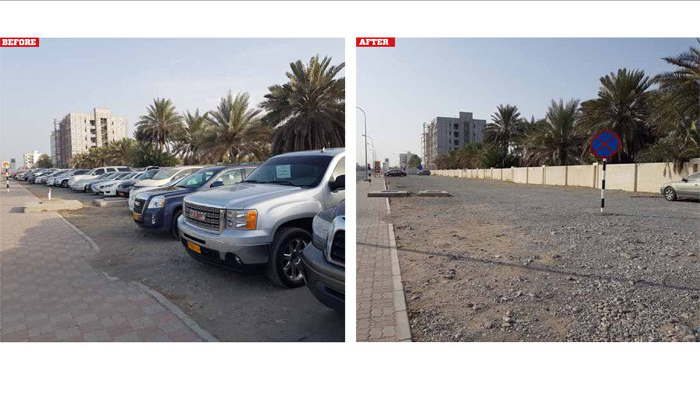 Muscat: Used cars for sale on the streets of Muscat are disappearing fast after new police fines came into effect.
Facing the prospect of a hefty fine under new police traffic laws, people who were trying to sell their cars on public streets have removed them to avoid an OMR 200 fine, along with towing and release costs, under the new laws.
Muscat Municipality, in coordination with ROP, is warning drivers to remove their vehicles, which they have put on display for sale, from public areas or they will be removed by the authorities with the cost being paid by owners.
Vehicles displayed on the public street are in the jurisdiction of the ROP, who have to uphold the law and fine owners, according to the amended traffic law.
“We take care of the vehicles that are displayed on public locations, whereas the municipality takes care of those displayed in other areas. We will act according to the new traffic law,” said a senior ROP official.
The new amended traffic law, article 33, states that “it is prohibited to display vehicles for sale in public locations or anywhere that it could affect the flow of traffic and its safety. The ROP has every right to remove the vehicle without bearing any responsibility.”
The penalty for such a violation is OMR200, according to article 52 of the new traffic law. The owner of the vehicle will also bear the cost of its release, which is between OMR25 and OMR 50.
One street that had over 30 vehicles parked for sale for the past three months has been emptied within a week, and the area looks decluttered, according to local residents.
“I feel relieved. I drive by those cars every day from home on my way to work and back, and I felt like I was suffocating every time I passed them,” said Um Tariq, a resident of the area.
Another Omani national, Talal, who resides in the same area, said, “They have been there for a long time and I was actually happy when I saw a couple of police officers walking between the cars. I knew that they were finally going to empty the lot.”
One resident said that it was more of a safety issue, than the display of the vehicles.
“Some drivers can’t resist taking a look at cars as they are passing by. That moment they take their eyes off the road could result in an accident with the car in front of them. Some of them also slow down almost to a complete stop just to look at the cars,” said an Omani resident who requested to remain anonymous.
There are those vehicles that are left in areas other than public streets, which are sometimes covered in dirt, and the municipality removes them.
“We give the owner two weeks to remove a vehicle by placing a sticker on the vehicle, stating just that. After the time is up, we will tow the vehicle and notify the ROP about it,” said an official from the municipality.
He also explained that the vehicle could have pending cases on it, such as it being a stolen vehicle or the owner had not completed the payment for the vehicle.
“After the police are done investigating it, we auction it off to the highest bidder,” said the official. However, the official added, the owner can release the vehicle before it goes to auction by paying an OMR50 fine to the municipality.