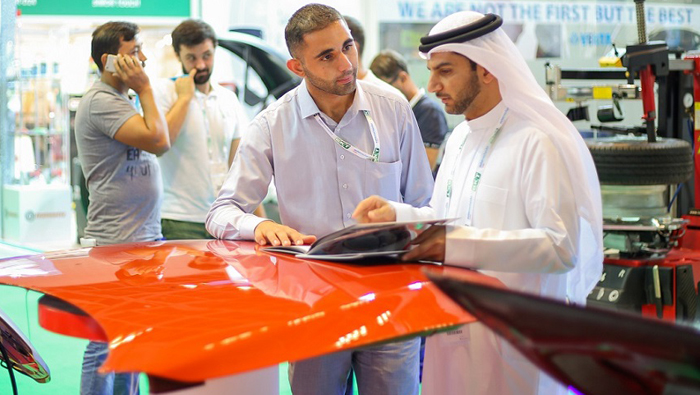 Muscat: Saudi Arabia’s thriving auto aftermarket trade, valued at nearly $2.6 billion in 2015, has attracted the attention of global manufacturers, as they lay down plans to grow their business interests at the Kingdom’s dedicated aftermarket industry trade show.
Figures released by Saudi’s General Authority for Statistics provide a graphic sketch of the importance of the Kingdom’s vast auto aftermarket. In 2015, Saudi imported $2.53 billion worth of auto parts and accessories, passenger and commercial vehicle tyres, and batteries, while re-exports in the same year was worth $51 million.
Parts and accessories was the largest import product group, valued at $996.5 million, followed by passenger car tyres ($715.5 million), tyres for trucks and lorries ($615.3 million), and automotive batteries ($209.7 million).
Asian producers Japan and South Korea featured predominantly as major source countries, with 64 per cent of batteries coming from South Korea. Japan was the largest source country for passenger tyres (30 per cent of imports) while it also led the way in parts and accessories (24 per cent of imports), followed by South Korea (15 per cent) the USA (15 per cent), Germany (10 per cent), and France (7 per cent).
Saudi Arabia’s position as one of the world’s most lucrative countries for the automotive after market means it’s firmly on the radar of leading international and regional players, who are making a beeline for Automechanika Jeddah 2017, which runs from January 31 to February 2, 2017 at the Jeddah Centre for Forums and Events.
The second edition of the annual three-day event, jointly organised by Messe Frankfurt Middle East and Al Harithy Company for Exhibitions (ACE), is the only dedicated trade fair that targets the entirety of the enormous Saudi aftermarket.
The inaugural edition in January 2016 was a breakout success, as more than 5,000 trade visitors networked and did business with 184 exhibitors from 25 countries.
An even larger number of exhibitors are expected to fill the venue in 2017, as they showcase their latest products and solutions across five core product sections of Parts and Systems; Accessories and Customising; Repair and Maintenance; Tyres and Batteries; and Car Wash, Care & Reconditioning.
“The successful launch of Automechanika Jeddah earlier this year has been underlined by the tremendous response from leading aftermarket players, who are keen to participate in the second edition,” said Ahmed Pauwels, chief executive officer of Messe Frankfurt Middle East.
“The figures of the Kingdom’s auto aftermarket trade in 2015 underscores the opportunities, and with Automechanika Jeddah, we’re providing a dedicated networking and business development platform for the aftermarket industry to interact directly with Saudi customers and cater to the specific requirements of this significant market.”
Among the international players already signing on include Barcino Tyre Company from Spain, Deutsche Olwerke Lubmin from Germany; American company US Global Petroleum; Italian manufacturer Le Ma; and Dongnam Corporation from Korea.
They will be eager to replicate the success of Pakistani Company Modern Diesel at Automechanika Jeddah 2016, where it signed a deal with Saudi company Isar Trading International for the supply of autoparts worth US$3 million over three years.
Specialising in automotive spare parts for passenger cars and trucks is Samir Odeh, which will showcase Automechanika Jeddah 2017 will deliver an unmatched platform for the world’s leading auto aftermarket suppliers and manufacturers to establish long-lasting business relationships with buyers and distributers from throughout Saudi Arabia.