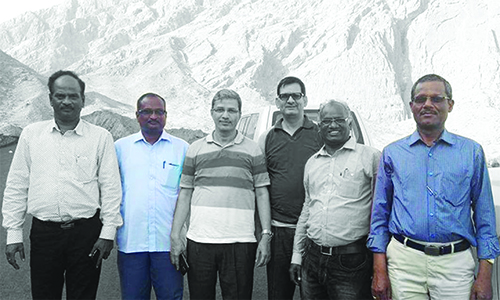 Muscat: An Omani and two Indian nationals died in a road accident in Seeq, between Al Kamil and Bidiya, on Tuesday evening.
According to sources in Jalan, the Indian nationals have been identified as Shanmugam Paramsivam, 49, and KSV Chalapathi Rao, 48.
The accident took place at around 4pm on Tuesday while the victims were on a pleasure trip.
“A Bangladeshi national, who was driving the car, is battling for his life,” the victims’ friends said.
On Monday evening at 5pm, Paramasivan had posted a picture on his Facebook page with Rao and other friends saying they were on a holiday trip to the Mahala job site.
“Both of them were good friends. We can’t believe that this has happened to them,” the friends added.
Rao is from Andhra Pradesh and Paramasivan is from Tamil Nadu. The details of Omani victim were available. A pickup van from a construction company and a four-wheel drive were reportedly involved in the accident.
According to recent figures released by the National Centre for Statistics and Information (NCSI), Oman witnessed an average of two deaths every day in road accidents in July.
More than 330 traffic accidents were recorded during the month, which resulted in 65 deaths and 234 injuries. Thirty-five Omanis and 30 expatriates were killed in fatal accidents.
About 55 per cent of the accidents took place during day time, according to NCSI. Oman’s capital, Muscat, recorded the highest percentage of traffic accidents at 26.7 per cent of the total accidents across the Sultanate, followed by the South Al Batinah governorate with 16.2 per cent. Nevertheless, the country saw a 38.6 per cent decrease in the number of road accidents until July, compared with the same period a year ago.
During the first week of September, Oman implemented new traffic rules with heftier fines for violators.