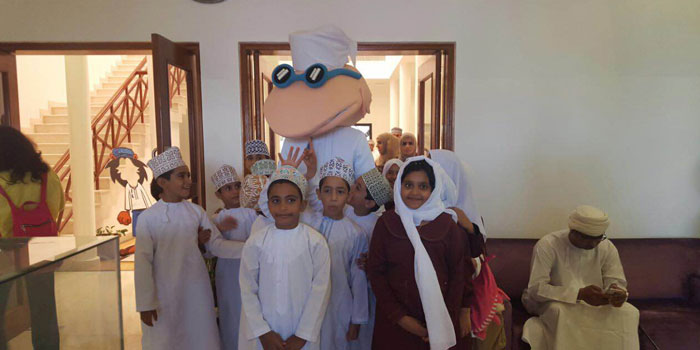 Muscat: A lion, a fish and a bat mesmerized delighted Omani schoolchildren as Al Hoota Cave reopened its doors to the public.
The three characters - each representing an educational component of one of the Sultanate’s tourism jewels - gave the tiny VIPs a fun-filled guided tour as the new cave centre re-opened its doors.

Check out our coverage of the re-opening of Oman’s most popular natural tourist destination.

School children were the first ones to experience the re-opened Al Hoota Cave, as the renovated facility, more than 200 kilometres from Muscat, opened its doors to the public on Monday. The students were given a cheerful welcome by the three official mascots of the Al Hoota cave — Laith, the Lion, Bu Naseh, the blind fish found in the cave and Laila, the bat.
The schoolchildren visiting on the launch day were given a tour of the rich ecosystem, and were shown the four fascinating lakes to see if they could spot the intriguing animals that live in the cave, such as the “Garra Barreimiae” blind fish and the “Rhinopoma Mascatellum” cave bats.
Following the broad enhancements in the visitor experience at the tourist attraction, officials from the Oman Tourism Development Company (Omran) officials and Dr. Sheikh Khalifa bin Hamad Al Saadi, governor of Al Dakhiliyah lead the opening ceremony and were joined by a crowd of officials, guests and excited school children.
Guests were welcomed by traditional Omani music at the reception and were given a tour of the new visitor centre as they discovered the history of the cave at the enhanced interactive geological museum, which showcases over 150 items of rock, wood, corals and other unique materials from the surroundings.
They also had the opportunity to get an exclusive first look at the cave and ride the electric train—the only one of its kind in Oman.
Governor Al Saadi said, “I’m very pleased to officially reopen the Al Hoota Cave for visitors once again, who can come and enjoy this natural wonder. Omran and the Ministry of Tourism have done a fantastic job to make this attraction an even better place for people to come and visit.”
Khalid Mirza, director of Projects Development at Omran, said “We thank Dr. Sheikh Khalifa bin Hamad Al Saadi, Governor of Al Dakhiliyah for officially opening the attraction today. Omran worked exceptionally hard with the Ministry of Tourism to enhance the Al Hoota Cave experience and to be able to welcome the first visitors back is fantastic.”
“But the most striking difference visitors will discover when they come is the renovated visitor centre. It’s now fitting for such a first-class attraction, and offers guests a complete family day out experience. We’re looking forward to giving an opportunity to both residents and tourists to come and discover one of Oman’s jewels again,” he added.
“It was shut because it was flooded, unfortunately, the electrical systems installed for lighting were not water proofed, so even after the water level subsided, nothing worked, so we started refurbishing it about three months ago and one of the first things we did was to waterproof the entire cave.” said James Wilson, chief executive officer of Omran.
“We have our marketing team, full of young Omanis and we have launched the new brand. They took a bit of risk with the mascots, initially during the first hour we were worried and then we slowly saw people starting to understand what they were.”
Along with the opening, a new website that features an online booking facility for tickets was also launched.
The enhanced Al Hoota experience will enable people to get the most from their visits and the ability to plan a visit online means people can book the elements of the visit they want, creating a bespoke experience.
The cave will be open Saturday to Thursday (except Monday) from 9am to 6pm and on Fridays from 9am to 12pm and 2pm to 5pm. In an attempt to support small businesses in Oman, Al Hoota Cave’s fully refurbished restaurant and gift shop are managed by SMEs. The ticket prices of the cave are OMR3.5 for Omani adults, OMR1 for Omani kids between six to 12 years, OMR6.5 for expat adults and OMR3 for expatriate children between six to 12 years.
For more information, visit Al Hoota Cave’s new website: alhootacave.com.