More Omani females than males in college this year 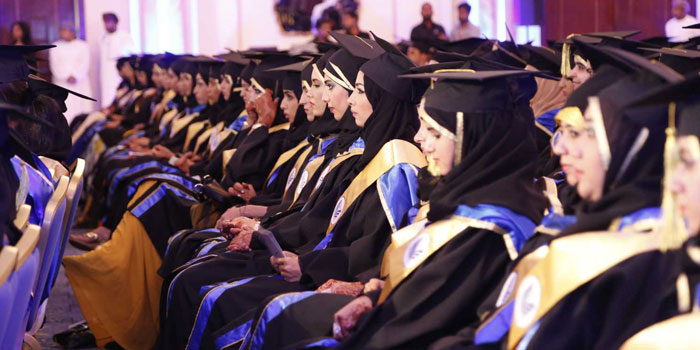 Muscat: More female students in Oman have enrolled in higher education institutes in the new academic year, when compared to male students.
Munawar Hameed, Head of Marketing and Public Relations at the Oman College of Management and Technology (OCMT) in Barka, said that registrations have gone up, and the ratio of women is now higher than males.
“It has been a general trend in our college, where we receive more females than males, and I think this might be because females usually enrol in higher education immediately after high school, rather than boys, who sometimes want to work and better their financial conditions before heading to college.”
He added that registrations have also gone up this year. “Our registrations have gone up this year, and we have prepared all teaching and course work materials beforehand, our website is ready, we have also worked on the maintenance of our library and are fully ready for the new students,” said Hameed.
Also, Manuela Gutberlet, Public Relations Manager at the German University of Technology (GUtech) in Oman, said, “In the last semester (summer 2016) we had more than 1,262 students in five Bachelor of Science and three Bachelor of Engineering programmes, as well as in the foundation year programme, and 75 per cent were females.”
Meanwhile, Ritesh Rajendran, acting Head of Media and Communications at the Middle East College (MEC),said that the recruitment of students has remained steady this year.
“It has been steady. However, we don’t expect it to cross the recruitment number from last year. The number of female students in MEC is a little over 50 per cent of the total student population.”
The same was echoed by Vikash Sharma, lecturer at Waljat College of Applied Sciences. “Our girls to boys ratio is 75 to 25,” she noted. However, an official from Sultan Qaboos University (SQU) said that the ratio is 50 per cent for enrolling boys and girls.
A total of 4,055 students have been accepted for the first semester across the seven different technical colleges in the country, while 3,987 have been accepted for the second semester, with engineering enrolling the highest number of students, followed by business and then information technology. Future students in Oman will have more choices, in terms of their educational fields, as most colleges have planned to add courses to their offerings.
Waljat College is to introduce a four year Bachelors in Chemical Engineering program, and has scheduled weekend programs for their Executive MBA.
Similarly, OCMT has ACCA and foundation in security (CSX) courses in the planning stages, and will move to a new campus in Halban by next year.
Rajendran said that MEC has also added new courses to its list for this year, “This year, MEC has introduced a new course in Building Services Engineering. Ithas been created, keeping in mind the increase in the number of construction projects in Oman and that the future belongs to smart cities. “A postgraduate course on Computer Forensics has also been approved by the Ministry of Higher Education, which focuses on equipping students with critical knowledge for collecting and preserving sophisticated digital evidence when investigating cybercrimes.
“A new modern, 7,000 square metre block is expected to be inaugurated in November, and in-campus hostel facilities will be ready by mid-2017. The college is all set to welcome our new batch of students with a week-long orientation programme filled with activities,” he said.
Additionally, GUtech has plansto start new BSc and MSc programs soon. “The university is also planning to introduce MSc courses in geosciences, in architecture, computer sciences and in engineering in the coming years, and PhD programmes are planned, as well.
In the coming weeks, a group of students will participate in a laboratory course at the engineering department of RWTH Aachen.