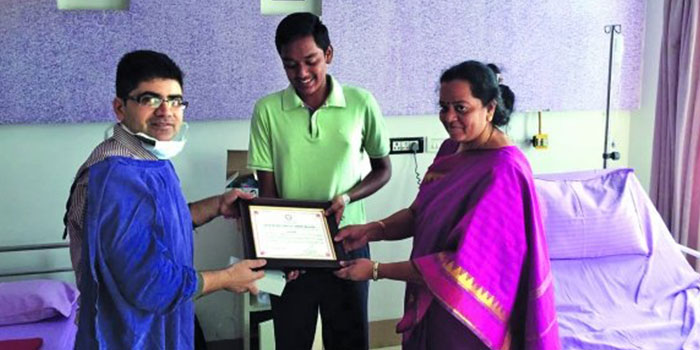 Muscat: A former Indian school student in Oman has saved the life of a four-year-old boy by donating his stem cells during a bone marrow collection procedure on Saturday in India.
Aadhithya Dinesh, the 18-year-old former Indian School Wadi Kabir student who is currently pursuing an engineering degree in India, donated his stem cells after a match was found by a stem cell donor group, which was considered a 150,000-in-one chance, to save the four-year-old boy’s life.

Dinesh Souderajan, the father of Aditya, said that they are happy to see that their son has done a selfless service to save a child’s life.
“Aditya has the habit of donating blood periodically.
“He might have learnt it from me. He had donated blood in college during a blood donation drive. The hospital authorities, who were looking for a match, found that my son’s blood samples were matching perfectly,” Dinesh said.
“When the medics approached him, he was keen to donate. He asked us, and we were a bit worried in the beginning. However, later on, we found that there was no harm. It is for saving a life, so we agreed,” Dinesh added.
As the child was in Bangalore, the capital city of Karnataka, Aadhithya had to travel from Chennai, where he is pursuing his engineering course.
“The procedure was done yesterday. The recipient is fine now. Aadhithya will travel back to Chennai tonight (Sunday),” Dinesh added. Peripheral blood stem cell (PBSC) donation is one of two methods of collecting blood-forming cells for bone marrow transplants.
The same blood-forming cells that are found in bone marrow are also found in the circulating (peripheral) blood. The donation is a nonsurgical procedure.