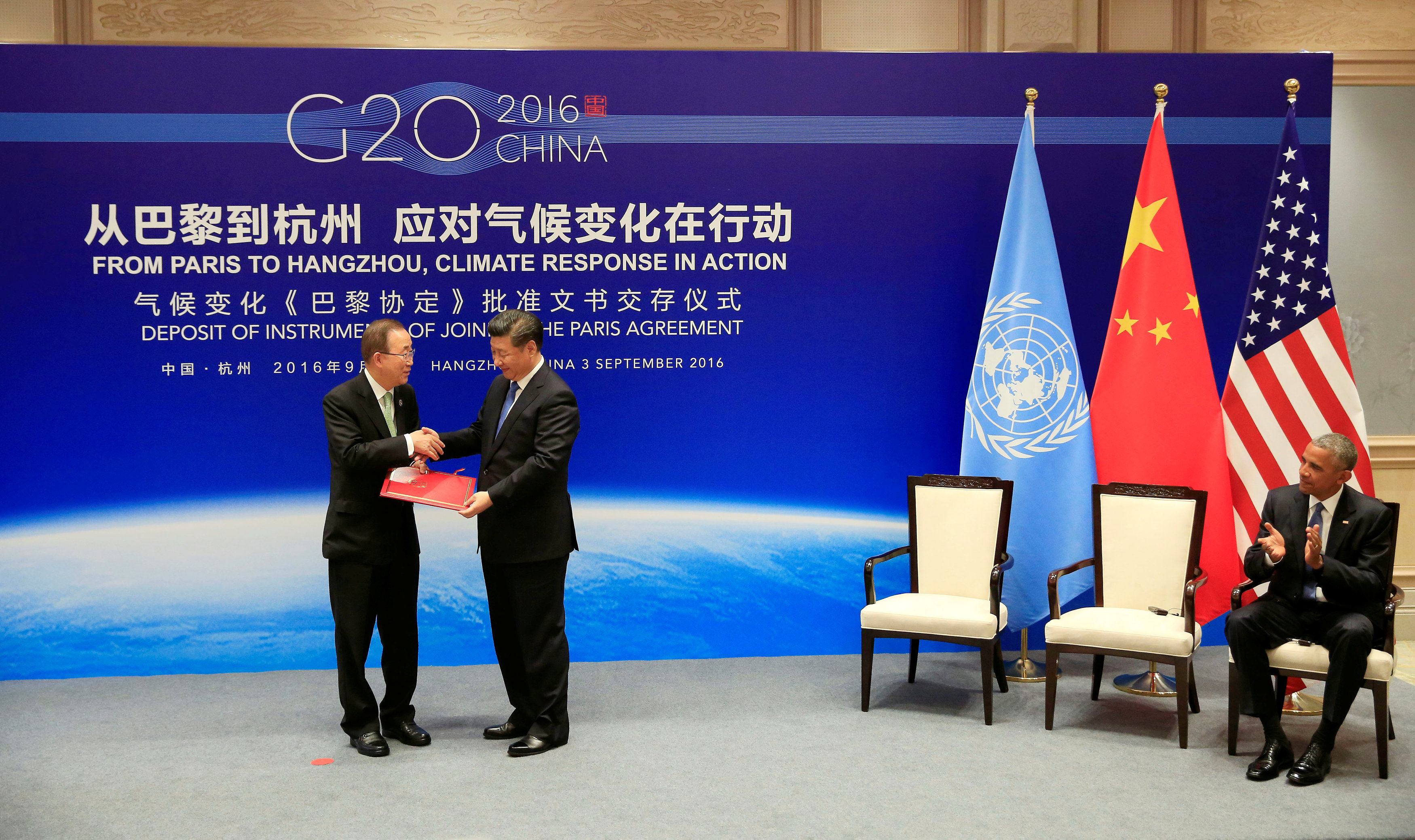 Hangzhou (China): China and the United States ratified the Paris agreement to cut climate-warming emissions on Saturday, marking a major step toward the enactment of the pact as early as the end of the year and setting the stage for other countries to follow suit.
The world's two biggest emitters of greenhouse gases made the landmark announcement as heads of state from the Group of 20 biggest economies, or G20, arrived for a summit in the city of Hangzhou, parts of which resembled a ghost town as Chinese security locked down the area.
US President Barack Obama's last scheduled trip to Asia before leaving office however got off to an awkward start.
Soon after Air Force One landed, a Chinese security official blocked National Security Adviser Susan Rice on the tarmac, speaking angrily to her before a Secret Service agent stepped between the two.
China has gone to great lengths to try to make the Sept 4-5 G20 summit a success, hoping to cement its standing as a global power, but a range of thorny diplomatic topics could overshadow the agenda.
G20 leaders are likely to renew their promises to use tax and spending policies to invigorate the sluggish world economy, although a new pro-growth push was unlikely.
Overcapacity in the global steel industry, a sore point for China as the world's largest producer of the metal, barriers to foreign investment and the risk of currency devaluations to protect export markets will also figure in the discussions.
Beyond economics, there may be friction over territorial disputes in the South China Sea and a US-South Korea decision to deploy a missile defence system in South Korea to counter missile and nuclear threats from North Korea.
When Obama met Chinese President Xi Jinping, he told him they would have candid talks on cyber, human rights and maritime issues.
Nevertheless, the climate deal set a positive tone.
"Just as I believe the Paris agreement will ultimately prove to be a turning point for our planet, I believe that history will judge today's efforts as pivotal," Obama said after he and Xi handed ratified documents to UN Secretary-General Ban Ki-moon.
"We have a saying in America that you need to put your money where your mouth is.
And when it comes to combating climate change, that's what we're doing.
Both the United States and China, we're leading by example."
At a joint ceremony, Xi said it "speaks to the shared ambition and resolve of China and the United States in addressing global issues".
French President Francois Hollande said it was an important step that would pave the way for the implementaton of the Paris agreement at the end of the year.
The stakes are high for China to pull off a trouble-free G20 summit, its highest profile event of the year, and security in Hangzhou was intense.
Volunteer security agents prevented journalists from filming in deserted parts of the normally bustling city of 9 million people.
Residents left in droves after authorities declared a week-long holiday for the summit, shut down the city's famous West Lake beauty spot and offered free travel vouchers worth up to 10 billion yuan ($1.5 billion) to encourage people to visit out-of-town attractions.
More than 200 steel mills in surrounding districts were shut as part of a bid to limit pollution.
With the summit wedged in between the Brexit vote and the U.S.
presidential election, G20 leaders will be keen to mount a defence of free trade and globalisation.
Concerns about subduded growth will be a major concern.
The world's biggest economies have pulled out the monetary policy stops to promote growth, but central banks are now "pretty close" to the limits of their ability to stimulate economies, said Angel Gurria, head of the Organization for Economic Co-operation and Development (OECD).
In the absence of "breakthrough, collective" policies, global growth was likely to remain weak, he told Reuters.
"We have left our good central bankers to do all the heavy lifting."
In separate remarks to Reuters, Pascal Saint-Amans, the director of the OECD's Centre for Tax Policy and Administration, addressed the thorny issue of multinational corporate tax liability, which the European Commission's recent decision against Apple Inc has brought into sharp relief.
The European Commission said this week that Apple owed up to 13 billion euros ($14.50 billion) in back taxes to Ireland, based on existing regulations, a decision that both Apple and Ireland, which relies on low taxes to attract investment, have vowed to fight.
China is using the G20 to push its diplomatic agenda with a raft of bilateral meetings.
China and Turkey pledged earlier in the day to boost counter-terrorism ties, setting aside previous disagreements over China's treatment of a Turkic-speaking Muslim minority.