Out comes the broad sword for once powerful maverick Altaf Hussain 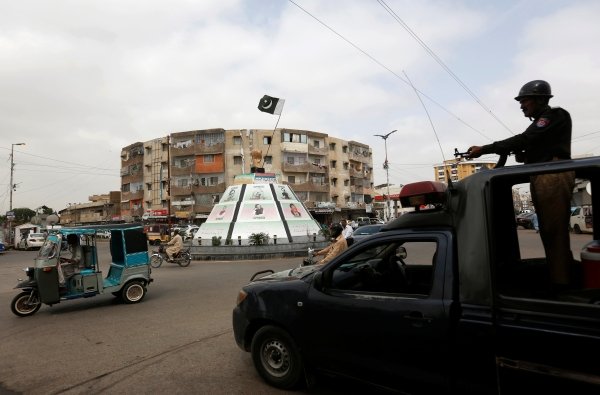 As Bob Dylan famously alluded, The Times They Are A- Changin’. The one political party in Pakistan — Muttahida Qaumi Movement (MQM) — that was long given up by all stakeholders as being ever amenable to change has, apparently, changed!
No-one in their wildest imagination would have conceived it would come to the pass it did last month when, in a fit of unbridled rage, its maverick supremo Altaf Hussain — living in self-exile in London for nearly a quarter of a century — launched into an incredulous tirade against Pakistan before inciting his party activists to attack media houses that are under court orders not to broadcast his vitriolic speeches.
To be sure, Hussain, who is now a British subject, has long remote-controlled Karachi even from his faraway London abode, but this time, he seemed to have overdone the breach by a quantum leap, and which clearly was so outrageous in its sweep that it has apparently, cooked his goose.
Sick and tired of Hussain’s shenanigans, even the hitherto fearful Rabita Committee of the MQM, which has had little utility other than serving their master’s voice, was forced to publicly dissociate with him in a spectacular turnaround on live television.
The ‘divorce’ appears to have been reinforced particularly after his name was struck off the party constitution and veto powers withdrawn although it is such a telling reminder of Hussain’s overbearing one-man show for nearly three decades that all comers are finding it hard to believe, or, to be more precise, if it will indeed hold.
Ever since Dr Farooq Sattar, MQM deputy convenor, who long supervised the show at Hussain’s command, finally summoned the courage following consultations with his colleagues, to announce the ‘divorce’, he is being bombarded with pointed questions about the action being even real and, if so, its shelf life!
It is not difficult to fathom why that is so. The fact is that the MQM has, ever since its inception, been completely dominated by the cult of Altaf Hussain to the extent that any member had until now owed his or her allegiance to him, not the party.
Over time, the string of assassinations of party leaders who dared dissent with the supremo, never mind opponents, is legion though until last year when the military launched the still ongoing operation in Karachi, the subject had remained taboo given the party’s stranglehold over the port city. Like the MQM itself, the media, too, was scared to venture into the territory and sure enough, had a body count to show for previous “indiscretions”.
The apparent volte face in the MQM, therefore, is a hugely interesting subject for both its immediate political and historic aspects, and certainly one that has far reaching consequences for the future of politics in Karachi, the financial lifeline of the country and one of the world’s preeminent megapolises that is home to more than 24 million citizens.
Over decades, political parties who have ruled the Sindh province have been at the mercy of MQM thanks to its feared structure that their opponents and critics allege was run Mafioso-style to leverage deadly influence. To its fortune, the party also found its utility for the powerful security establishment, which typically used its muscle to cut down parties — like the People’s Party — to size. Generals, Ziaul Haq in the 80s and Pervez Musharraf in the late 90s until his rule ended in 2008, gave it a virtual freehand as a countervailing force to political parties they wanted to control.
The MQM used the opportunity to arm itself to the teeth in more ways than one and almost always managed to force successive provincial governments to give into their demands in order to keep the city’s peace. Hussain’s sway until last year was so palpable that he could bring the city to a grinding halt on whim.
Last year, when the Rangers raided the once untouchable, near-venerable Nine Zero, headquarters of the MQM, arresting hundreds of activists and recovering caches of arms, a certain myth of invincibility was busted. This last fortnight, Hussain’s posters and life-sized cutouts have been brought down with some zest. In its sweep, this is a seminal moment, with many finally finding hope that one man’s diktat that ate into the citizenry’s lives may be coming to an end.
The big question, of course, is how long can or will this sustain, if at all. A contrite Hussain, for now, has acquiesced to the Karachi-based Rabita Committee, but this has happened with no small melodrama in the past, too, only to be reversed pantomime-like. This is going to be one helluva of ride in the days to come. Stay tuned!
• The writer is senior journalist based in Islamabad.