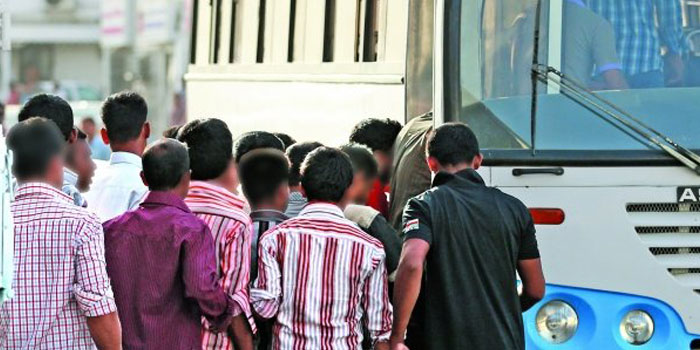 MUSCAT: More than 13,000 expatriate workers have been arrested for labour law violations during the first eight months of this year, Ministry of Manpower data shows.
10,452 expatriate workers were arrested in Oman for violating labour laws during the first six months of this year.
And data uploaded by the ministry on its official twitter handle every week during July and August reveals that around 2,700 were arrested over the last two months.
The statistics make grim reading for those arriving in the Sultanate and attempting to work without proper paperwork.
An Oman Chamber of Commerce and Industry (OCCI) member, however, feels that the issue lies in obtaining proper visas in the first place.
Mohammed Hassan Al Ansi, senior official at the OCCI, said that if the labour offices issue visas required by employers this can be avoided.
“If labour offices issue sufficient visas required by companies, then they won’t be forced to hire workers on different visa status,” the OCCI member said, adding that big companies are doing big projects and they are not getting enough clearances.
According to Oman Labour Law Article 114, a non-Omani employee who works in Oman, without a licence from the concerned directorate, or works with any employer, other than the employer who obtained a licence to bring him to the Sultanate, shall be punished.
According to the ministry’s own data, around 19,000 violators were arrested in 2015.
Out of the 19,056 labour law violators, 13,172 were Bangladeshis, 1,728 were Indians and 2,913 were Pakistanis. The remainder were designated as other nationals.
Out of the 19,056 arrested, 9,389 were deported.
Shahswar G Al Balushi, CEO, Oman Society of Contractors, said that restrictions in place on visas are leading companies to hire workers on different visas to get the work done.
“In construction sector too, serious companies are not getting enough visas cleared by the ministry. This is forcing them to hire workers from outside to get the work done. This leads to violation according to the law,” the CEO said.
The CEO added that to sort this problem to an extent, they have come out with a plan to create a single nomenclature for construction workers under which 66 jobs will fall.
“This will resolve the problem up to an extent. A plumber or an electrician in construction sector will have job status as construction worker in the visa and labour card. This will avoid legal actions if a worker does plumbing job and at the same time electrical work,” the CEO.
According the CEO, the plan is with the Ministry of Manpower.
Shaji Sebastin, an Indian social worker in Oman for the last 30 years, said that expatriates coming to Oman should be aware of the local law so that they are not caught for violation.
“He should not come on a “free visa”. He should also make sure that he has the job status he had applied for. I don’t disagree with the right of a worker to work, but in addition to that if there are certain rules in place in a country they have to be followed. Before accepting a job, the worker should check everything,” the social worker said.
A H Raja, vice president of Pakistan Social Club, also voiced the same opinion.
“People living here should obey the law and the land. And if someone is violating the law, he should be punished so that others learn a lesson and won’t repeat such a mistake,” he said.
“They should come on correct visa and work where they are entitled to. This would pose no significant legal risks at work,” social workers say.
Meanwhile, a trade union leader said that government may be intensifying raids to streamline the labour market as the economy is not doing well due to low oil prices.
“I feel that this won’t resolve the issue. Fundamental changes have to be made in the system to resolve the labour market, which will help both employer and employee,” Saud Salmi, the trade union leader, added.
In May, a top official at the Ministry of Manpower said that government raids to catch expats working with incorrect visas will be intensified.