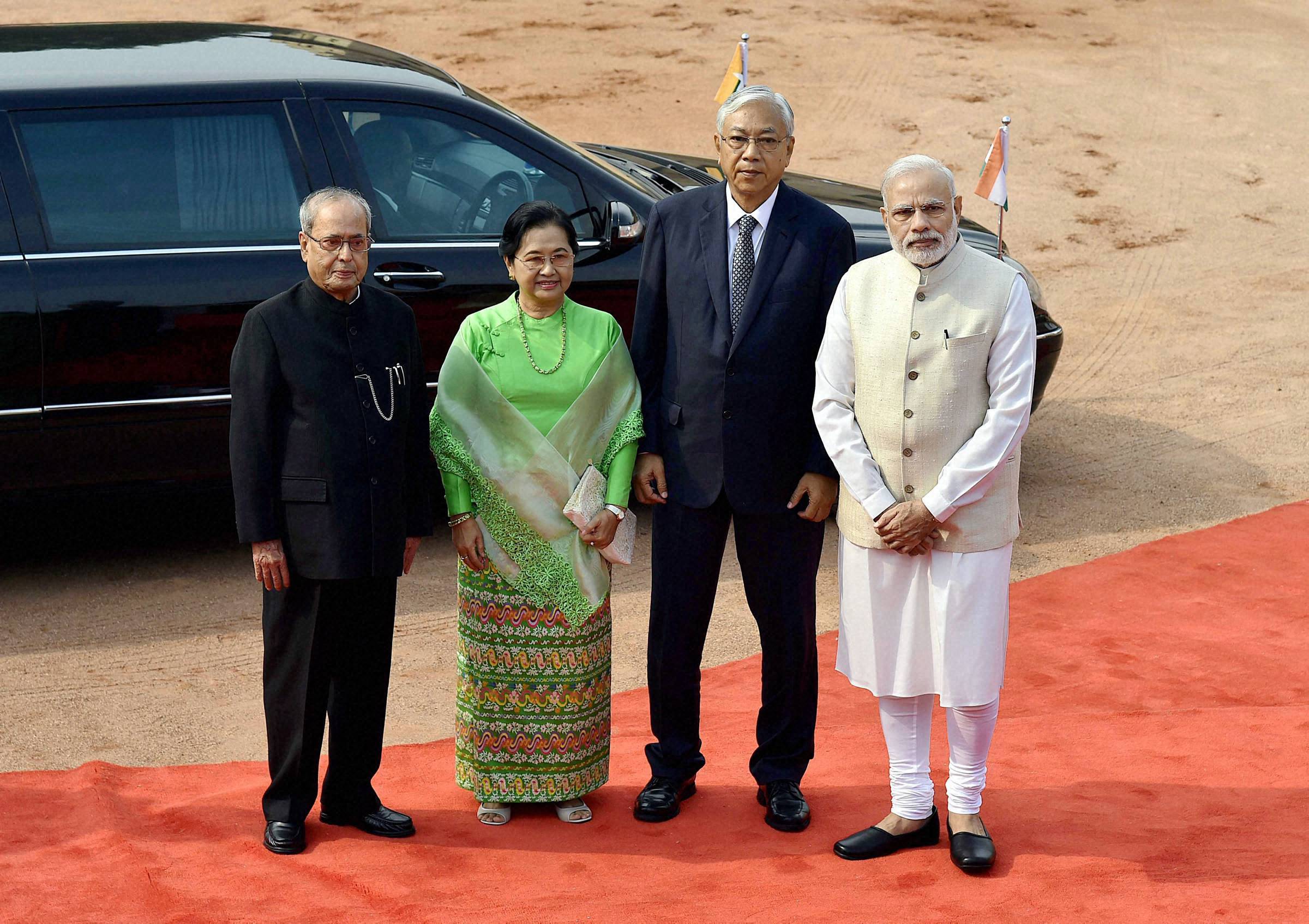 New Delhi: President Pranab Mukherjee has said Myanmar comes first on India's horizon when it comes to its 'Neighbourhood First' and 'Act East' policy even as he said the two neighbours are committed to according special attention to the economic progress of the border areas.
He made these remarks while hosting a banquet for visiting Myanmarese President U. Htin Kyaw and his wife at Rashtrapati Bhavan on Monday.
Mukherjee said his country would like to see Myanmar as "India's gateway to Association of Southeast Asian Nations(ASEAN) and India as Myanmar's bridge to South Asia".
The president thanked the Myanmarese leader for choosing India for his first bilateral overseas visit as the Head of State of Myanmar. He said this step was fitting, considering the bonds of friendship, culture, spirituality and history that unite India-Myanmar as he congratulated his counterpart on the historic victory of the National League for Democracy in the general election held in November last year.
"India sees Myanmar as a key partner in its 'Neighbourhood First' and 'Act East' policy. As the government of India looks eastward to rejuvenate historical, cultural and commercial links between India and Southeast Asia, Myanmar is the first on our horizon.
"India attaches high value to Myanmar's contribution and further role in achieving our shared vision of stability, peace and progress in the region," he said.
Mukherjee said India welcomes the bold step taken by State Counsellor, Daw Aung San Suu Kyi in initiating an inclusive process for peace through the 21st Century Panglong Conference.
"With regard to our common security concerns and our joint efforts in the area of border management, we have agreed to accord special attention to the economic progress of our border areas, that will transform them into zones of peace and prosperity," he said.
Referring to the old bonds between the two nations, Mukherjee said India shares a "long-standing historical and cultural relationship with Myanmar which has been cemented by our shared struggle against colonialism".
"India has been consistently supportive of Myanmar's progress from military rule towards democracy in recent years guided by the wisdom of its civilian and military leaders and the political sagacity of Daw Aung San Suu Kyi who led the democratic forces.
"As a close friend and a country whose democratic institutions have matured over the years, India celebrates Myanmar's success and will continue to support Myanmar in strengthening democracy in their country. India is committed to assist in any way that India can in the development and initiatives for the progress of the people of Myanmar," he said.
The president said India looks forward to work with Myanmar in areas that it has prioritised such as infrastructure development, connectivity, capacity-building, education, healthcare and the setting up of small development projects.
"Government of India stands ready to extend unstinting support whenever, wherever, and however Myanmar desires it for achieving the aspirations of its people and the policies of Government of Myanmar," he said.