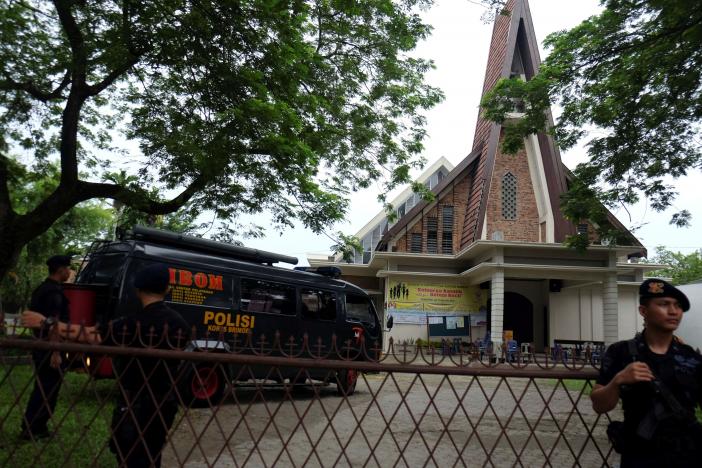 Medan: Indonesian police were investigating a suspected terror attack by a knife-wielding assailant on a priest during the Sunday service at a church, and a bomb squad had been deployed to determine whether the attacker's backpack contained explosives.
There were no serious casualties, though the priest and his attacker suffered minor injuries, according to police in Medan city, northern Sumatra.
"A terrorism act was carried out on Sunday morning at the Saint Joseph catholic church," said Rina Sari Ginting, spokeswoman for Medan police in a statement. "Police are interrogating the perpetrator... and will search his house for any bomb-making materials."
A witness present in the church told Reuters the attacker had sat with other worshippers before running toward the priest.
"There was a small explosion like fireworks and he also took out a knife as he ran toward the priest," said Timbas Ginting.
A bomb squad was sent to the site to check whether the assailant was carrying explosives, in case the attack was a failed suicide bomb attempt.
"What's clear is that the pastor was threatened, and (there was) an attempt to hurt the pastor," Fahrizal, the head of criminal investigations for police in Medan, said.
Indonesia has the world's largest Muslim population and the vast majority practice a moderate form of Islam. But there has beeb a resurgence in fundamentalism during recent years, inspired in part by IS groups like al Qaeda and IS.