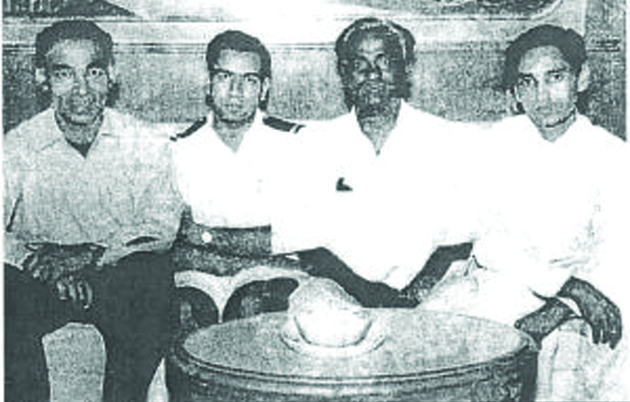 I am the most fortunate hockey player as I grew up under the guidance of ‘Wizard of Hockey’ Dada Dhyan Chand. It was my uncle Syed Ameer Ahmed, principal of Govt. Husainabad High School Lucknow, who himself had represented th UP state cricket team, had spotted me playing hockey with Govt. High School, Sitapur against Lucknow teams. I was adopted and he got me Higher Studies in Govt. Jubilee Inter College Lucknow, which was a leading college for all sports.
In 1949 I was introduced to K.D Singh Babu, another legend who had played along side Dada Dhyan Chand and Dada Kishen Lal. I like to mention an environment of hockey where I grew up. In 1951 K.D. Singh Babu recommended me to Dada Kishen Lal, who was the 1948 Olympic captain and was playing for then BBCI Indian Railway now the Western Railways. It was in 1953, Dada Dhyan Chand Memorial Hockey at the National Stadium in Delhi. I had the opportunity to play outside right for Western Railway. Being new in Delhi, the press lauded my performance. It was the honour of Western Railway which had won the inaugural Dhyan Chand tournament by defeating Kirkee United 3-0.
Late in the evening team manager Cyril Pearce, a former international umpire, had invited Dada Dhyan Chand for the celebrations, during which ‘Dada’ expressed his desire to meet a new young face (Naqvi). I was introduced to the legend in front of big audience who had appreciated his gesture.
Dada Kishen Lal as a mark of respect used to called me ‘Mian Sayed Sahaib’ and during that day’s celebrations, Dada Dhyan Chand gave me another nickname ‘Maluna’. From then on I was known in the hockey circles with that name.
Later, Dada Dhyan Chand had invited Dada Kishen Lal and me to his official residence in Safdar Ganj (Military Barracks) for lunch, a big honour considering he was in very close circles of the then prime minister Jawaharlal Nehru. In fact, at one such tea party, I also had the opportunity to see Mrs. Indra Gandhi. In the later days, Dhyan Chand used to visit my residence at Matunga Railway Blocks in Bombay and it was a coincidence that beside my flat was Dada Kishen Lal’s flat.
In those days, Dada Dhyan Chand used to coach Services XI while Kishen Lal used to be in charge of Western Railways or Railways XI. But the teams used to practice together and Dada Dhyan Chand used to play in the practice matches, giving valuable guidance to young players.
The cut the long story short, it was Dada Dhyan Chand who advised me to take up coaching.
After his retirement from Services, on Field Marshall Manek Shaw’s recommendation, Dada Dhyan Chand was named as the Chief Coach of National Institute of Sports (NIS) in Patiala. But before his retirement from the NIS, he advised me to join the coach’s course there.
In 1973, he had seen me with the Indian team as their assistant manager and coach at NIS Patiala and Calcutta, and At 1975 World Cup brief Camp in Patiala.
It was Dada Dhyan Chand’s most kind gesture who along with Dada Kishen Lal met the Secretary General of Railway Sports Control Board Matti Lal and recommended that I should be nominated for the 1975-1976 coaches courses.
That’s how my coaching career took off and I started a new and challenging journey that brought me to Oman, to serve the Sultanate first as the national hockey team coach and as the technical advisor of Oman Olympic Committee.
I owe my present sports career to three hockey legends Dad Dhyan Chand, Dad Kishen Lal and K.D. Singh Babu, all Olympians who served Indian hockey with distinction.
On this occasion, as we celebrate Dada Dhyan Chand’s birth anniversary, I would like to express my gratitude to all three greats.
I will always cherish my association with Dada Dhyan Chand. Here in Oman, we (Friends of Naqvi Group and Team Coorg) have been organising the Dhyan Chand Trophy hockey tournament for the past seven years.
I am pleased to announce that we will be organising the event this year too in association with Indian Embassy and the Oman Hockey Association.