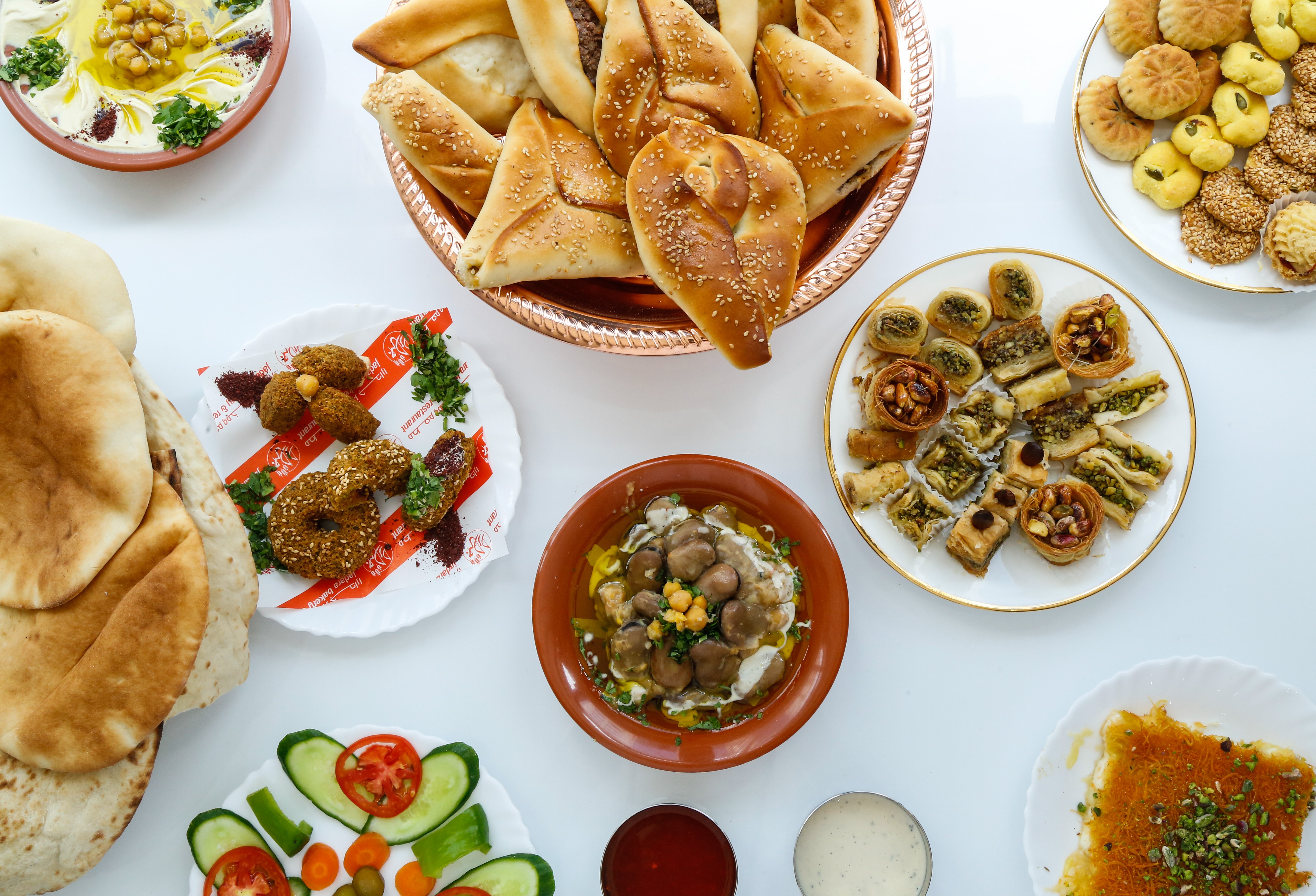 ‘Sahtain wa Afiyah’, said one of the Jadara staff as he placed a plate of warm, luscious-looking kanafeh on the table. It was the final touch on the bounty of vibrant colours and irresistible aromas set out before us. From one corner of the table to the other, platters of different shapes and sizes jostled for space. There were shawarmas and falafel, hummus, ful medames and khubz, pattice rolls, and an enormous platter of mansaf, that beloved Jordanian specialty of lamb slow-cooked in dehydrated yoghurt and served on a mound of rice. If it was to taste half as good as it looked, I knew I was in for a memorable meal. The only question was, where to start?

If you are thinking this is an anecdote from a fine dining experience here in town, then you are in for surprise. Jadara Bakery & Restaurant, a welcoming new establishment serving fresh, authentic Jordanian, is just a small, simple storefront in the heart of Al Khuwair. But trust me, you won’t care about the ambiance or white tablecloths after you’ve had a taste of their fresh Jordanian delicacies, which are as opulent as many meals I’ve had in upscale establishments.

After a half hour inside the brightly lit little restaurant, as the staff busily rustled up our lavish spread, the wonderful smells of a bakery filled the air. Unable to resist my curiosity, I followed the whiffs and found myself peeking inside the open kitchen counter at Jadara’s best kept secret — the hot stone oven where the baker stood pulling out perfectly crisp rounds of bread.

“Jadara Bakery and Restaurant is an authentic Jordanian restaurant and bakery, one of the first of its kind here in Muscat,” said Ashraf Ali Al Heilat, General Manager of Abraj Oman International LLC, the parent company of Jadara, who had walked up behind us. “Bread is very important in Jordanian cuisine and they are served with just about anything you eat, mostly used to scoop up the different dips,” he explained.

Back at our table the typical Jordanian mezze had arrived, including hummus, a puree of chickpeas blended with tahini, lemon, olive oil, and garlic; falafel, a deep-fried patty of ground chickpeas and spices; fresh chopped vegetables and olives; all served with freshly baked, golden circles of crisp pita bread.

Next up, a platter of shawarma sandwiches arrived. As in most Middle Eastern countries, shawarma is a popular, casual food in Jordan. Here at Jadara, the spiced, roasted chicken slices are wrapped in flat bread with a touch of cheese, and the whole sandwich is then grilled to crispy perfection and served with a side of tasty fries and pickled vegetables. It was my first experience with cheese shawarma, and despite being sceptical about the combination, it was totally delicious.

What came next captivated our attention entirely. A heaping platter of mansaf, the national dish of Jordan, which is usually only made for special occasions. Prepared by simmering lamb with fresh herbs in jameed (dried yoghurt), the tender meat is served atop rice which is served atop a base of thin khubz bread. The dish is finished with a sprinkle of a toasted almonds and pine nuts.

The traditional Bedouin dish is usually eaten by hand, the platter shared by an entire family or group of friends. Despite the fact that the lamb pieces were huge, the meat was soft and done to perfection. Pulling apart the tender pieces of meat, so rich and plentiful, was an experience in and of itself. “Having mansaf is like having Jordan in one bite,” Ashraf said, smiling.

As we ate, more dishes arrived, and with each one Ashraf shared more about Jordanian cuisine and the culinary influences on the foods from the kitchens of North Africa, the Middle East, Persia, and the Mediterranean. “You might think, ‘why ful medames is in a Jordanian restaurant? Isn’t it from Egypt?’ but it is an extremely common dish in Jordan too and like ful medames there are many Jordanian food that might not have originated in Jordan, but have been imbibed so well over the years that you cannot separate it out from our traditional cuisine,” he explained.

As our meal began to wind down, plates of Jordanian cookies and baklava began to appear, then came the steaming, massive slice of kanafeh. Cheese is the most important ingredient in kanafeh, which is a popular Leventine dessert of soft, stringy, slightly salty cheese topped with semolina cake, soaked in sugar syrup, and finished with a pinch of ground pistachios. Jadara claims to have the best kanafeh in town, bringing many of the key ingredients, including the cheese, all the way from Jordan to maintain the dish’s authentic taste.

Full and happy, we stood to leave Jadara. As we walked towards the door, the man who had greeted us, held the door open. I stopped and turned to him. “One last question,” I smiled, “what does Sahtain wa Afiyah, mean?”
“It is a term we often use when we serve a meal,” he replied, “It means, wishing you health and wellness.” Delicious, authentic, Jordanian food and warm wishes — what more could a diner ask for? —[email protected]