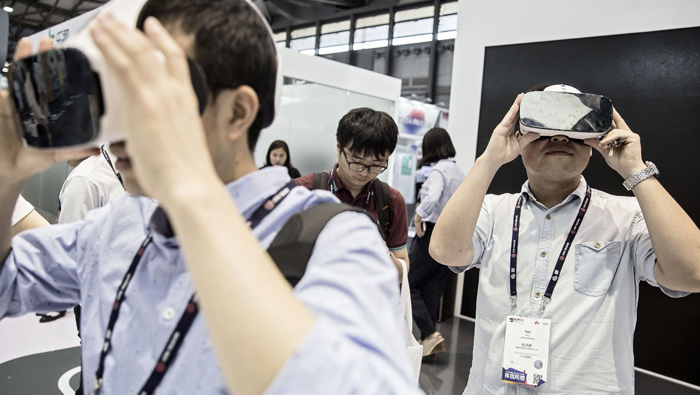 Los Angeles: Google is investing hundreds of thousands of dollars apiece in virtual-reality films and programmes, part of a plan to line up exclusive content for the debut of its new Daydream service in the coming weeks, according to people familiar with the matter.
Google will help promote projects from Hulu and fund the production of 360-degree videos with YouTube stars like the Dolan twins and Justine Ezarik, said the people, who asked not to be identified discussing private deals. The division of Alphabet has also partnered with video-game producers and sports leagues to boost its biggest virtual-reality initiative.
"It’s apparent they’ve spent a lot of money internally,” said Finn Staber, co-founder of TheWaveVR, a virtual-reality startup developing a music app for Daydream.
The company is relying on apps, shorts and games to promote Daydream, a hybrid store and software service that Google hopes will be the dominant way people engage in virtual reality, much like Android is for smartphones.
An update to Android software that will support Daydream began rolling out Monday. The idea is to encourage the growth of the technology and ensure Google maintains a central role in helping people find things to watch.
Google is entering what has quickly become a crowded marketplace, with products from Facebook, Sony, Samsung and HTC. Whereas Sony’s Morpheus headset is tethered to its PlayStation video-game console, Google is focused on mobile-based VR, whereby consumers snap their phones into a visor or headset. With the headset on, Daydream presents users with an array of apps, from YouTube to HBO Now.
"Google’s Daydream will help advance mobile virtual reality,” said Oren Rosenbaum, a digital media agent at United Talent Agency who spearheads its VR effort. "Mobile virtual reality is what’s going to get the most people to strap things on their head.”
While competitors are targeting users willing to spend hundreds of dollars for top-notch VR equipment, mobile will reach mass audiences, Staber said. In June, he watched a live performance at the video-game expo E3 in Los Angeles from the comfort of his Austin home.
"It’s revolutionary,” Staber said, adding he and his partners had been collaborating with Google’s VR team over the past few months.
Google’s growing investment in virtual reality tantalizes filmmakers eager for more resources. While Facebook has spent millions of dollars on individual projects, most large media companies have been circumspect about investing too much money in a new storytelling medium with a small audience.
This being Google’s first major virtual-reality content initiative, the company doesn’t want to spend too much just yet and is spreading money around to see what works, the people familiar with the matter said. Google is spending high six figures on video games, and is offering from low five figures to low six figures for projects with filmmakers and online talent, the people said.
Filmmakers working with Google must use a 16-camera rig optimised for the company’s Jump software platform for virtual-reality content. GoPro is making one, called Odyssey, priced at $15,000. Though a few elite VR filmmakers have either balked at the budgets or the requirement that they use Google’s camera, dozens of filmmakers have signed up to work with YouTube, the people said.
YouTube won’t demand an ownership stake in the projects filmmakers create with its funds, since the Google division is more interested in encouraging creative people to produce content around the debut of Daydream to stoke awareness and excitement.
App lineup
YouTube will be one of dozens of apps available within Daydream, alongside HBO’s streaming service, Hulu and apps from sports leagues like the NBA and MLB. Google will co-market some of the programming. Though its projects won’t be exclusive to Daydream, Hulu will time the release of several pieces to the debut of Google’s platform.
Daydream will be introduced around the same time as the release of new Android phones, VR headsets and controllers. The latest version of Android has VR-enhancing features including faster graphics processing, quicker head tracking and better use of data from multiple sensors.
Google had been working on its own headset, but the company has mainly focused on reference designs for headsets, and controllers, for other companies to build their own VR devices. It would rather turn Daydream, known to some as Android VR, into the dominant interface for virtual reality.
Google designed a controller to make mobile-based VR more interactive. With a headset on, people can use the remote to navigate and select apps. The company is offering creative and financial support to apps that use its controller, such as Tilt Brush, a painting app it purchased in April 2015, and the Wave, which enables DJs to create and perform music live for people wearing headsets either in the audience or sitting at home. "They want more content in the store to get people talking,” Rosenbaum said. "Google investing in the space continues the momentum and growth we’re all expecting.”