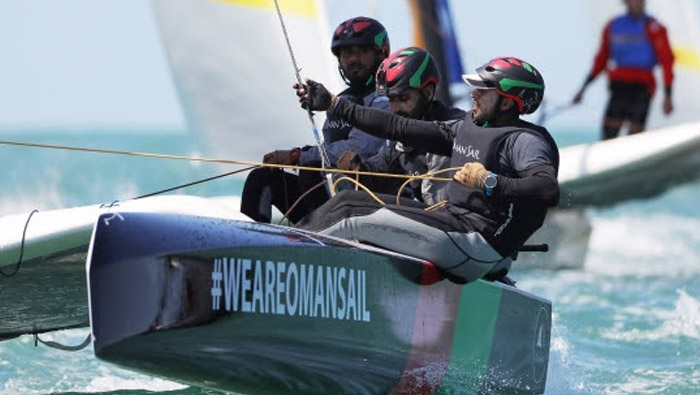 Fécamp: The Oman Sail teams competing on the gruelling Tour Voile showed true grit and determination to finish the second Act of the marathon 17-day event with another set of impressive performances. In particular the Renaissance Services team demonstrated real resilience to rebound from a crushing disappointment to win the Tuesday final.

The crew of skipper Stevie Morrison, Quentin Ponroy and Abdul-Rahman Al Mashari had gone to the second venue of the Tour holding a hard-fought third place in the 23-strong fleet after three days of short and sharp inshore ‘stadium’ races at the opening Act in Dunkerque.

However, equipment failure – in the shape of a broken rudder – saw them forced to retire from Monday’s long 40km coastal race at Fécamp, which dropped them down to 11th place.

Morrison immediately pledged the team would “fight back” and they did so with outright victory in another day of stadium races, making Renaissance Services the first team on the Tour to win two finals.

“It was a good comeback for us – you don’t really have any choice but to go out and do your best again the next day, and keep fighting, and the boys did that really well,” said the British Olympic sailor.

“We are still bitterly disappointed about Monday because it was just a small thing that turned into a massive thing, and with only that one long race in the day you get punished very hard.

“One of our strengths is that we all trust each other, and we can take the rough with the smooth and know that we are there for each other over the course of the whole event, so for me there was no doubt that everyone would turn up firing – though of course it’s nice to prove that.”

The Tour Voile mixes stadium and coastal racing across seven venues around France. On stadium race days the fleet is divided into two groups, with the top four teams in each going to the final which decides the overall winner of the day.

Renaissance Services’ comeback takes them up to seventh place and back on track to help achieve Oman Sail’s goal of an overall podium finish in the Tour Voile to celebrate the organisation’s 10th anniversary.

The second race team – EFG Private Bank Monaco skippered by Pierre Pennec with Corentin Horeau and Hussein Al Jabri – are also poised to climb further up the leaderboard after a solid sixth place on the Fécamp coastal race saw them secure ninth overall, just a point behind Renaissance Services.

The development teams – the all-women crew on EFG Sailing Arabia The Tour and all-Omani squad racing Team Oman Sail – are also hitting their targets in a highly competitive international fleet.

“Both are happy,” said Morrison, “the boys especially with winning a race on Sunday and leading one Tuesday, though the girls perhaps of all the teams here are sailing at their absolute potential.”

The entire fleet of high-speed Diam 24 trimarans has been transported 230km by road to the third Tour Voile venue of Jullouville, near St Malo, where a second coastal race is scheduled for Wednesday and further stadium racing for Thursday. The Tour will then continue until the final day of racing in Nice on July 21st.