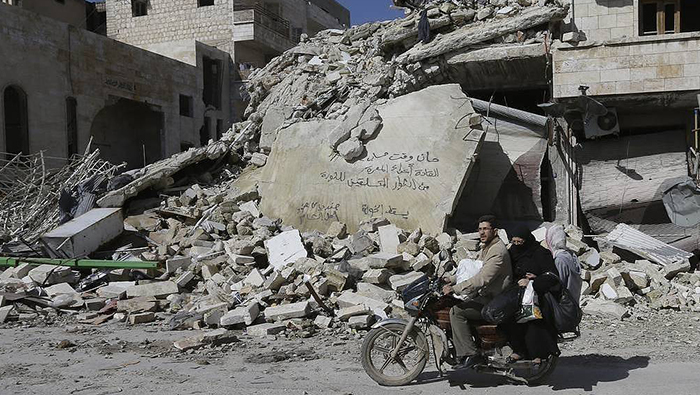 Damascus: Humanitarian assistance from Russia has been delivered to residents of the Hamuria neighbourhood in Eastern Ghouta, a suburb of the Syrian capital Damascus that was captured by militants and subsequently retaken by government forces during the Syrian conflict.
Sergei Maloletko, a spokesperson for the Russian Center for reconciliation of the opposing sides in Syria, said Russian servicemen are to distribute "over 2,000 food packages containing basic foodstuffs such as canned meat, rice, flour, sugar, tea." At least 500 families are to get the Russian aid. Hamuria was seriously damaged in the hostilities. The majority of those who came to receive Russian aid were women. "My husband and one of my sons died fighting against the militants. Luckily, Hamuria is now returning to a peaceful life. I’m a school teacher, and we will start teaching kids in September. We are very grateful to you for the food," a local woman said.
Another female resident described the situation in the region as critical: "We have no food, we survive only on products delivered by you or the Syrian government." "The majority of Hamuria residents are women and children," she added.
A team of Russian military doctors provided medical assistance to the residents. Meanwhile, up to 2,000 Syrian refugees return home from neighbouring states every day, the Russian and Syrian coordination headquarters said in a joint statement on Wednesday.
"Most Syrian citizens return from Syria’s neighbouring states. Every day, between 1,000 and 2,000 people come to the country from Jordan and Lebanon, confirming that the measures have been effective," says the statement signed by the heads of the Russian and Syrian coordination headquarters, Mikhail Mizintsev and Hussein Makhlouf.
More than 1.8 mn refugees have come back home, and over 1.3 mn of them are internally displaced persons and another 500,000 are refugees from other countries, the statement said. The Russian and Syrian Joint Coordination Committees said earlier that about 28,000 Syrian citizens remain in the Rukban refugee camp due to being unable to leave the area.
"About 28,000 Syrians who cannot leave its territory remain in Rukban in appalling conditions due to being hostage to the US-controlled armed groups," reads the document signed by the committees’ heads Mikhail Mizintsev of Russia and Hussein Makhlouf of Syria.