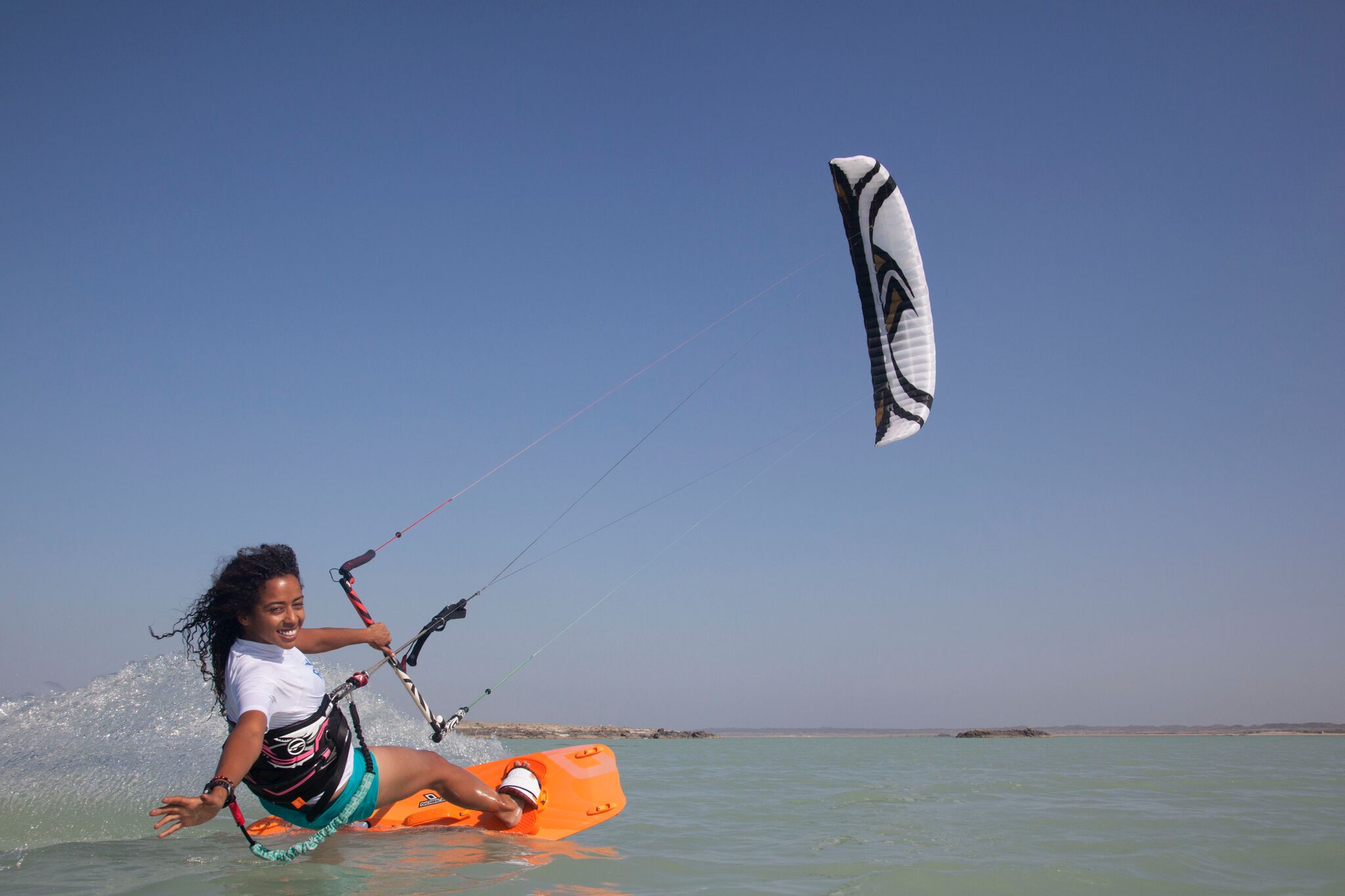 Kiteboarding is not a leisure activity. It is a professional sport which requires professional training. Luckily for thrill-seekers in the Sultanate, the eight-hour course where you need to start surfing the waves and wind is available right here in Muscat.

There comes a moment, as you balance on a plank carving through ocean waves at high speed, when you’re not sure if you’re flying, floating, or walking on water. In that moment, you can’t be certain if it is anxious beads of sweat or the ocean spray dripping from your forehead, and if you’re honest with yourself, you couldn’t really say if the sounds emerging from your throat are yells of excitement or fright. It is the rush of that moment that draws the brave and the reckless to the high-energy world of kiteboarding.

Kiteboarding is a professional adventure sport that uses a kite (duh) to pull the boarder over the surface of the water on a snow or surfboard-like platform. The kite can be controlled using a bar that is harnessed to the boarder’s body. If this sounds like a bizarre sport made up by kids on spring break, that’s probably because it kind of is. The very first trial of kite-boarding was done in the mid 1990s by a few adventure maniacs in Hawaii who wanted to create some new adrenaline-gushing activities.

Initially, it was practised in a haphazard manner without proper rules, techniques, or equipment, but by the end of the 90s, the first kiteboarding contest was organised by Red Bull in Hawaii, with proper rules and techniques in place, and by 2005, the improvements in kiteboarding safety standards had evolved to the point that the sport as a whole was technically sound enough to be promoted and taught to leisure boarders around the world.

Thanks to Oman’s favourable weather, a lot of tourists from different parts of the world plan vacations in Oman specifically to kiteboard the clear waters, and just this year, a freestyle kiteboarding contest was held in Masirah Island where a number of kiteboarders from around the globe showcased their stunts, spins, tricks, and rotations. Kiteboarding initially made its way to Oman in 2007, when the first certified kiteboarding centres in the Gulf were opened at Al Mouj and on Masirah Island. Kiteboarding-Oman, member of the International Watersport Association, offers a three to five-day course, totalling eight to twelve hours of training in theoretical and practical kiteboarding skills. Upon completion, participants are issued a license authorising them to kiteboard in any part of the world.

Kiteboarding is a challenging sport that requires discipline, skill, and practice, but the good news for many of us is that it does not really require strength or weight. The lighter you are, the easier it is for you to handle the kite. Hence, there are more women actively competing in the sport compared to men. (In Oman, presently there are 30 per cent women participating in the sport, though the female numbers are on the rise.)

The elements that you need to master before getting on to a board include: Flying a kite, understanding the concepts of aerodynamics, and learning board control. Since the kite (your motor, essentially) is solely dependent on wind power, there is never complete certainty about whether or not you can practice your sport on any given day. Rather than a frustration, most kiteboarders take it as a reminder to respect nature and to admire the strength and vulnerability of the natural world.

This is a sport created by beach bums, who firmly believe that ‘a bad day at the beach is far better than the best day at the office’. A sentiment I think we can all get on-board with. — [email protected]

Notes
• The only prerequisite to learn kiteboarding is that you must know how to swim.
• You don’t have to be physically strong to kiteboard, but you must be licensed.
• Everyday in Muscat is a great kite day.