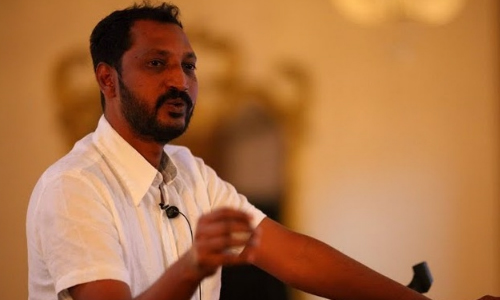 Chennai: National Award-winning Tamil lyricist Na Muthukumar died here today due to jaundice, sources close to his family said. He was 41.
Muthukumar had won two National awards for his songs "Ananda Yazhai Meetukiral" and "Azhage Azhage" in Tamil movies "Thanga Meengal" and "Saivam", respectively.
Born at Kancheepuram near here, he aspired to be a film director early in his career and had worked as an assistant to filmmaker Balu Mahendra.
He shot to fame with "Devadayayai Kanden," in Dhanush starrer "Kadal Konden" (2003) and his songs including "Kanpesum Varthaigal" in "7G Rainbow Colony" (2004) and "Veyilodu Vilayadi" from "Veyil" (2006) are very popular.
film director Seeman introduced him as a lyricist in his movie "Veera Nadai" in 2000.
Muthukumar has penned lyrics for over 1000 films and had authored a novel "Silk City."
Expressing grief over the death, DMK chief Karunanidhi said he was shocked by the passing away of the young lyricist.
BJP state unit president, Tamilisai Soundararajan visited Muthukumar's house and placed a wreath.
Speaking to reporters, she praised him and his work.
Celebrities from the Tamil film industry queued up at Muthukumar's residence here to pay their last respects.
filmmaker turned chief of 'Nam Tamizhar Katchi' Seeman said he was shocked by the death.
Actor Kamal Haasan took to Twitter to condole Muthukumar's death.
"Na Muthukumar died at 41. An important Tamil poet who also wrote for cinema. If he lived a little he'd have made the above intro redundant," he posted.
"Miss you my friend. Thanks for the words you left behind in print. Hope you enjoyed life half as much as we are going to enjoy your poems."
Actor Dhanush tweeted, "Rest in peace na.muthukumar.
Very shocked and saddened. Strength to the family."
Filmmaker AR Murugadoss said, "It's really shocking... No words."
Noted music composer Devi Sri Prasad said, "He gave beautiful lyrics for many of my Tamil Songs! Can't believe this news!.
May God giv Strength to his family.
"When I sing a tune, he used to spontaneously giv me the lyrics on spot!! A great Talent!! A deep loss for Tamil films."
Music composer and actor GV Prakash Kumar said, "Can't believe this #namuthukumar is no more... He's written more than 200 songs in my films A huge loss. May god give strength to his family."
Actress Tamannaah Bhatia wrote, "You will be missed! RIP to this great soul, my prayers with his family #Namuthukumar.
Just can't believe this."
Muthukumar is survived by wife and two children.