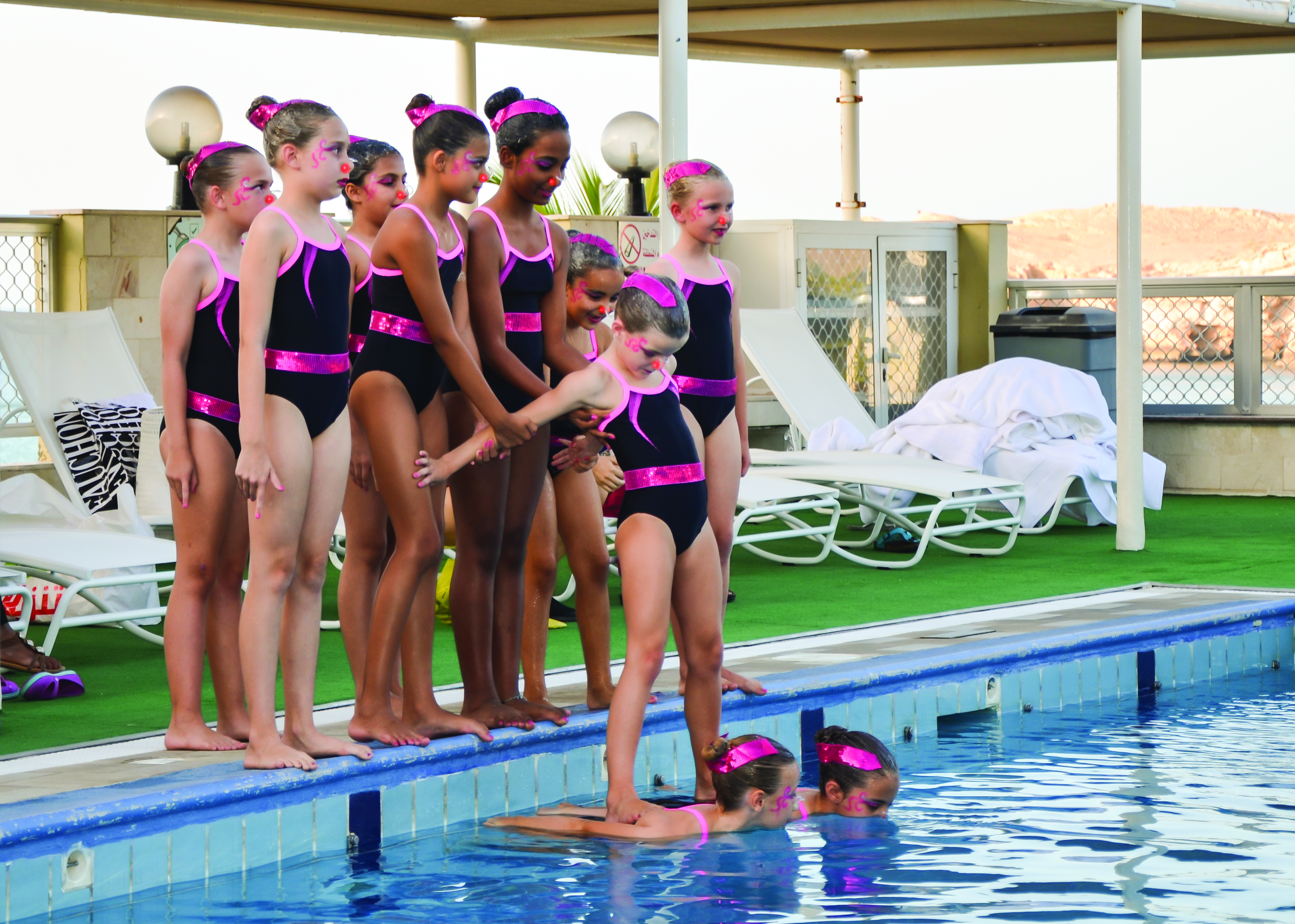 Synchronised swimming, a visual delight of grace and rhythm, is a sport which requires immense strength in order to synchronise each beautiful stroke into an aquatic, artistic formation. And now, young bathing beauties in Muscat can learn this classic artform.

A few months back the members of Ras Al Hamra Recreation Club (RAHRC) witnessed an exclusive spectacle in the pool. Ten girls, all between the ages of six and eleven, emerged poolside dressed in matching fuchsia and black costumes with ribbon sashes, hairpieces , and waterproof makeup. Their hair were gelled and rolled up in buns to keep it in place and they sported rubber nose-clips (to prevent water from entering their nostrils during their show).

The little mermaids were divided into two groups in the water. Then the music began. The girls moved in sync with each other and to the songs Cotton-Eye Joe and Happy, delighting spectators as they splashed into various formations in the water. A trio of girls completed the show by swimming to classic tunes from The Mask of Zorro.

The girls – Alix Dupont, Anna Lemos, Ella Wusten, Gargi Moghe, Hanna Van Doren, Julia van Bourgonje, Julia van Cuijck, Jumana Saada, Maria Crampin, and Saskia Tromp — had practised the techniques for days in order to showcase their skills in this rare sport exclusively performed by women. A hybrid form of swimming and dance, synchronised swimming or water ballet is a combination of dance and gymnastics, for which swimmers perform a synchronised routine of elaborate moves in the water, accompanied by music.

Even before it was formally named, the first water ballet was held in Berlin in 1891, but the formalisation of the artistic sport is attributed to Australian-born actor, professional swimmer, and inventor of the one-piece bathing suit, Annette Kellerman whose athletic prowess and beauty wowed the world in the 1900s. In 1907, her iconic underwater performances in a glass tank in London, New York, and Chicago, were groundbreaking for the sport, which continued to develop as an athletic and artistic endeavour.

Later in the United States, synchronised swimming was officially adopted as a competitive sport, but in order to be selected as an Olympic sport (before even being considered for a vote in), athletes had to demonstrate at the Games. After two decades of demonstrations, the International Olympic Committee accepted the duet event for the 1984 Olympics and later accepted the solo event as well. Making its first debut at the XXIII Olympiad in Los Angeles, synchronised swimming finally earned it's place on the world's sporting stage.

A sport of artistic discipline and strength, it is one of only two female-only Olympic sports, though men continue to try to break into the ranks of female synchronised swimmers. While they were allowed to compete at the World Aquatics Championships for the first time in 2015, men are still barred from competing in the Olympics.

While this sport is still in its infancy here in Muscat, Engy El Selouky, who started synchronised swimming when she was eight, going on to compete in national competitions throughout Egypt over the years, brought her beloved sport with her when she came to Muscat in 2015.

“I started training in Egypt as an assistant coach. In 2011, when I travelled to London, I joined Queen Mother Sport’s team as a synchronised swimmer. Then I trained the synchro team, for girls under 18 years, joining the local clubs competitions,” Engy, explained. “In 2015, when I joined Ras Al Hamra Recreation Club (RAHRC) this sport did not exist in Oman. When I first advertised for it in the club, I got 80 girls who were really interested to join. First, I did an assessment for them, and I only chose ten out of them to be trained once a week due to the limited timing available for the pool. I started training these ten girls in October 2015, and by end of May, they did a wonderful show. This was the first synchronised swimming show in Oman.”

Engy describes this beautiful water sport as one which demands advanced water skills, immense strength, and endurance. Essentially pool-based gymnastics, swimmers perform choreographed moves on and under the water to a musical soundtrack. The swimmers have to master several key skills, including the 'egg beater kick' which allows the performer to remain above water and while leaving their hands free to perform strokes with music. "But the most important skills in water ballet are flexibility, grace, artistry, and precise timing," she said. “One should also acquire exceptional breath control when upside down underwater,” she added.

As the first instructor for the sport in Oman, Engy works only with girls between six and eleven years old, and by the time they start with her, they already must have a solid foundation.

“Beginners should know how to swim freestyle and back stroke, also playing gymnastics can give them an edge in the water. Girls can start by improving their swimming in different strokes, also playing gymnastics and ballet would help," she offered.
"I don't want to be just a pretty fish," declared the original mermaid, Annette Kellerman, in 1914. The decades have favoured her memory, as this lovely sport has proved to be about far more than beauty. An amalgamation of art and dance choreographed to music, synchronised swimming is just as much about remarkable feats of strength and flexibility, which, in my mind, makes it the ultimate female sport. —[email protected]