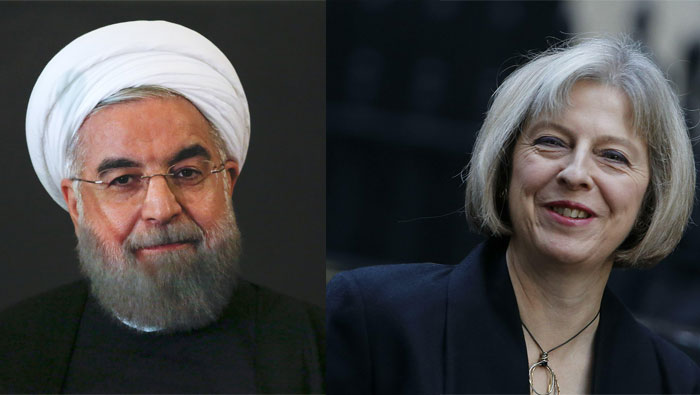 Dubai/London: British Prime Minister Theresa May raised concerns on Tuesday with Iran's President Hassan Rouhani over several cases involving dual British-Iranian nationals, including imprisoned aid worker Nazanin Zaghari-Ratcliffe, her office said.
Zaghari-Ratcliffe, 37, who was detained in early April as she tried to leave Iran after a visit with her two-year-old daughter, is accused of trying to overthrow the Iranian government.
Her husband, Richard Ratcliffe, has dismissed the accusation.
During a telephone call, May, who took office last month after Britain's June 23 vote to leave the European Union, and Rouhani agreed their two countries should seek to advance their relationship.
"The prime minister raised concerns about a number of consular cases involving dual nationals, including that of Mrs Zaghari-Ratcliffe, and stressed the importance of resolving these cases as we worked to strengthen our diplomatic relationship," a spokeswoman for May's office said.
Zaghari-Ratcliffe works for the Thomson Reuters Foundation, a London-based charity that is independent of Thomson Reuters and operates independently of Reuters News.
Several Iranian dual nationals from the United States, Britain, Canada and France have been detained in the past few months and are being kept behind bars on various charges, including espionage or collaborating with a hostile government.
May and Rouhani also spoke about the implementation of the deal made between Iran and foreign powers about its nuclear programme, with May saying Britain would make efforts to enhance banking cooperation with Iran.
Since international sanctions over Iran's nuclear programme were lifted in January, the world's big banks have continued to stay away because they fear being penalised by remaining US sanctions over issues such as money laundering.
May and Rouhani also agreed to work on forming closer ties at various levels, a top Iranian official was quoted as saying by the state news agency IRNA.
The two discussed expanding economic relations, especially in the banking and insurance sectors, and regional cooperation, specifically in the fight against terrorism, Hamid Aboutalebi, Rouhani's deputy chief of staff tweeted, according to IRNA.