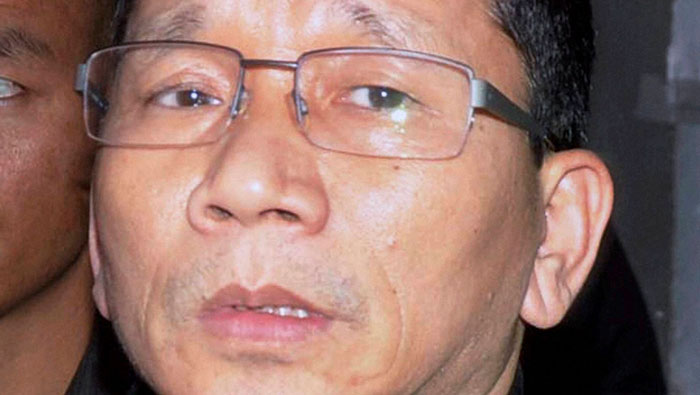 Itanagar: Former Arunachal Pradesh chief minister Kalikho Pul allegedly committed suicide on Tuesday, weeks after the Supreme Court unseated him and restored the Congress government, sparking violent protests in the northeastern state.
Forty-seven-year-old Pul was found dead at the chief minister's official residence which he was yet to vacate, police said, adding that one of his wives found him hanging from the ceiling fan in his bedroom.
According to the doctors, the death occurred between 7 and 7:30am.
Officer-in-Charge of Itanagar Police Station Sora said three to four persons have been injured in incidents of stone pelting during the protests.
The state government declared a three-day state mourning. This was decided at a Cabinet meeting chaired by Chief Minister Pema Khandu.
The Cabinet conveyed its condolences to the family members of Pul.
Talking to reporters, Chief Secretary Shakuntala Doley Gamlin said the body of Pul would be flown to his native village at Hawai in Anjaw district on Wednesday for performing the last rites with full state honours.
"All the official formalities have been completed and the body has been sent for a post mortem. All angles have been minutely observed by the police to ensure that there is no foul play in his death," the chief secretary said. Gamlin declined to comment on the alleged suicide note left by Pul.
Chief Minister Pema Khandu has expressed shock over the sudden and premature demise of his former colleague Kalikho Pul who breathed his last this morning.
In his condolence message to Pul's wife, Khandu wrote, "It pains my heart to write to you at this moment of extreme grief....the news of the sad demise of Pul has come as a shock to me. Pul was a seasoned and veteran leader who served the state in various capacities."
As soon as the news of Pul's death spread, scores of his supporters gheraoed Khandu's bungalow in Niti Bihar area and demanded a probe into Pul's "unnatural" death.
They also set on fire an under-construction building of the deputy chief minister and damaged two official bungalows.
Pul, who is survived by three wives and four children, had not met any outsider for the past seven days, according to his family.
Pul briefly served as the chief minister from February 19 replacing Nabam Tuki and remained in the post till July 13 before the government headed by the Congress rebel was unseated by the apex court.
Starting his career as a carpenter, Pul went on to become a guard and then earned the distinction of being the longest serving finance minister of the state under various chief ministers, including Gegong Apang, Mukut Mithi and late Dorjee Khandu.
Prime Minister Narendra Modi condoled the death of Pul, saying his services to the state will be remembered.
"My thoughts are with the family & supporters of Kalikho Pul on his sad demise. His service to Arunachal Pradesh will be remembered," Modi tweeted.
President Pranab Mukherjee also condoled the death of Pul, saying his passing away is a loss for the state as well as the country. In a message to Pul's wife Dangwimsai, he said he was shocked and distressed to learn about the untimely demise of the leader.
"Words are difficult to give solace at this moment of deep loss to your family and you. Pul symbolised the hopes and aspirations of the youth of Arunachal Pradesh. He made significant contribution towards the welfare of the people of the state. In his death, we have lost a promising young leader who rose from a humble background and worked for the common man," Mukherjee said in the message.
"I pray to the Almighty to give you, and the other members of your family, the strength to bear this irreparable loss," he said.
Minister of State for Home Kiren Rijiju, who hails from Arunachal Pradesh, also expressed his deep condolences to the aggrieved family.
"I am shocked and deeply saddened to know about the sad demise of Pul. I express my deepest condolences on his untimely and tragic demise.
"He was one of the greatest 'Sons of the Soil' from remote area of Arunachal Pradesh and despite hailing from a very humble origin, reached a great height in political career through sheer grit and hard work," Rijiju said in a message from Bali, Indonesia, where he is attending an international meeting on counter terrorism.
Pul's supporters said they would not allow his body to be taken out from his bungalow at ESS sector and demanded that he be buried inside the premises.
A coffin, which was brought from outside, was damaged and set on fire by the crowd before the assembled media.
A section of the supporters headed towards the official residence of Deputy Chief Minister Chowna Mein, less than 100 metres away, damaged the outer wall and at least 10 vehicles parked in the premises.
An under-construction premises of the deputy chief minister was also set on fire, police said, adding there were no casualties.
Protestors also damaged the official bungalow of Industries Minister Tapang Taloh.
A high-level cabinet meeting was convened and police reinforcements, including state police and ITBP, were sent to the high-security VVIP zone where the ministers' residences were located.
Pul's body will be kept at his bungalow to enable the public to pay respects, official sources said.
Pul had led a group of dissident MLAs from Congress against Tuki early this year and was sworn-in as chief minister a few hours after President's Rule was revoked in the state on February 19.
Pul's eldest wife has appealed to the public to maintain calm and not indulge in violence.