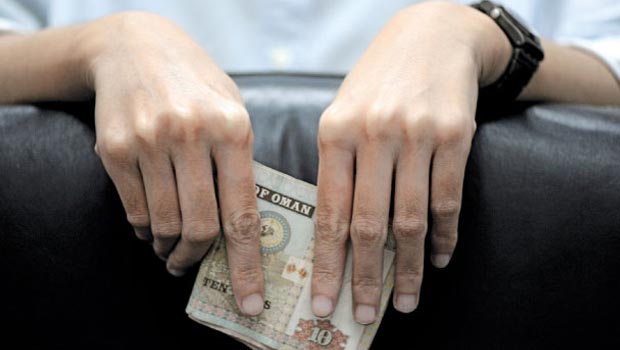 Muscat: A fall in oil prices and the slowing down of gross domestic product (GDP) growth rate in the Gulf countries could lead to an increase in Non-Performing Loans (NPLs) of banks, according to an International Monetary Fund (IMF) working paper.
The working paper entitled, “The impact of oil prices on the banking system in the GCC”has been jointly authored by Padamja Khandelwal, Ken Miyajima, and Andre Santos.
The paper states that data on actual and projected oil price performance for 2015 to 2020 suggests that oil prices will, on average, remain 50 to 60 per cent below the 2014 peak in the medium term.
“Similarly, non-oil GDP growth is assumed to weaken by 3percentage points,” it added.
Oil prices have rebounded vigorously from their trough in early-2016 and are expected to stage a more moderate rally in the next two years.
The WTI spot price fell close to $30 a barrel in February 2016(monthly average data), losing nearly three fourth of its value since June 2014.“However, by mid-May, they have rebounded by more than 50 percent. Pricing of futures contracts suggests that oil prices are expected to recover at a more measured pace, by 5 to 10 percent over the coming two years.”
Strong banking sector soundness provides an important buffer in the GCC (Gulf Cooperation Council) for the oil price decline since mid-2014.
“GCC banks had strong capital and liquidity buffers as of end-2014. Capital buffers and provisioning levels were above those in many other commodity exporting countries. The NPL ratios are low and both loan loss provisions and profits were strong. In fact, provisions fully cover NPLs, on average. Strong macroeconomic performance helped, so did strengthened regulatory frameworks and improved risk management. “However, liquidity conditions have started tightening more recently. While credit growth has remained robust, deposit growth has slowed, largely as governments and government-related entities have withdrawn deposits from the banking system,” added the working paper.
Interbank rates have edged higher since the beginning of the summer of 2015.
The IMF paper also stated that generally, GCC economies can be adversely affected by low oil prices for at least two reasons.
Firstly, the GCC economies are highly dependent on oil and gas exports. During the 2011 to 2014 period, hydrocarbon exports represented about 70 percent of exports of goods and services on average.
“Fiscal dependence on hydrocarbon revenues was even greater, accounting for over 80 percent of total fiscal revenues on average,” noted the working paper. Over the past decade and a half, the dependence on hydrocarbon fiscal revenues did not decline despite efforts at economic diversification.”
Secondly, macro-financial linkages in the GCC can amplify the effects of oil price movements over the financial cycle. Oil price movements and government spending policies create feedback loops between asset prices and credit that can lead to the build-up of systemic vulnerabilities in the financial sector.
Oil price upturns lead to higher oil revenues, and stronger fiscal and external positions. Equity market returns are larger as investors anticipate the impact of higher oil prices on the corporate sector, and generally stronger government spending growth. In turn, stronger government spending leads to higher non-oil output growth, greater banking sector liquidity and credit growth, higher real-estate prices, and stronger bank balance sheets, the paper concluded.