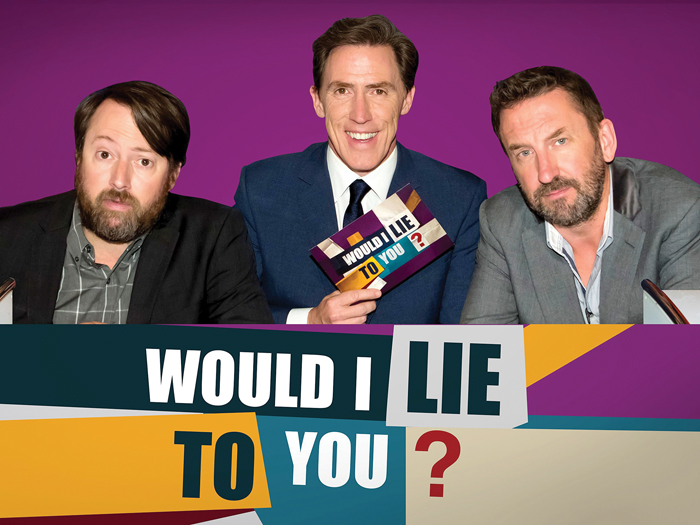 “I was once evicted from a town for sleeping too loudly.”
This might sound like the sort of ridiculous lie you tell to your friends in order to get a laugh from them, but that, and many other odd statements are the foundations of one of what has to be the funniest TV shows on air right now.
Now running in its 12th year, the award-winning comedy show Would I Lie to You? features some of the best British humour, wit and banter to be seen, and is surely a must-watch for comedy lovers throughout the world.
The premise of the show is actually rather simple. Featuring two teams, each with three comedians on them, they are presented with a series of odd-sounding statements, such as ‘I once booked a holiday to Costa Rica because I thought it was in Spain, and only realised my mistake when I sat down on the plane’ or ‘I was once arrested for not knowing I had illegally entered a country’, which while they may sound weird, may not sound all that weird. And therein lies the conundrum...we might be quick to dismiss these tall tales as lies, but are they really lies?
While one team makes up these crazy stories, it is the job of the other to guess if they are indeed correct, and there lies the hilarity and madness that has made Would I Lie to You? such a popular show. Plenty of famous names have been on the show in the past: Lee Mack and David Mitchell, both reputed comedians in their own right, captain the teams, while Rob Brydon and his predecessor Angus Deayton do a great job of hosting the show with typical British intelligence and dry humour.
In the past, comedians such as Chris Addison, Richard Osman, Rhod Gilbert, Sara Pascoe, Katherine Ryan, Michael Macintyre, Hugh Dennis and Dara O’Briain have all been on the show. A number of other personalities, including radio presenter Claudia Winkleman and actor Charles Dance – you know, the chap who played Tywin Lannister on Game of Thrones – have also been on the show.
Originally created for the BBC, Would I Lie to You? is available to watch and download for comedy show lovers the world over.
Although the show had been previously nominated for a BAFTA award, which are awarded by the British Academy of Film and Television Arts, over the past five or six years, it finally did get a BAFTA to its name when Lee Mack won the award for Entertainment Performance for Would I Lie to You? thereby cementing its role as a truly memorable comedy show.
“We do come every year for the last five years and we keep losing it as a show,” said Lee Mack after winning his BAFTA. “I was already doing the ‘well it was nice just to be nominated’ smile. I have had many years of practice at it, and then I went, ‘oh, it’s me, I’d better think of something to say’.
He is not the only person on the show to have won a BAFTA though. His co-captain David Mitchell has one as well. “I think I am pretty sure he’s got BAFTAs,” said Mack. “It was nice, but it was a group effort and all that. We are always fascinated by the fact that we can just turn up and play a parlour game. It’s amazing. It’s the best fun in the world, it really is. We don’t have to do any writing, we just turn up and sit there and have a laugh and have great guests on, yeah, it’s just fun.
“Genuinely, it is about the three of us, and this goes to Rob and David as well and all the production team.”– [email protected]

The Short and Skinny
Name: Would I Lie to You?
Genre: Comedy panel show
Produced by: Zeppotron
Produced for: BBC
What it’s about: In this British comedy game panel show, comedians are presented a load of tall tales and asked to discern whether they are ridiculous truths or bold lies. A hilarious must-watch for you at any time of the day.
Number of Episodes: 94 (across 12 series)
Runtime: 30 minutes
Where to watch: BBC iPlayer,
Amazon Prime, various streaming sites
IMDB Rating: 8/10