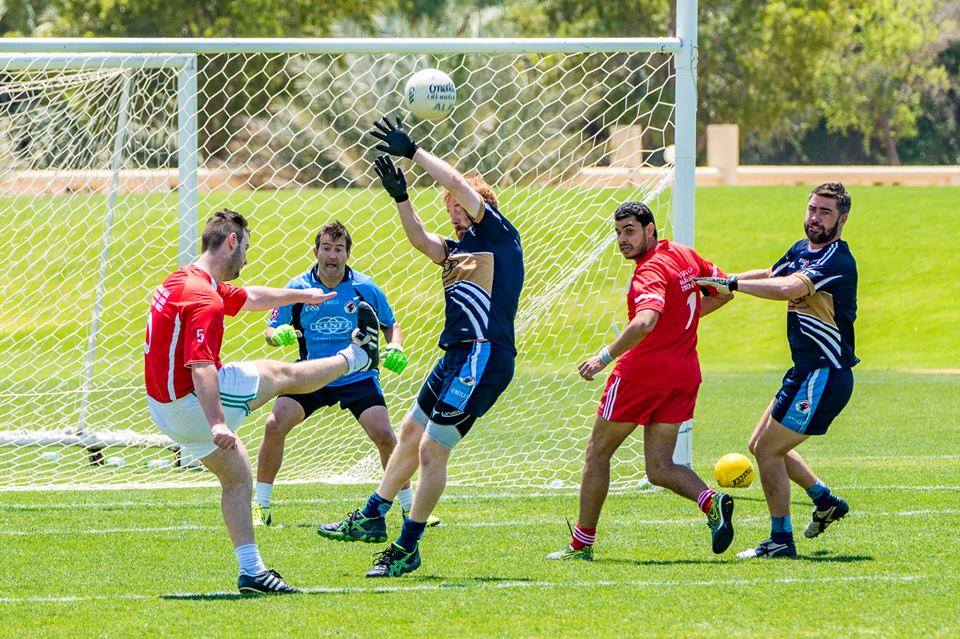 I was at the Sultan Qaboos Sports Complex to catch a glimpse of a sport that I couldn’t even spell properly. I loved playing games in school, but was never exceptionally good at any in particular. Hence I only have a vague idea about the rules of play for most sports, but I knew enough to see that the game taking place on the field in front of me that day was strange. Girls and guys used their hands, legs, and bodies to move the ball down the pitch, yet the referee didn’t blow his whistle.

Though new to me, Gaelic games have existed for centuries. The four most popular Gaelic sports still played today in Ireland are handball, rounders, hurling (camogie for girls), and Gaelic football.

Gaelic handball is a sport similar to American handball or squash, while rounders involves hitting a small ball with a round-ended stick. Hurling is a slightly more aggressive game played with sticks and a ball called sliotar and is said to have originated with legend of Cork Collin who, upon engaging in a fight with his enemy, came face to face with his enemy’s dog. Apparently, the man used hurling techniques to get past the dog, and his strategic moves morphed into a sport. The most popular of the games, the one which I was watching at the Sports Complex, was Gaelic football, a sport with an interesting history all it’s own.

In the days before TV or other modern forms of entertainment, people in Ireland were desperately looking for recreational activities to keep themselves busy. In pursuit of a hobby, they started using a hog’s bladder and kicking and throwing it around. Slowly, but steadily this kick-the-bladder game evolved and by the late 19th century, an organised sport that was played and followed throughout Ireland had developed.

The official association for Gaelic games was founded in 1884 in a hotel called Hayes in Tipperary, Ireland, and soon there after, every village, town, and parish in Ireland had a Gaelic football team.

Gaelic football is a sport played by both men and women (separately). It’s a cross between football, basketball, and rugby and is a physically challenging sport that requires immense amounts of mental and physical strength and discipline. To this day, whenever there is a Gaelic match in Ireland, the national stadium is always packed, with an average of 85,000 spectators filling the stands. The finals and semi-finals are also watched from home by at least 5 million viewers.

In 2012, the Oman GAA was founded in Muscat by Steph McQuaid with the support of the Middle East county board. Steph had been living in Oman for a few years, and after gaging the interest, she learned that many of her Omani friends were interested in taking up her home-town sport. Since they were all newbies, she didn’t want them to be intimidated by the aggressive, experienced players that were already participating in organised matches in the region, so she founded Oman GAA to provide a welcoming environment for all the sports aspirants, irrespective of their nationality or background, to learn the sport.

Many of the current players have a background in football and basketball, and were totally unaware of the Gaelic game before joining. And though games are still held for beginners, the Oman Gaelic Football team is becoming a force to be reckoned with.

The first Gaelic Football World Games was held last year in Abu Dhabi, in which Oman participated, and this year, the second World Games will be held in the motherland of Gaelic games, at Croke Park in Ireland, a dream for these competitors.

The Oman team is being trained in fitness, strategy, and technique by Irish coach, Mark. Incredibly, the players, who were all from different countries, including Palestine, Jordan, Pakistan, Sudan, Morocco, Korea, Syria and of course, Oman, were shouting things to one another in their own languages, everyone completely understood each other and followed without a hint of miscommunication. Even during the warm-ups the counts were given in a different languages each round. Even from the sidelines, I could feel their camaraderie. They felt like a tight team, like a family.

I managed to speak to one of the most experienced Omani players on the team, Salim Al Habsi, whose eyes never left the field throughout our little chat, despite the fact that it was at 11pm, and he had just finish a strenuous training and practice match.

“I randomly joined the team four years back. I thought it was a weird sport at first,” he laughed. Now this former traditional footballer feels this game and this team are his driving forces. “I had the chance to play with my team in the world games last year, which was an incredible experience.”

Rules of the Game
Gaelic football is a game that is played in a pitch that is slightly bigger than a soccer field with a ball that is smaller than a soccer ball. Players in the game are allowed to carry the ball in their hands, kick it, or hand-pass it. He or she must bounce or solo the ball after every four steps. In a ‘solo’ the player has to drop the ball onto his or her foot and kick it back to the hand. Though the game may allow for a little physical contact, it is not as aggressive as rugby. Shoulder-to-shoulder contact is permitted while slapping the ball out of an opponent’s hand. However, players cannot punch, trip, pull, or cause any physical damage to the opponent on purpose.
Gaelic football has a slightly different scoring system. Honestly, it did remind me a little of Quidditch. A goal is scored when the ball crosses the goal line between the posts and under the crossbar, while a point is scored when the ball goes over the crossbar. A goal is the equivalent of three points.