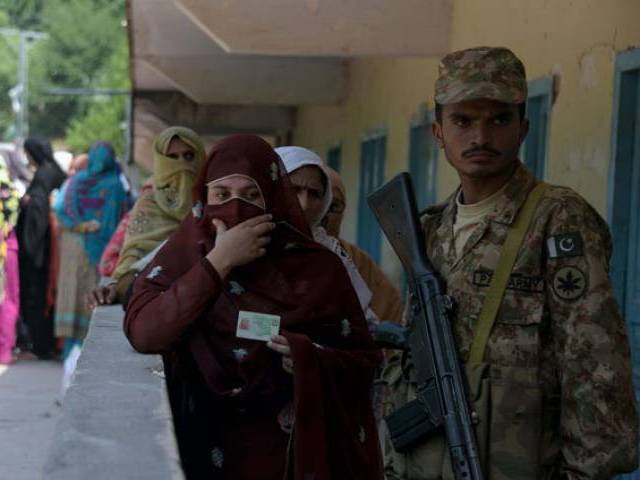 If there’s one corollary that can be drawn from the Azad Jammu & Kashmir (AJK) Legislative Assembly elections held recently, it is that Project Democracy is not only alive, but kicking.
Some 2.6 million votes were cast in a largely peaceful milieu, auguring well for participatory politics.
The elections came at a particularly testing time given the prevailing situation in neighbouring Indian-administered Kashmir, leading to much cynicism about how the voters would react. In no small measure, this pessimism was accentuated by the divisive nature of political campaigning. The turnout was reportedly below par at 40-50 per cent in most constituencies, but still vigorous in form.
The two old war horses, Pakistan People’s Party (PPP), which was also the ruling party going into the vote, and Pakistan Muslim League-Nawaz (PML-N), ran an acrimonious campaign and they were not left behind by the firebrand opposition Pakistan Tehrik-i-Insaf (PTI) taking a first real shot at attracting the popular vote since gaining traction in the 2013 general elections.
However, despite the usual white noise, Prime Minister Nawaz Sharif’s PML-N not only won, but did it in grand style, stunning pre-poll predictions of a split mandate giving way to a coalition arrangement. The PML-N grabbed 31 of the 41 seats on offer, leaving both the PPP (three seats) and PTI (two seats) licking their wounds; moreso the former, since it had fielded a newer face to make a resonant pitch!
The results have thrown up questions aplenty for the old ruling party (PPP) as well as the aspiring new one (PTI), but before that some significant observations are in order. First and foremost, even though the PML-N won spectacularly, its victory follows a now familiar pattern that sees the party in power at the Centre (Islamabad) clinching the honours in Pakistan-administered Kashmir as well.
The simple explanation for this is that the voters follow the aforementioned trajectory because they feel their best bet in getting their base local level issues resolved effectively lies in electing people from the same ruling party at the Centre since those elected are reckoned to exercise control and have easier access to funds.
However, the sweeping curve has made its presence felt because of the situation the PML-N found itself going to the hustings. The prime minister was away from the country for more than one-and-a-half months for health reasons during which time, he had an open-heart surgery in London as well.
For more than three months, Sharif has also faced the brunt of a belligerent opposition since three of his children were named in the Panama Papers for having off-shore accounts and being the beneficiaries of properties abroad allegedly bought from this wealth. With both the PPP and the PTI — the latter has already announced a public campaign beginning early this month to force Sharif to face accountability — taking that ammo to their respective campaigns, doubts began to surface if Sharif would regain his mojo in Pakistan-administered Kashmir.
The PPP dispensed with the tried and failed methods of the recent past to pitchfork Bilawal Bhutto, the young scion of the grand old party and its chairperson, to infuse a youthful zest to its campaign. However, in the end, his amateurish rhetoric which saw him give Sharif unflattering names and the failure of the ruling PPP in Pakistan-administered Kashmir to deliver combined to put the party out to pasture.
The resort to the unflattering Sharif analogy appeared to undercut the 27-year-old Bilawal’s own stature, and seemed the kind of populist sloganeering associated with the far right, not secularist PPP. It was rejected quite decisively.
The PTI was also cast away in inglorious fashion — making light of its much hyped “Naya Pakistan” (New Pakistan) mantra. In fact, the humiliating defeat its regional chief, Barrister Sultan Mehmood, the supposedly powerful former Pakistan-administered Kashmir prime minister (when he was with the PPP), suffered was a sobering enough lesson for PTI chairman Imran Khan to tweet a somewhat surprising message of felicitation to the arch rival PML-N on winning the election.
Perhaps, that was the only ‘saving grace’ which made PTI look less embarrassing than the PPP, which invited ridicule by blaming the results on rigging — that familiar refrain of losing candidates and parties in Pakistan.
Since then, Mehmood has also deemed it fit to hide behind the bogey of ‘poll fraud’ to explain his Waterloo, but Bilawal seems to have chastened since famously warning Sharif of a more telling street agitation than the one instigated by Imran Khan in the fall of 2014.
But it goes without saying that both the PPP and PTI have their tasks cut out to revive their political fortunes before the 2018 general elections.
As for the PML-N, the triumph should reinvigorate the resolve to get down to business and reward the people in Pakistan-administered Kashmir for standing by them against all odds.
The writer is a senior journalist based in Islamabad