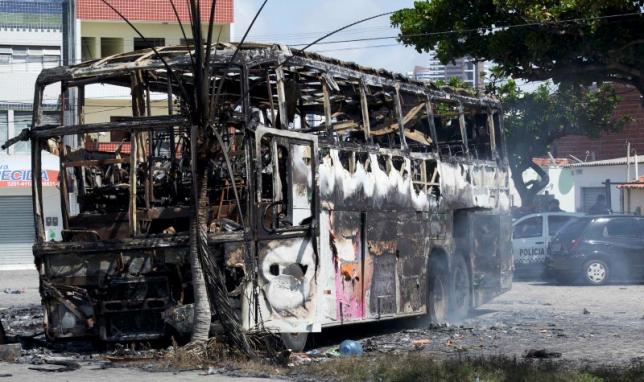 Natal: Inmates temporarily took control of a state prison and set fire to mattresses on Wednesday in Brazil's northeastern state of Rio Grande do Norte where gangsters have unleashed a wave of violence against the government.
Troops began street patrols in the state capital of Natal on Wednesday night to prevent the torching of more government vehicles just days before the Olympic Games open in Rio de Janeiro, 1,550 miles (2,500 kilometers) to the south.
Security officials said special forces police entered the prison and retook control, extinguishing the fires.
They said the revolt at the Parnamirim penitentiary outside Natal was the latest attempt by a criminal gang to reverse a government move to block cell phone signals used by the gangsters to run their business from jail.
The fires were lit below the signal blockers but their flames did not damage the equipment, said a spokesman for the state's security department, Captain Christiano Couceiro.
Brazil's federal government has sent 1,000 army soldiers and 200 Marines to help quell the violence. Troops began to patrol major thoroughfares and public squares of Natal, Couceiro said.
The streets and shops of the city were almost empty at night as residents feared to go out and buses stopped running early.
State Governor Robinson Faria called the wave of violence and attempt to intimidate the authorities. He told reporters his government will not give up its efforts to stop organized crime operating from prison cells.
Police have arrested 86 people suspected of destroying 29 buses and other state vehicles with fire, setting off bombs and shooting at government buildings.
Brazil's interim President Michel Temer, seeking to end the violence before the Olympic Games start on Friday in Rio, authorized the dispatch of troops to the state on Sunday. No Olympic events are taking place in Rio Grande do Norte.