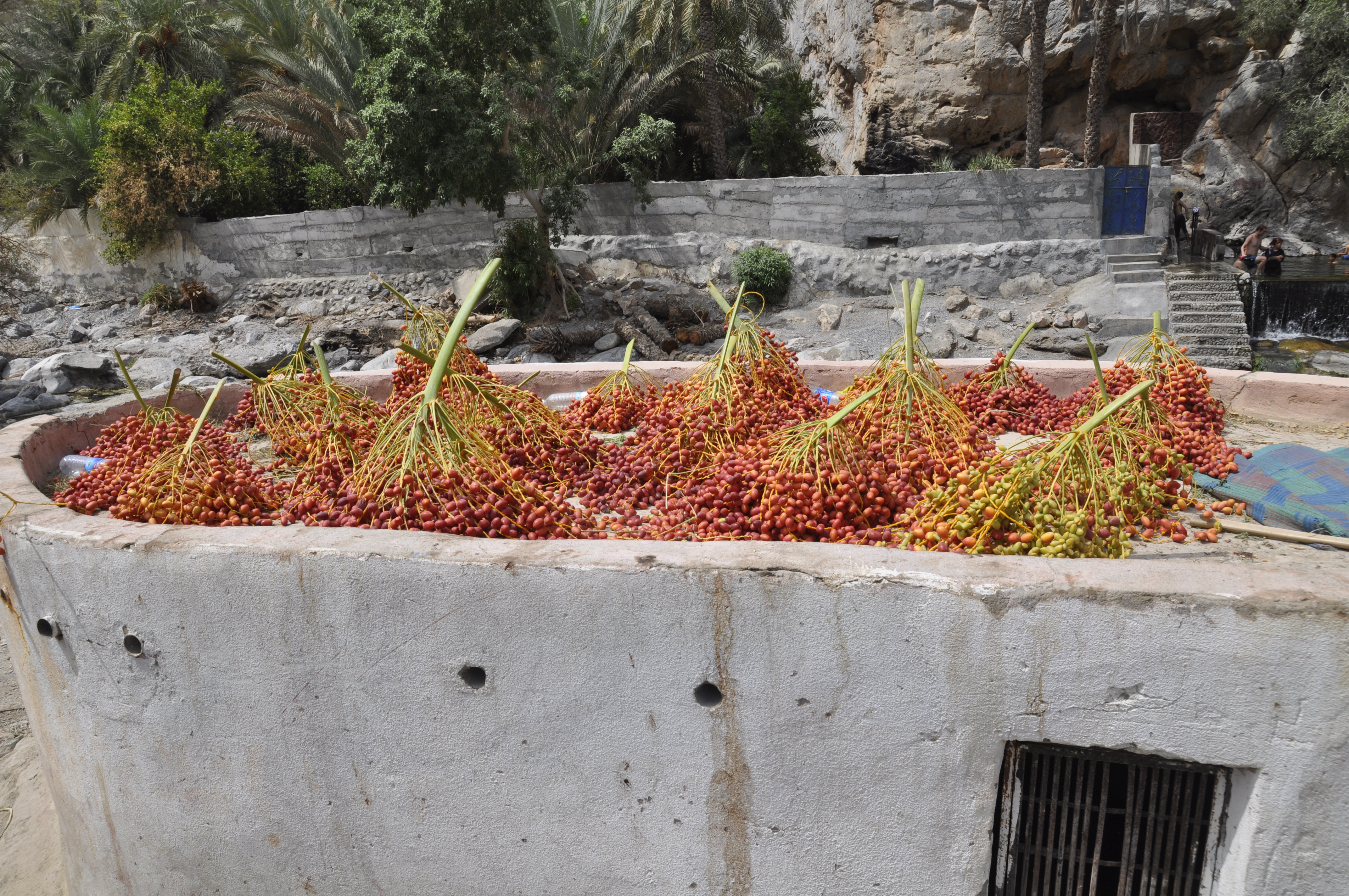 Dates are synonymous with the Middle Eastern life as we know that there are few more appealing ways to round off a meal in the Sultanate than eating a handful of sweets and succulent dates. These tasty fruits have been a key part of the diet in the Middle East for thousands of years, and their popularity shows no sign of waning even in the modern era.
In many parts of Oman the locals still plant the shoot of a date palm as a tradition on the occasion of the birth of a son. The child’s personal tree grows with him. It is said that the lifespan of a date palm is about that of a human and this personal tree is a guarantee against starvation. The tree is so rooted in tradition and the Middle Eastern life.
It is the time of the year here again that the golden fruit garland Sultanate’s palm fields across many governorates. For the past many days several of these green fields have been witnessing the harvesting of dates with much traditional fervour. Dates harvest (Suh) or as locally known as ‘Jidad’ of Date Palms is a social event participated by all members of the family. They separate good quality dates and store it for consumption, for gifting or selling in the local markets and export to foreign markets. The damaged and low quality dates are given as food for the livestock.
**media[466670]**
In each region of the country the harvesting and the associated procurement of the priced fruit have traditional variations. In North Al Sharqiyah Governorate, South Al Batinah and South Al Sharqiyah Governorates it is ‘Tabseel’ season of ‘Al Mabsali’ and other varieties of dates, which is an economic event rooted in social tradition.
According to local farmers, the ‘Tabseel’ season is the harvesting and procurement of ‘Al Mabsali’, a type of date palm. This variety of date is yellow in colour and is cooked before it ripens fully, thus calling it ‘Busur’. ‘Busur’ is big in size and grown in these parts of Oman. Many of the farmers who grow ‘Busur’ dates in Bidiyah wilayat say that in olden days ‘Tabseel’ was celebrated like Eid celebrations.
Not only the local produce, dates from neighbouring countries also fill the market leading to fluctuating prices. This season, the prices were hugely varying - ranging from OMR16 per kg for Ajwa variety from Medina in Saudi Arabia to the 600 baisa for local varieties. “At the start of harvest season in May, the same dates selling today at 600-900 baisa per kilo were priced at OMR4-6.500. The prices also keep fluctuating by day according to demand. If the demand grows high, the prices go even higher. Sometimes when the supply is good, the prices go low,” said a vendor at the Mawaleh vegetable market.
In Omani dates, Al Khalas is believed to be of the highest quality, according to experts. With 75% of the cultivated land dedicated to date farming, the fruit is produced almost in parts of the country, with Nizwa and Suwaiq being the focal centres along-with the various wilayats of the Sharqiyah regions.
**media[466671]**
In the Sultanate, the farmers grow more than 250 indigenous varieties of dates, of which, the most relished for their succulence and taste are Khalas, Khunaizi, and Fargh.
In the northern part of the country, the centre of date harvest is Fanja souq. Since the beginning of the harvest season, the market becomes flooded with the farm fresh dates, brought by the truckload from Sumail, Bidbid, Dima wa’ Tayeen, Ibra, Samad A’Shan, and Al Rowdha.
The Ash Patash and Al Nagal varieties are the first to hit the market, but it is said that these varieties are not as sweet as the ones that arrive at the markets after that. As the season progressed, dates of the Al Khunaizi variety, described as the most sugary in taste, and Al Khalas also entered the market—followed by Al Mebselli and Al Khasab varieties.
However, farmers say that some quantities of dates, especially Al Khalas and Al Khunaizi, were left on the tree to naturally ripen, thus allowing the fruit to acquire its full taste and flavour. “These are harvested in big quantity during the second stage, known as Al Tamer. The Al Tamer harvest generally represents dates of guaranteed taste, flavour, and quality. The annual yield of a single tree may reach 270kg, with each cluster of dates weighing up to 12kg,” said Rashid, an exporter in Fanja.
Storing is also easy, as they are dry fruits and hassle free to store. Fresh dates could be kept in refrigerator in an airtight container for up to six months. The dried ones have a shelf life of up to one year. “Freezing is also a storage option that allows for an even longer lifespan when kept in an airtight plastic bag or container. However, the traditional Omani method of preserving the dates in clay pots could enable a shelf life of many years,” revealed Rashid.
—[email protected]