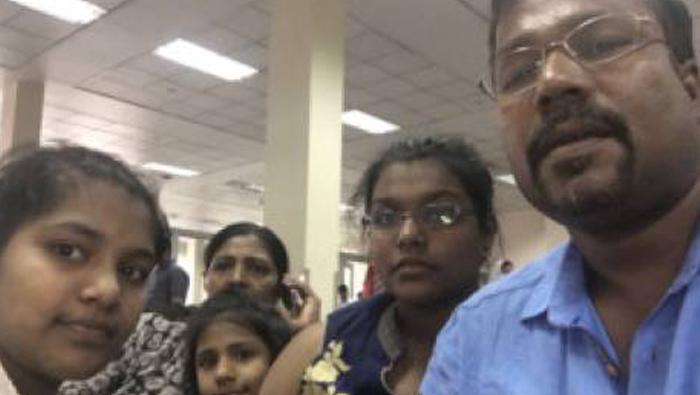 Muscat: "After disembarking from the aircraft through the exit, we heard the first explosion, and then we heard the second and third. By then the aircraft was fully on fire.”
These were the words of Shaji Kochukutty, a medical consultant in Dubai, who escaped Flight EK521 along with his three daughters and wife after the Emirates flight they were on crash-landed at Dubai International Airport earlier today.
The flight was from Trivandrum, India, and had 282 passengers and 18 crew on board.
Shaji and in his family were sitting in economy class in seats 43 A, B, C, D and E. They were returning to their Dubai home after an annual leave trip to India. “I didn’t hear any announcements from the pilot that they were making an emergency landing. Some said that they heard an announcement. However, we felt that it was not a proper landing. Soon after the landing, we saw smoke inside the flight. By then everyone was panicked and somebody had opened the emergency exit door,”
Shaji, who suffered some minor bruises on his leg while leaving through the emergency door – minus his shoes – added: “My girls, 15, 11 and 8, are safe. My wife has suffered a minor strain on her leg. We have reached home safely,” Shaji added.
According to Shaji, the two minutes after disembarking were crucial.
“If the blast had happened while we were inside, what would have happened? Additionally, we were also taken to a safe distance by the rescue team. A big thumbs-up for them. Dubai Airport rescue team’s promptness saved us all,” Shaji added.
The crashed aircraft was a Boeing 777 that has been in service since 2003, according to Flight Radar 24.
On Tuesday it flew from Dubai to Tunisia, Tunisia to Malta, Malta back to Dubai.
On Wednesday morning it made an early flight from Dubai to Thiruvananthapuram on India's southern tip. It was returning back to Dubai from India when it crashed.