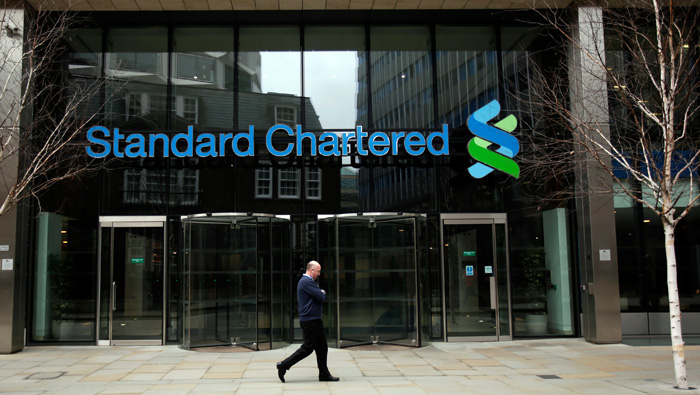 London: Standard Chartered reported a 46 per cent drop in first-half profit as falling revenue outstripped cost cuts amid turbulent markets and slowing growth in emerging economies.
Adjusted pretax profit was $994 million in the first half compared to $1.8 billion a year earlier, the London-based lender said in a filing Wednesday. That fell short of the $1.12 billion average estimate of five analysts surveyed. Adjusted revenue fell 20 perc ent to $6.81 billion.
Chief executive officer Bill Winters, 54, in his first year in the job raised capital, suspended the dividend, and laid out plans for cutting 15,000 jobs and restructuring or divesting $100 billion of risky assets. A sharp drop in revenue and surging loan impairments drove the Asia-focused lender to its first annual loss since 1989 last year. Jose Vinals, an International Monetary Fund executive, was named the bank’s new chairman last week, adding to Winters’s rebuilt management team.
“Although our performance has substantially improved, income growth remains muted and returns are weak,” Winters said in the statement. “The progress we have made has been hard won, and has been achieved against a backdrop of deteriorating external conditions. Interest rate expectations are lower for longer than previously predicted, growth in our markets is slow and global trade volumes are down.”
The bank trades at about half its book value after the stock plunged 39 per cent in 2015. The shares have climbed 4.6 per cent this year before today, avoiding the plunges many other UK-based banks have faced after the nation’s vote to leave the European Union.
Winters has been shrinking the balance sheet and tightening lending standards after his predecessor Peter Sands was replaced last June after eight years at the helm. The CEO has also hired several senior executives and cracked down on ethics within the bank after discovering some employees were acting “ above the law.”
HSBC Holdings, the other UK bank that gets most of its profit in Asia, said pretax profit fell 45 per cent to $3.61 billion in the second quarter from a year ago.