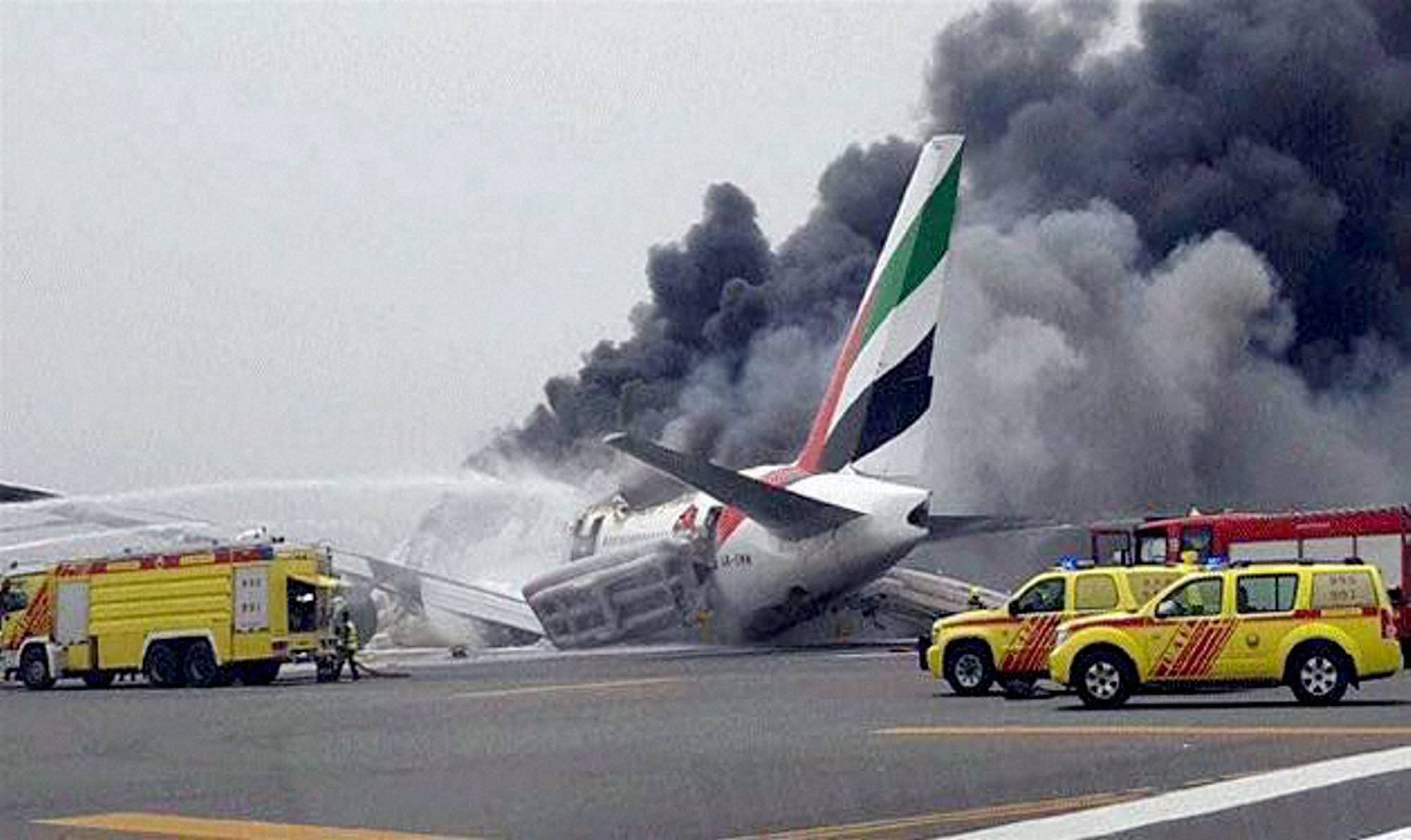 Muscat: A dramatic crash landing at Dubai International Airport ended with an Emirates jet engulfed in a fireball moments after 300 passengers and crew had safely evacuated.
A firefighter died tackling the flaming plane on the ground at Dubai International Airport yesterday and passengers travelling on Oman Air flights – among many other scheduled routes – were stuck in limbo for hours.
VIDEO: Emirates passengers flee burning plane
Several Oman flights were cancelled and re-routed and the delays are expected to have a knock-on effect on travel today.
Flights from Muscat to Dubai and via Salalah were delayed or cancelled.
At 12:50pm Emirates EK521 Trivandrum (India)-Dubai made a crash landing in Dubai and burst into flames.
There were 282 passengers and 18 crew on board and, miraculously, nobody was seriously injured in the incident.
One lucky passenger, travelling with his wife and three daughters, fled the aircraft barefoot and with only a minor leg injury.
The Dubai Media office, quoting the General Civil Aviation Authority, tweeted at around 7:25pm that a firefighter lost his life battling the blazing plane while saving the lives of others.
Following the incident the runway was closed and operations were only resumed at 6:30pm.
28 flights
According to an update from Emirates, the airline had to cancel 28 flights to different destinations. Several were returned to their departure airport and 22 were diverted to other airports in the region on Wednesday.
Soon after the incident, Oman Airport Management Company (OAMC) tweeted that all flights from Muscat via Muscat and Salalah airports to Dubai would be delayed because of the closure of Dubai International Airport.
Transferred passengers
In another tweet, the OAMC reported that all services and facilities in Muscat Airport were ready to host all transferred passengers from Dubai Airport.
Meanwhile, Emirates tweeted that they were doing everything they could to help passengers re-book flights.
“Emirates commercial passengers and Skywards members who had purchased tickets on or before August 3 will have rebooking; re-issue; and cancellation charges waived,” the airline tweeted.
At around 3pm, Oman Air tweeted that Flights WY609/610 MCT-DXB-MCT were cancelled due to the incident at Dubai International Airport.
Talking exclusively with Times of Oman, survivor Shaji Kochukutty, a medical consultant in Dubai, said that Dubai Airport’s rescue team’s prompt actions saved them all. “After disembarking from the aircraft through the exit, we heard the first explosion, and then we heard the second and third. By then the aircraft was fully on fire,” Shaji said.
Read here: Plane was fully on fire, says survivor
“I didn’t hear any announcements from the pilot that they were making an emergency landing. Some said that they heard an announcement. However, we felt that it was not a proper landing. Soon after the landing, we saw smoke inside the flight. By then everyone was panicked and somebody had opened the emergency exit door,” he added.
Shaji, who suffered some minor bruises on his leg while leaving through the emergency door – minus his shoes – added: “My girls, 15, 11 and 8, are safe. My wife has suffered a minor strain on her leg. We have reached home safely,” he said.
According to Shaji, the two minutes after disembarking were crucial.
Blast
“If the blast had happened while we were inside, what would have happened? Additionally, we were also taken to a safe distance by the rescue team. A big thumbs-up for them. Dubai Airport’s rescue team’s promptness saved us all,” Shaji added.
The crashed aircraft was a Boeing 777 that has been in service since 2003, according to Flight Radar 24.
On Tuesday it flew from Dubai to Tunisia, Tunisia to Malta, Malta back to Dubai. On Wednesday morning it made an early flight from Dubai to Thiruvananthapuram on India’s southern tip. It was returning back to Dubai from India when it crashed.