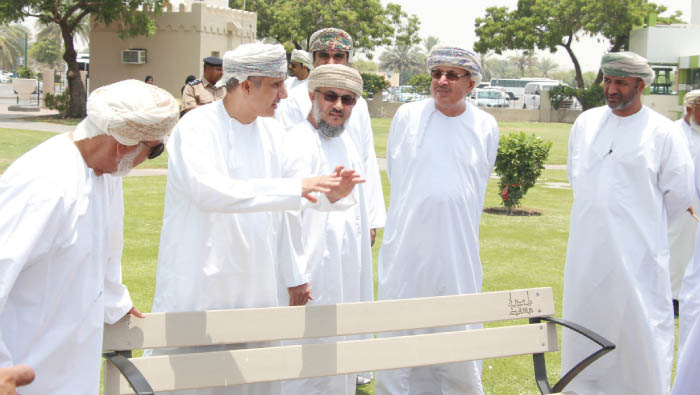 Muscat: Muscat Municipality is considering creating a new park and establishing a dual carriageway in Wilayat Seeb following improvement suggestions from the public.
Mohsen bin Mohammed Al Shaikh, Chairman of the Municipal Council of Muscat Governorate, visited various sites in Wilayat Seeb to determine the needs of citizens in terms of development projects, services within the wilayat and entertainment facilities.
The visit comes as a follow-up to the programme adopted in the 2019 Business Plan which aims to identify suggestions and observations received from citizens through the various contacts with the Council, in order to ease the process of finding solutions.
Accompanying Al Shaikh during the visit was Sheikh Ibrahim bin Yahya Al Rawahi, Wali of Wilayat Seeb, a number of Municipal Council members, and officials from Muscat Municipality.
The visit included sites chosen after suggestions by citizens and began in Seeb market in order to look at issues regarding the development and upgrade of various areas including the entrance and exit and the sewage system.
Al Shaikh also listened to the comments and opinions of the national vendors in the market.
Included in the visit were a number of areas such as Al Mouj roundabout, various wadi areas, internal and entry roads in Mabaila and the green areas in front of Al-Bahja Centre.
In addition to these, other sites where several suggestions were received included the development of the Sahwa park, Seeb Park, the proposal to establish a park after the mosque of Fatima and creating a dual-lane road from Al Izdihar roundabout to Al Mouj Roundabout.
A video presentation was made as part of the visit which included a review of a number of proposals and initiatives, as well as discussing observations made during the field visit. Among the initiatives that were reviewed in the visual presentation was the ‘Tayeb Athrak Awareness Program’, Al Shaikh praised the positive impact of such initiatives on individuals and society