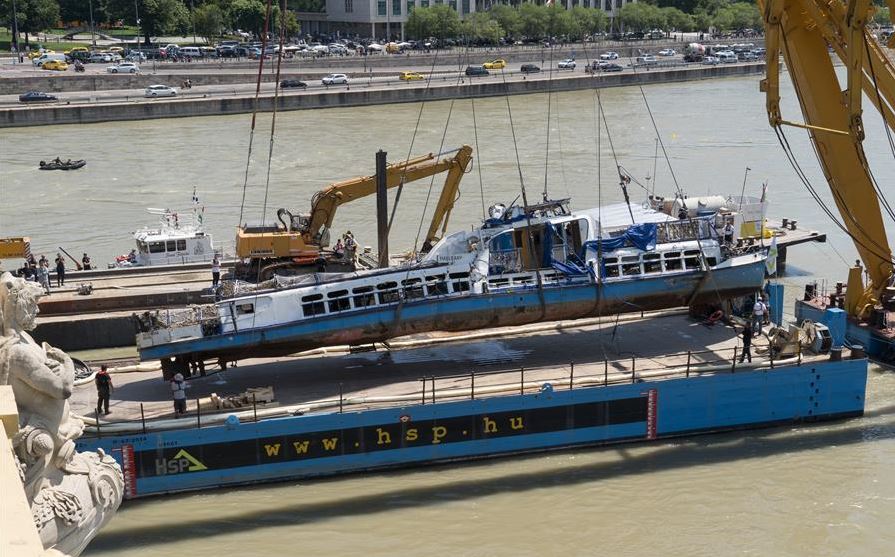 Budapest: Hungarian authorities raised a tourist boat that sank on May 29 to the surface and found four more bodies trapped inside the wreck.

"Four victims were trapped inside the wreck and have been removed from the vessel. Among them are the only child of the accident and the Hungarian captain of the boat," Police spokesman Kristof Gal told at a press conference following the hoisting of the ship.

The bodies raise the death toll from the incident to 24 people, with four still missing and only seven survivors.

"Hungarian authorities will double their efforts in order to find the remaining four bodies," Kristof underlined.

He also said that the wreck would be transported to a port in southern Budapest, where it would be inspected rigorously with the help of experts.

Authorities did not exclude the possibility of finding more bodies in the wreck, since some parts of the boat were inaccessible to rescue teams.

The ship, known as the Mermaid, sank after a Viking Sigyn cruise ship collided with it on May 29 as both vessels passed under Margit Bridge in central Budapest. It had a group of 33 South Korean tourist passengers and a crew of two Hungarians onboard at the time.

The operation to bring the Mermaid to the surface took several hours and was streamed live by local media.

Authorities stated that recovery efforts were consistently hampered by the Danube's high level of water.

At the time of the accident, South Korea's President Moon Jae-in held an emergency meeting with ministers and officials and called on them to use all available means to support rescue and support operations.

The ship was on its way back after a one-hour riverside tour, when it was struck. The tourists were on a six-nation package tour to Eastern Europe.

Sightseeing at night along the Danube River is a popular tourist activity in the ex-Soviet Republic due to its scenic views of the city's most popular landmarks including the Gothic-style parliament building and the historic Buda Castle.