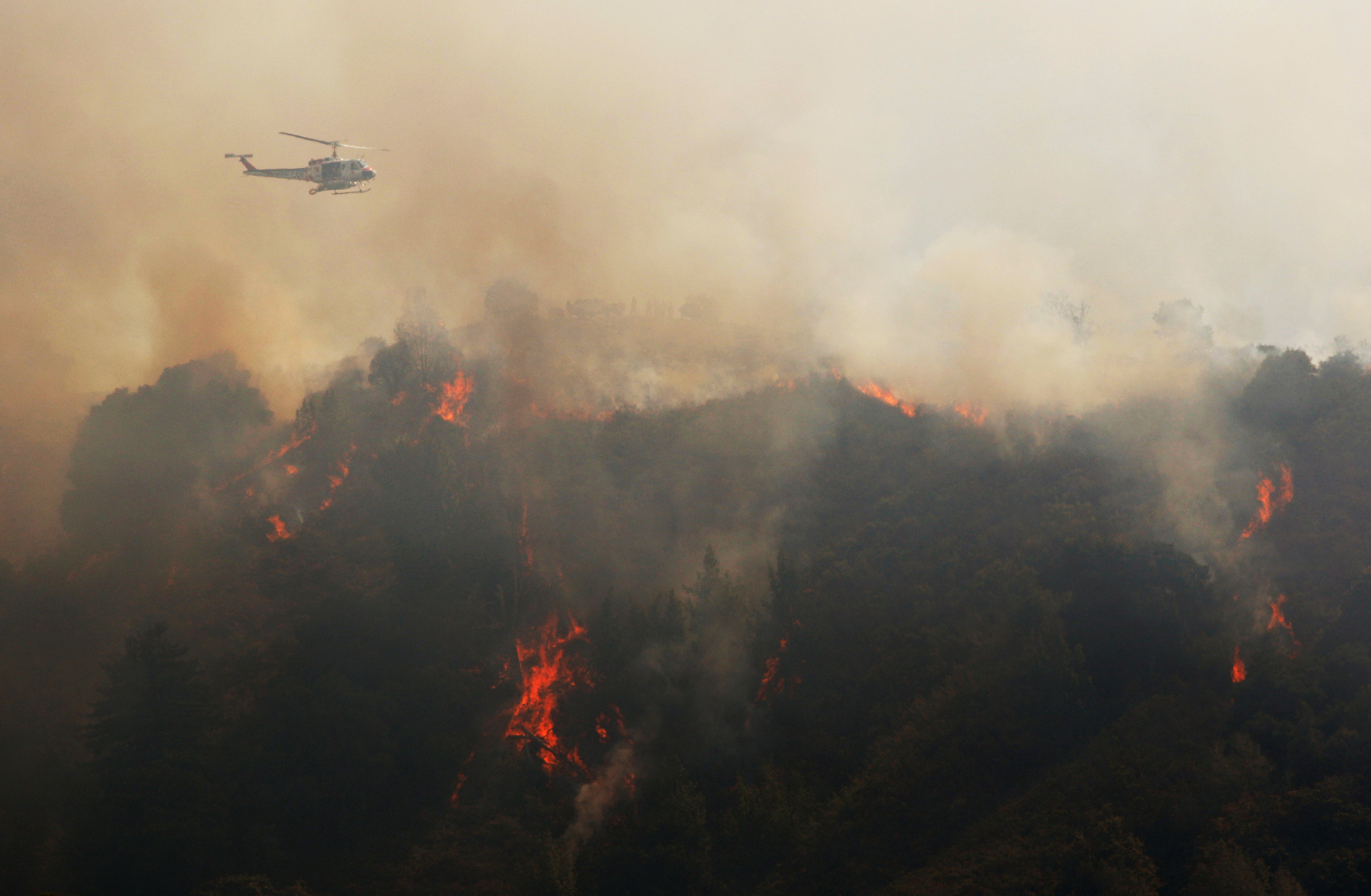 Calfironia: The property toll claimed by a deadly blaze near California's Big Sur coast has grown as the fire threatened hundreds of more homes and forced several state parks to close at the height of summer tourist season.
The so-called Soberanes Fire, burning just south of the oceanside town of Carmel-by-the-Sea, has destroyed 57 homes and 11 outbuildings, with at least five other structures damaged by fire, officials said Friday evening.
On Thursday, the count was 41 homes and 10 outbuildings. Firefighters have managed to save a number of large homes in the hills above the Carmel Highlands community.
The blaze, which started last Friday, has roared through nearly 32,000 acres (13,000 hectares) of drought-parched chaparral, grass and timber into the Los Padres National Forest. Containment stood at 15 percent on Friday, up from 10 percent during the previous few days, even as the overall size of the fire zone expanded slightly, leaving 2,000 structures threatened and about 350 people under evacuation orders.
Mountainous terrain combined with extremely hot, dry weather conditions have hampered efforts by nearly 4,300 firefighters to hack buffer lines through dense vegetation around the perimeter of the blaze, officials said. Fire managers hope steady reinforcements to their ground crews over the past few days will help make a difference, said Robert Fish, a battalion chief with the California Department of Forestry and Fire Protection (Cal Fire).
"The key here is high temperatures, rugged, steep terrain - a very difficult firefight," Fish said. Much of the effort is focused on halting the advance of flames in the direction of Big Sur communities, he said.
The fire threat has prompted authorities to close a string of popular California campgrounds and recreation areas along the northern end of the Big Sur coastline, including Julia Pfeiffer Burns State Park and Point Lobos Natural Reserve. Highway 1, the scenic route that winds along seaside cliffs overlooking the Pacific, remained open, though motorists were advised to allow for traffic delays caused by fire-fighting equipment entering and exiting the roadway.
The blaze took a deadly turn on Tuesday when a bulldozer operator hired by property owners to help battle the flames was killed as his tractor rolled over. It was the second California wildfire fatality in a week. About 300 miles (485 km) away, a 67-year-old man was found dead in a burned-out car last Saturday after refusing to heed evacuation orders in a separate fire that destroyed 18 homes in a mountainous area north of Los Angeles.
That blaze, called the Sand Fire, was listed as 93 percent contained on Friday after charring nearly 39,000 acres (15,783 hectares).