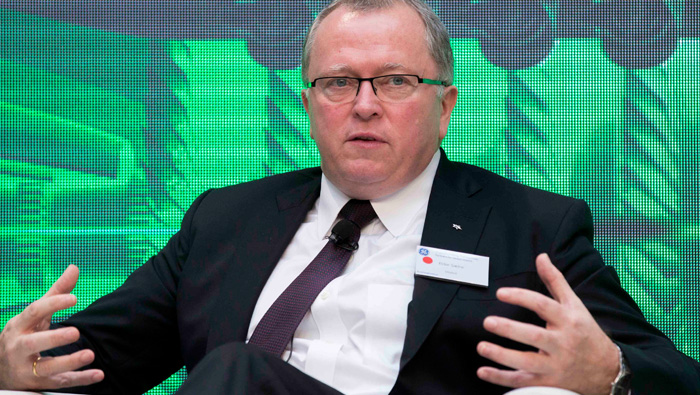 Oslo: The chief executive officer of Norway’s biggest oil company says he has few doubts that crude will again trade at around $50 to $60 a barrel, marking a jump in prices that could be more than 30 per cent compared to today’s level.
“Eventually, I’m very confident that it will,” CEO Eldar Saetre said in a television interview with Bloomberg’s Manus Cranny and Anna Edwards on Wednesday. “But there is a lot of uncertainty. We still have a situation with a lot of volatility.”
Following a June 2014 peak, oil prices collapsed 77 per cent through January, when prices hit a low point of $27 a barrel. Brent crude has since recovered some of that drop as supply disruptions from Nigeria to Canada trimmed a worldwide surplus. But those developments failed to maintain a rally above $50, and oil has since dropped to about $45.
“The market will find a balance in the course of this year,” Saetre said in a separate interview in Oslo after a press conference. “But we believe it will take a while before we get a normal situation on the stockpile side. And it’s difficult to say how the market will play out in the meantime. There’s a lot of uncertainty.”
The fallout of lower oil prices on Statoil’s earnings was broadly what the company had expected, Saetre said on Bloomberg TV. The oil company posted its first adjusted loss as the price decline took its toll. That comes after BP on Tuesday reported a 45 per cent slump in earnings and missed analyst estimates.
Statoil deepened spending cuts after it reported an unexpected loss amid lower crude prices and taxes on unprofitable international operations.
The adjusted loss after tax, which excludes financial and other items, was $28 million in the second quarter after a profit of $929 million a year earlier, the Stavanger-based company said Wednesday. That missed the average estimate of 16 analysts for a profit of $294 million.
"The results were strongly affected by weak oil and gas markets,” Eldar Saetre told reporters in Oslo. Statoil, which is 67 per cent owned by the Norwegian government, has followed rivals such as BP in slashing spending and reducing costs to protect cash flow and preserve shareholder payouts. The company cut its capital expenditure to about $12 billion this year from an earlier target of $13 billion. That’s 40 percent lower than record spending of $20 billion in 2014.
Statoil’s shares fell as much as 4.1 per cent and were down 3.4 per cent to 137.90 kroner in Oslo. That made the stock the worst performer on the 20-company STOXX Europe 600 Oil & Gas Index and pared this year’s gain to 12 per cent.
The company’s adjusted loss was the first for that earnings measure in figures going back to 2008. The loss reflects an effective tax rate of 103.1 per cent, up from 67.8 per cent a year earlier. Statoil’s adjusted net loss at its international unit tripled to $549 million from a year earlier, while profit at its Norwegian unit fell to $436 million from $705 million.
"‘We’re paying taxes in some countries where we’re losing money,” chief financial officer Hans Jakob Hegge said in an interview, citing Algeria, Azerbaijan, Angola and Nigeria. "It’s especially marked by a poor result in the international unit.”
Statoil will pay a dividend of 22 cents a share for the second quarter, in line with the board’s intention of keeping payouts flat for the first three quarters of the year. It continued a scrip programme allowing owners to take payouts in shares.