Airbus suffers €1.4b hit against delays to two key models 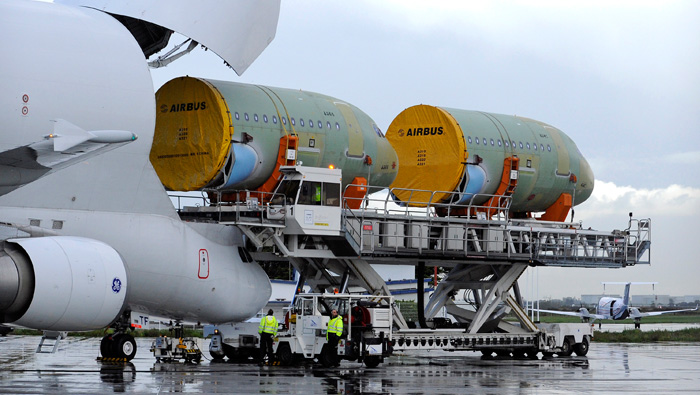 TOULOUSE (France): Airbus took charges totaling €1.4 billion ($1.5 billion) against delays and glitches at two key programmes that have left it even more reliant on a second-half production surge to meet annual earnings goals.
The European manufacturer recorded a hit of €1.03 billion to fix faulty gearboxes on its A400M military transport, together with a penalty of €385 million on the A350 wide-body, deliveries of which have slowed to a trickle amid a shortage of cabin fittings including seats and lavatories.
While Airbus stood by its full-year target of matching 2015’s earnings figure in a statement on Wednesday, a botched first half compounded by engine issues with its revamped A320 workhorse mean a major effort will be required to get delayed planes to customers so that final payments can be booked.
On the A400M, Airbus’s engine partner devised an interim fix for the gearbox allowing a bigger gap between inspections, but is still working on a long-term solution, chief executive officer Tom Enders said on a conference call.
Race to line
The Toulouse, France-based company faces ‘a sprint finish’ to achieve its full-year goals, Sandy Morris, a London-based analyst at Jefferies International, said in an investor note, though with some of the delayed A350s and A320neos completed and awaiting final finishing, it could still get there.
Earnings before interest, tax and one-time items — a figure that strips out the charges — slipped 4 per cent to €1.18 billion in the second quarter, better than the €1.05 billion predicted by analysts. For the full year the company is chasing adjusted Ebit of €4.1 billion.
Shares of Airbus were trading 2.8 per cent higher at €53.13 as in Paris, paring their decline this year to 14 per cent and valuing the business at €41 billion.
Airbus’s main jetliner arm delivered 298 planes in the first half out of the 650 it aims to hand over in the full year. That included just 12 A350s from an envisaged 12-month total of 50 as interiors suppliers including Zodiac struggles to keep up with build rates for the group’s newest wide-body.
The New Engine Option upgrade to the A320 has managed only eight deliveries to date following cooling issues with the Pratt & Whitney turbines powering the first planes. Qatar Airways, due to be the first customer, refused to take the model.
Most disappointing for Airbus will be the recurrence of problems with the A400M, a plane dogged by delays and engine problems for years which Enders has called a "never ending saga.” The gearbox glitch could require further charges as engineers work on the fix, he said in the briefing.