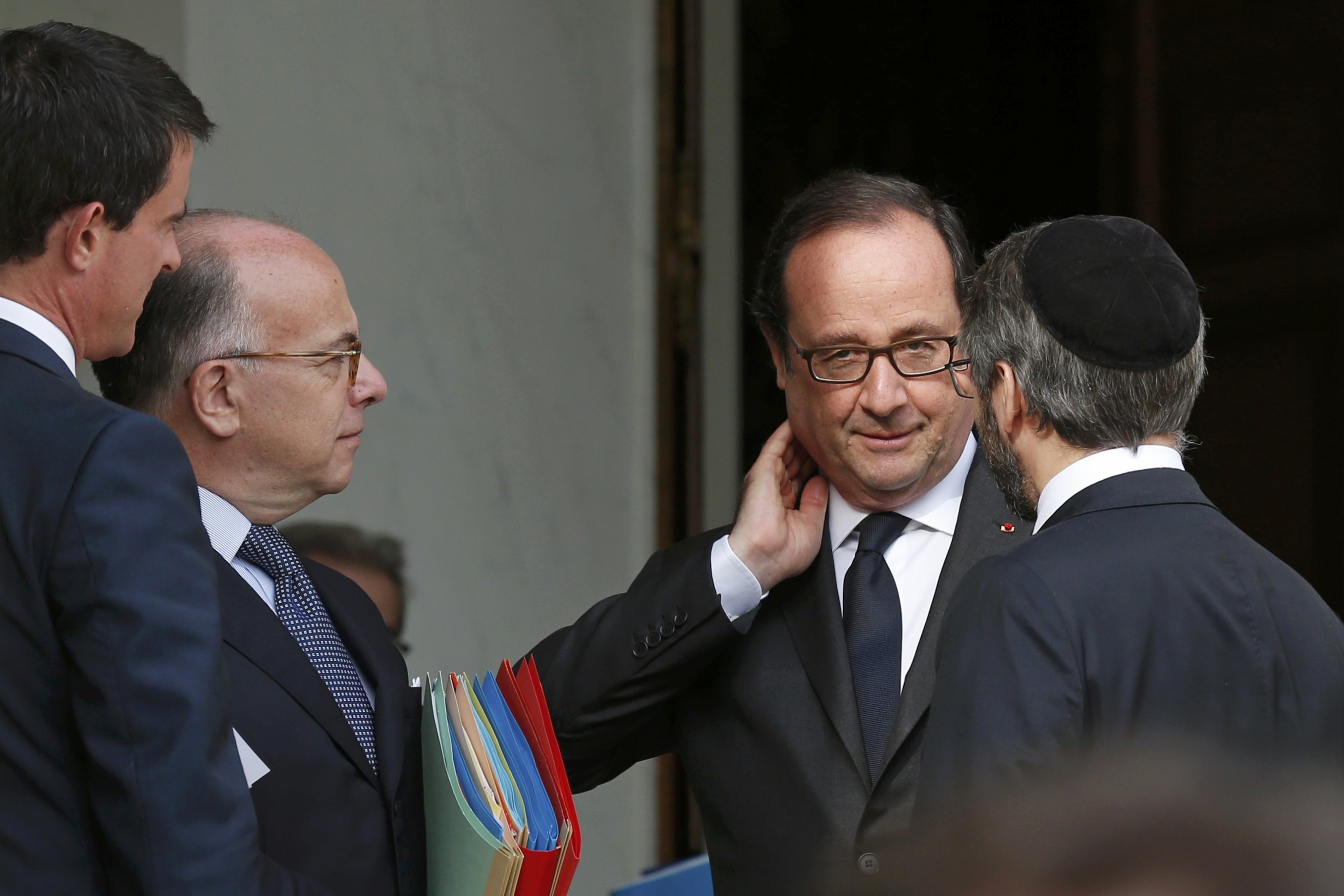 Paris/Sain-Etienne-du-Rouvray: France's Socialist government fended off criticism of its security record on Wednesday in the wake of revelations that one of the assailants who slit the throat of a priest at a church altar was a known would-be militant under police surveillance.
President Francois Hollande met interfaith leaders in an effort to promote national unity. But his predecessor and potential opponent in a presidential election next year, Nicolas Sarkozy, said the government must take stronger steps to track known hardliners' sympathisers.
Tuesday's attackers interrupted a church service, forced 85-year-old Roman Catholic priest Father Jacques Hamel to his knees at the altar and slit his throat. As they came out of the church shouting slogans, they were shot and killed by police.
The attack came less that two weeks after another suspected hardliner drove a truck into a Bastille Day crowd, killing 84 people. Opposition politicians have responded to the attacks with strong criticism of the government's security record, unlike last year, when they made a show of unity after gunmen and bombers killed 130 people at Paris entertainment venues in November and attacked a satirical newspaper in January.
"All this violence and barbarism has paralysed the French left since January 2015," Sarkozy, who is expected to enter a conservative primary for next year's presidential election, told Le Monde newspaper. "It has lost its bearings and is clinging to a mindset that is out of touch with reality."
Amid warnings of a "war of religions" from some conservative politicians, Hollande sought to head off divisions in a meeting with leaders of different religions.
"We cannot allow ourselves to be dragged into the politics of Daesh (IS), which wants to set the children of the same family against each other," the Archbishop of Paris, Cardinal André Vingt-Trois, told journalists after the meeting at the Elysee presidential palace.
Sarkozy has called for the detention or electronic tagging of all suspected militants, even if they have committed no offence. France's internal security service has confidential "S files" on some 10,500 suspected or aspiring militants.
Interior Minister Bernard Cazeneuve rejected Sarkozy's proposal, saying that to jail them would be unconstitutional and counterproductive.
"What has enabled France to break up a large number of terrorist networks is keeping these people under 'S file' surveillance, which allows intelligence services to work without these individuals being aware," he said on Europe 1 radio.
Cazeneuve later said summer festivals that do not meet tight security standards would be cancelled, and announced a shift in the deployment of 10,000 soldiers already on the streets, saying more would now be sent to the provinces.
Tuesday's attackers arrived during morning mass in Saint-Etienne-du-Rouvray, a working-class town near Rouen, northwest of Paris, where Father Hamel had been celebrating mass. They took hostages, one of whom was badly wounded during the attack.
IS said on its news agency that its "soldiers" carried out the attack. It has prioritised targeting France, which has been bombing the group's bases in Iraq and Syria as part of a US-led international coalition.
One of the attackers, 19-year-old Adel Kermiche, was a local man known to intelligence services after failed bids to reach Syria to wage war.
Kermiche first tried to travel to Syria in March 2015 but was arrested in Germany. Upon his return to France he was placed under surveillance and barred from leaving his local area.
Less than two months later, he slipped away and was intercepted in Turkey making his way towards Syria again.
He was sent back to France and detained until late March this year when he was released on bail pending trial for alleged membership of a terrorist organisation. He had to wear an electronic tag, surrender his passport and was only allowed to leave his parents' home for a few hours a day.
Kermiche's tag did not send an alarm because the attack took place during the four hour period when he was allowed out.
Investigators carried out DNA tests on the body of the second attacker on Wednesday. A judicial source said investigators believed the second assailant was a 19-year-old from southeastern France who was previously unknown to police.
He has been named so far only as Abdel Malik P., with the formal identification awaiting the result of the genetic test, the source said. His identity card was found at the home of Kermiche.
According to the justice ministry, there are just 13 terrorism suspects and people convicted of terrorist links wearing tags such as that worn by Kermiche. Seven are on pre-trial bail. The other six have been convicted but wear the electronic bracelet instead of serving a full jail term.
Since the Bastille Day killings in Nice, there has been a spate of attacks in Germany too, creating greater alarm in Western Europe already reeling from last year's attacks in France and attacks this year in Brussels.