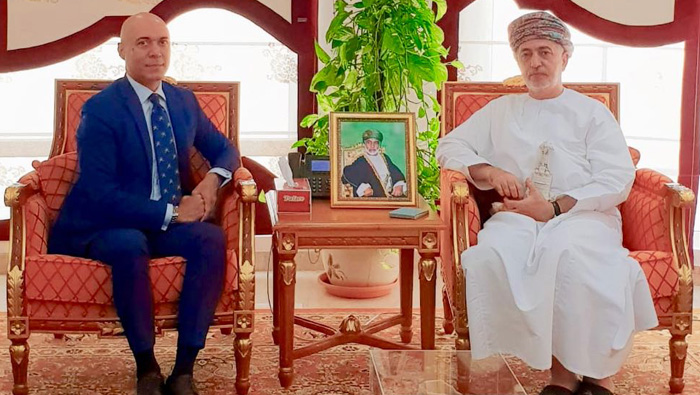 Muscat: Pakistani Ambassador Ali Javed and Sheikh Mohammad bin Said Saif Al Kalbani, Minister for Social Development of the Sultanate, met at the latter’s office yesterday.
The ambassador gave a comprehensive briefing on the latest status of bilateral relations between the two nations, exchange visits between parliamentary, political, and military leaders, people-to-people contacts, as well as finalised and almost-completed bilateral trade accords aimed at boosting cooperation.
Praising His Majesty Sultan Qaboos bin Said’s five decades of leadership, the ambassador underlined the core strengths of bilateral relations anchored on the commonality of the two countries’ strategic vision regarding bilateral, regional and international issues, and highlighted the performance of the Pak Oman Investment Company (POIC).
Established upon His Majesty’s visit to Islamabad in 2001 with an initial $100 million in assets, the POIC now has assets worth $600 million.
Meanwhile, the minister highlighted the two nations’ historical ties and expressed his appreciation towards the current trajectory and spectrum of bilateral relations, pointing to the July 25 general elections in Pakistan as yet another milestone achieved by its people and government.
The minister also commended Pakistanis in Oman for their immense service and contribution to the Sultanate, and expressed support for the Pakistan Social Club and its plans to build central premises and establish regional branches.
The minister remarked that Pakistan and Oman are strategic neighbours with a common history, which means that they have a common future as the prosperity of one complements the other.
The ambassador presented the minister with the Pakistani Mission’s Newsletter and a Pakistani “Chausa”, a mango known globally as the “King of Kings”.
There are currently more than 272,000 Pakistanis in Oman, accounting for the 5th largest presence of Pakistanis outside their country. PIA, Shaheen Air, and Air Blue, together with Oman Air and SalamAir, operate more than 60 weekly flights between 10 destinations in both nations.