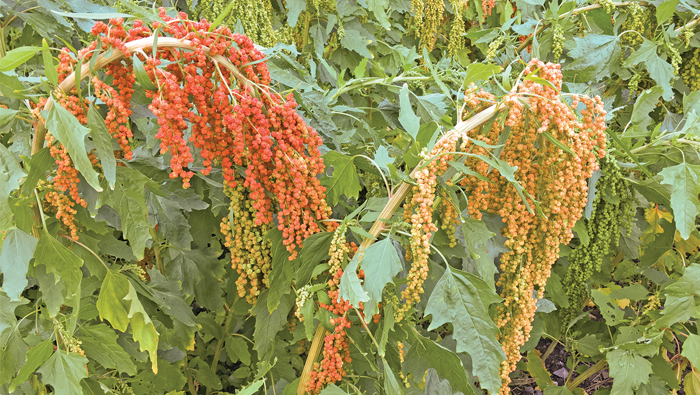 Muscat: Oman’s climatic conditions provide the perfect environment to grow quinoa, a leading agricultural researcher has said, as the Sultanate looks to increase its agricultural output as part of the nation’s plans for economic diversification.
Dr Mohammad Shahid, who works at the Plant Genetic Resources Lab of the International Centre for Biosaline Agriculture in Dubai, as a geneticist and gene bank curator, has been conducting experiments on quinoa’s ability to thrive in arid Middle Eastern conditions, and presented his findings at the recently-held Agritech, Aquaculture and Food Safety Symposium in Oman.
“Large parts of the Middle East have similar types of climate and soils, where the same quinoa varieties can be cultivated successfully, and our quinoa yield trials in different parts of the United Arab Emirates showed that many of its cultivars gave good yield in sandy soils with saline water for irrigation,” said Shahid, speaking to the Times of Oman.
“Oman has more or less a similar kind of climatic and field situation that exists in the UAE. Hence the new crop can be successfully cultivated in the country even in its marginal agricultural farms.
“It may improve the food security in the region as the crop is suitable for marginal lands with salinity problems,” he added. “Many countries of the region have salt problems in agricultural farmland, where quinoa can be grown successfully. Quinoa is a highly salt tolerant compared to other major crop. Up to a certain limit, salinity doesn’t affect its production. But make sure that there is market for quinoa in Oman before starting its cultivation there.”
Originally from South America, quinoa’s high nutritious value has made it an overwhelmingly popular food the world over, sparking a craze for it among fitness enthusiasts and those seeking to lead a healthy lifestyle. Its high protein content means it is now found on several supermarket shelves in Oman and other Middle Eastern nations, and features prominently on restaurant menus.
“There are many reasons for the popularity of quinoa, because it is a highly nutritive crop that contains all nine essential amino acids, it is gluten free and it grows well in marginal lands including soils with salinity problems,” said Shahid. “Quinoa is a relatively hardy crop, but sometimes in its early stage, a fungus attacks the seedlings and kills them. That needs a proper fungicide treatment. A few insects at later stage may also damage the plant but with right pesticide they can easily be controlled.
“The nutrient value of the seeds is comparable to that of dried whole milk, and the protein quality and quantity of the seeds is often superior to those of more common cereal grains,” he added. “Its amino acids are considered well-balanced to that of human and animal nutrition, similar to that of skimmed milk. It has lower sodium content, but its calcium, phosphorous, magnesium, potassium, iron, copper, zinc and manganese contents are higher than those of wheat, barley or corn.”
Quinoa is among the highest proteinaceous grains currently available, with a protein content of 13.8 per cent, in comparison to corn (8.7per cent), millets (11.9 per cent) and rice (7.3 per cent). Only buckwheat (18.5 per cent) and barley (14.7 per cent) are found to have higher protein content among grains. “Quinoa leaves can be eaten as a leafy vegetable,” said Shahid, explaining the other benefits of the crop. “The leaves and stalks can be fed to ruminants. Quinoa can germinate in a mixture of one-third seawater, which averages 25,600 ppm and can be grown under extremely dry conditions as 200m rainfall in sand. Clearly, this is a crop with excellent potential for both drought-prone and saline areas. The ICBA’s Genetic Resource Programme has been studying a range of salt-tolerant crops for their ability to produce economic yields and ultimately introduce them to local farmers.”