Chronicles of the Oman Fighting Championship 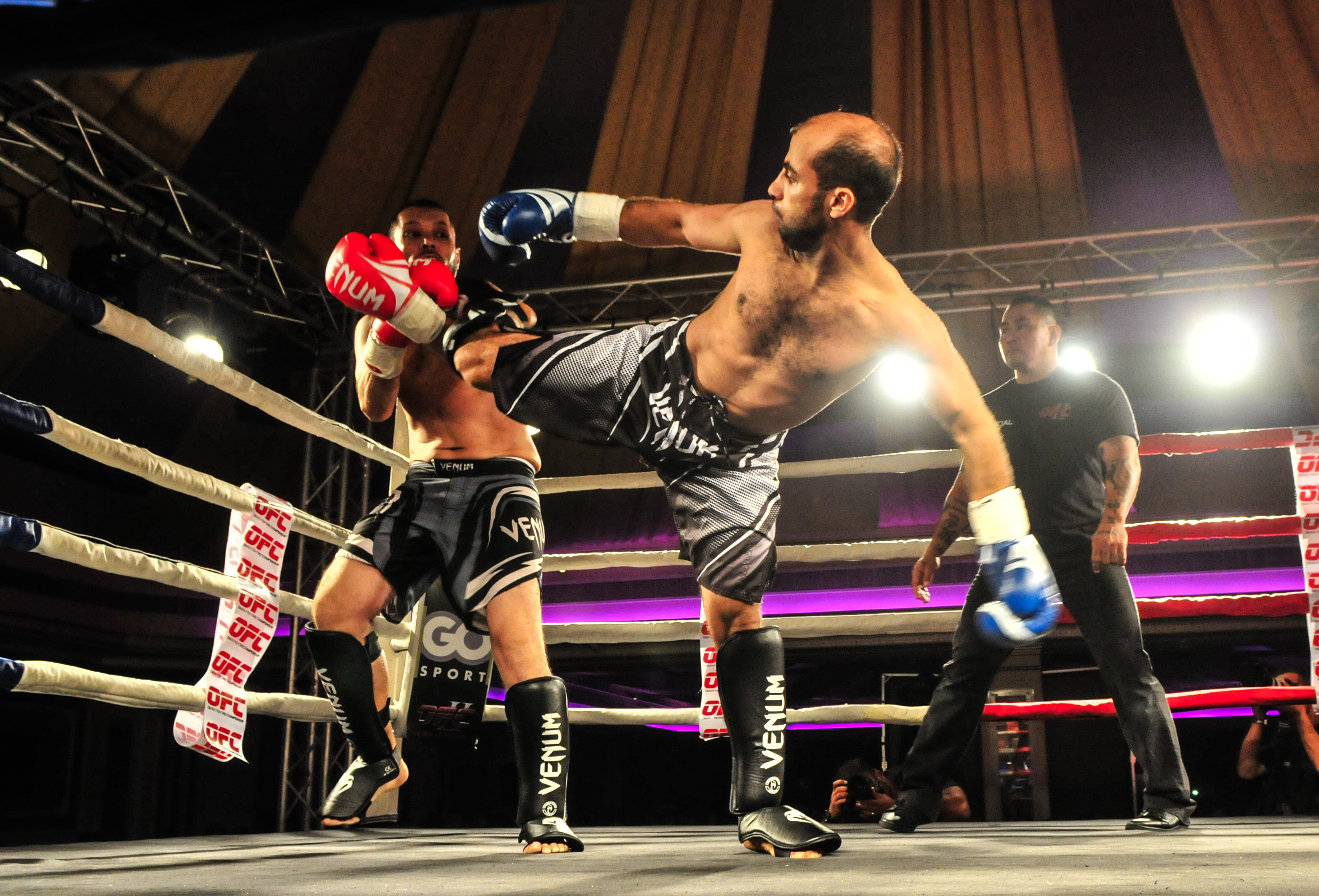 I was in a whole new, sweaty, energetic world where the temperatures were soaring and adrenaline was rushing and the high levels of testosterone were downright palpable. In my admittedly short life, I’d never seen so much manliness in one room. The commentator was contributing to the frenetic buzz as he took down the names of the men getting ready to face-off in a bid for the ultimate OFC title.

I met the contenders the day before the match at the Go Sport shop in Muscat Grand Mall where they were being weighed-in. The atmosphere in the store was chaotic. Entire crews from different clubs across Oman were cheering, holding placards, joking, and playfully taunting one another in support of their club’s chosen representative for the championship.

I watched the competitors, who were more subdued than their cheering entourages, their eyes hard with looks of determination.

The weigh-in itself involved the two fighters scheduled to battle one another being called on stage, asked to remove their T-shirts (much to the delight of some of us in the crowd), and step up on the scale. The emcee yelled out the respective weights into the mic. Their weights were noted by the scribes standing on stage, and the pair turned to face one another in a boxing stance for the camera. Then the whole process was repeated for the next pair. It became particularly interesting when one set of boxers took the pose too seriously, lunging at one another so fiercely that the organisers rushed on stage to jump between them. Needless to say, the crowd of well-wishers went crazy and I was pretty sure that shoppers in the far corners of the mall must’ve thought the building was under siege.

The organisers, members of Oman Fighting Championship, a non-government, non-profit organisation that was founded in 2015 to promoting combat sports in the Sultanate, were scattered throughout the weigh-in making sure the event ran smoothly, looking after the clubs, and catching up with their trainers and fighters. When they came together to talk to me, they made for an impressive, motley crew of men and one lady, all dressed in black who looked like they meant business.

The OFC team is made up of dynamic personalities, united by their shared desire to promote mixed martial arts in Oman. The core team includes President Baqar Haider; events director, Jessica Hern; vice-president, Reza Mostofi; and OFC director and fight card manager, Fayyad Samarah. A few years ago, they began noticing many clubs opening across the Sultanate offering training in various forms of combat sports, and with these openings, a surge of talented Omani fighters began to emerge. The group of veteran fighters saw in these young combatants the potential for Oman to compete at an international level, but first, they had to organise.

The OFC began by organising fights and competitions at the local level to expose the fighters to a professional ring in preparation for competitions abroad. The organisation is now accredited by the World Kickboxing Federation and each of their fighters has his own “fighter’s passport,” a fight record that will aid in pairings for future matches.

Beyond acting as an organising body for competitions, the OFC crew also closely monitors the instruction and regiment that the clubs take their fighters through, and they help to cater to the nutritional needs of the fighters with fixed diet plans.

Though their long term plans are to take their fighters abroad to compete, as they have already done with Omani OFC member, Hamood Al Tuhami, who competed in Dubai, the OFC’s main focus at this point is developing the sport locally and raising awareness here in Oman.

For the OFC team, one of the most interesting aspects of their annual competition in Oman is bringing together fighters with varied styles, experience, expertise, and strengths for one heck of a combat sports throw-down. Many fighters in Oman start with the Japanese sport, karate, or Korean taekwondo and move into kickboxing or boxing, which most of the OFC fighters concentrate on for the championship. Each style helps to develop different techniques, so fighters with a history of studying taekwondo, are strong with their legs as it is a 75% leg sport, while those who began training in karate have their greatest strength in the speed of their hands. Each combatant uses his background to develop their own signature style.

The young contenders themselves looked tough, and a little angry, up on stage, so I was nervous as I approached them. I straightened my shoulders, cleared my throat, and walked up to the group with as much confidence as I could fake.

I was surprised at the polite, well-mannered, chivalrous men I met. They were just normal guys. Well, normal guys with great bodies and monster strength whose chosen sport was pummelling other strong, normal, polite men in front of a screaming audience.

“It’s actually easier for us to control our tempers than most people, thanks to the discipline we learn through our training,” last year’s winner, Hamood Al Tuhami, explained.

All OFC fighters go through a rigorous training regime that focuses predominantly on fitness, technique, and nutrition. And every club trains their fighters on a particular style of fighting and customise their regimes according to their body types.

Because fighting is one of the most stressful sports in the world, it is extremely important for these athletes to maintain both physical and mental fitness, as one without the other makes for a poor fighter.
The coaches have seen many a strong fighter succumb to the mental pressure on the final day of the match and fail to perform well. To help them get strong in mind and body, most of the fighters competing in this year’s OFC were trained two or three times per day for the last year.

The more time I spent with this passionate, dedicated, and seemingly fearless group — the sounds of their cheering, heckling, and laughter filling the room — the more I began to feel emboldened myself. I wanted their ferociousness, I wanted the camaraderie they shared.

The bond these fighters have cuts across ethnic, economic, and religious backgrounds, as they stand united behind their club’s hero.

The crowd erupted again as Vinod Kumar, a blue collar worker from Punjab, was called on stage. I spoke to him after he walked off stage, and despite his limited English, his message was crystal clear: He felt indebted to the men here who supported him, the comrades who helped enable him to pursue his dream of competing in the ring.

Ensuring that others have the opportunity to chase such a dream is what drives Omani fighter, Sami Ali, a 166cm tall warrior with fire in his eyes. “I fight to promote combat sports in Oman, to get the government involved in hopes that the ministry will promote the sport within the Sultanate so anybody and everybody in my country who has an interest and the skill can take his chance in the ring,” Sami explained.

The 28th of May, 2016 was the day to decide the fate of the aspiring fighters who had given their hearts, souls, blood, and sweat for a chance to win the ultimate championship. The energy, anxiety, and excitement of the crowd filled Bahja Hall in Qurum, transforming it. All the flood lights and expectant eyes were directed towards the ring, the spotlights reflecting off the sweat-slicked bodies of the fighters. As I watched the fight, I winced everytime the fighters got punched, and there were times when I forgot to blink so intent was I on not missing the swings, jabs, punches, and kicks flying with heart-stopping speed.

When Vinod Kumar and Hussain Jahjah’s gloved hands were raised in victory, I realised that I’d forgotten who I’d been cheering for. I was simply filled with a surge of pride for these strong, brave athletes. I couldn’t even imagine how proud their coaches must have felt at that moment.

Mixed Martial Arts and combat sports, are all about the spirit, desire, need, cravings, and raw rage inside all of us, which these athletes discipline and train and craft into an emotional and physical art form.
My high-octane introduction to the world of combat sports stayed with me. In my quite moments, I find myself pondering if I have what it takes to stand in a ring wearing massive gloves, face-to-face with somebody who is eager to beat the living daylights out of me.

I’m not there yet. I’ve still got a lot of training and character building to do, but until I’m ring-ready (if that day ever comes), the OFC has earned a loyal fan and follower; one more voice to add to the symphony of ringside voices crying out for their heros.