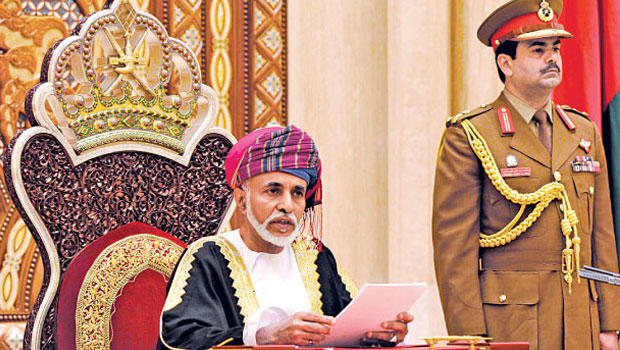 It started as a dream 46 years ago in Salalah when His Majesty Sultan Qaboos bin Said vowed that he would change the face of Oman for the better.
Now we know that His Majesty does not take his responsibilities lightly. He has delivered every promise to his people, forfeiting his personal comfort and freedom to take his country from relative obscurity to a state of considerable influence.
Mind you, Oman was never an easy country to develop and Omanis then were not really ready for change. But His Majesty made the colossal job look easy. Every Omani knows it is far from that, but it is amazing how youngsters today take this development for granted.
A well known editor, who interviewed him in the early 1970s, said His Majesty was a man in a hurry and he made it clear that his vision of Oman would not be comprised. Though there were limitless resources then and opposition to overcome, the journalist said His Majesty knew exactly how to get results. He had a special way of dealing with difficult problems and asked to be informed personally about every detail on all important matters.
He also cemented the foundation of the success that everyone enjoys now from those early days in the 1970s. Omanis, who came back after leaving the country years earlier, could not recognise the country just a decade after the Renaissance.
His Majesty's early promise of building the essential infrastructure of schools, hospitals, transport and communications in the first 10 years were already prevalent. Literacy rates are above the regional average and 72 per cent for people living in towns and cities, and the Sultanate is connected to the world through a string of airports and seaports.
It was not just the infrastructure that His Majesty triumphed in those days, according to a retired British diplomat.
With diplomacy, he settled the conflict in the south of the border in an exceptional manner. For years now, it has stayed settled to shine the light of security for all the parties concerned. But his biggest triumph, according to tribal elders, was his ability to arbitrate disputes among feuding tribes. It won him a permanent acceptance and allegiance from his people from all four corners of the country. Tribal elders said no leader in the history of Oman has championed this, except His Majesty, of course. He united the country with the full backing of all tribal elders just months after the beginning of the Renaissance.
This is a gift that many international political commentators say most world leaders do not possess. As we are now marching towards the fifth decade of the Renaissance, we look back to see countless achievements that have been highlighted many times before. But better years for Oman are still ahead and many are confident of that. Oman has matured enough for grander achievements. With His Majesty's leadership, the fifth decade will propel Oman to a privileged position that has not been achieved by any developing country in history.
History will also look back and shine an illuminating light on Oman as the fastest growing country of its time. Thanks for the compassion of its leader, His Majesty said, Oman has not left any stone of prosperity unturned. Another jewel in the crown is the meet-the-people tour of His Majesty, which he conducted for many years. The Sultan is perhaps the only leader in the world, who has travelled extensively in his own country to get a first-hand experience of the needs of his subjects.
On the economic front, Oman’s economic performance over the past 46 years has been spectacular, with its gross domestic product (GDP) increasing from $256 million in 1970 to $93.4 billion in 2015.
Beyond the country’s borders, changes in the diplomatic environment since 1970 have also been impressive. Oman has an excellent relationship with all its neighbours, thanks to His Majesty’s diplomacy. He won international accolades last year when he negotiated successfully to bring together the United States and Iran to the negotiation table, which led to a historical nuclear deal.
Omanis can only look forward to a brighter future knowing that the foundation of excellence has been firmly established in the last 46 years.