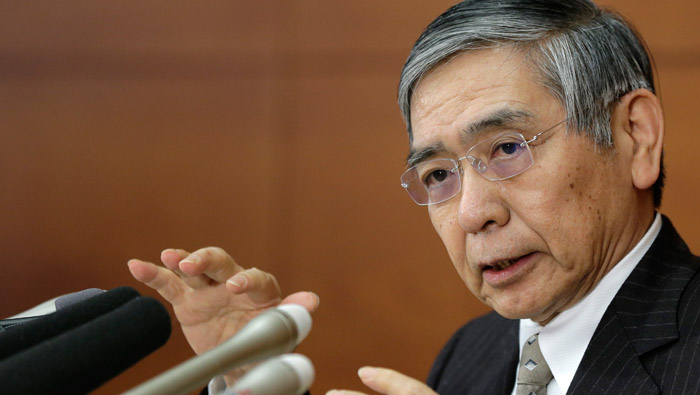 CHENGDU (China): Bank of Japan (BoJ) governor Haruhiko Kuroda said on Saturday he would ease policy further if necessary to achieve its 2 per cent inflation goal, while reiterating a commitment to continue with the current stimulus until prices are anchored there.
Speaking to reporters on the sidelines of a G20 meeting of finance ministers and central bankers in the southwestern Chinese city of Chengdu, Kuroda maintained an upbeat view on the Japanese economy and price outlook in spite of rising market expectations for more BoJ monetary stimulus.
A majority of economists polled the BoJ to ease policy next week, forecasting a combination of measures in another attempt to kick-start inflation. "If the economy's (recovery) trend continues, leading wages and prices to rise in a virtuous cycle, which is continuing, prices will eventually rise to the 2 per cent price stability goal," Kuroda said.
"We always examine risk factors for the economy and prices and will take additional easing steps if necessary to achieve the price stability goal. I'll explain that together with Japan's economy, prices and monetary policy at this meeting."
Kuroda went on to say that the major topic of G20 debate is how Britain's vote to exit the European Union would affect the global economy. "Uncertainty will continue, including negotiations between Britain and the EU, which will take years. So we will be paying attention to such things," Kuroda said, adding that there was no change in expectations for global growth to rise despite Brexit.
Kuroda also shrugged off speculation about "helicopter money", saying that it would be prohibited by law if it meant the BoJ directly underwriting government debt.
"If it means that central banks are directly underwriting government bonds, or managing monetary and fiscal policies as one, that would be prohibited in Japan as well as other advanced economies, as lessons from history tell us," he said.
Japanese markets have risen this month on speculation that authorities, battling to revive an economy dogged by decades of anaemic inflation, will resort to using helicopter money, possibly issuing perpetual bonds to underwrite public debt.
"If governments utilise fiscal policy while central banks ease policy from the economic and price viewpoint, that would boost the multiplier effect on the economy. This so-called policy mix is nothing wrong as macro policy.