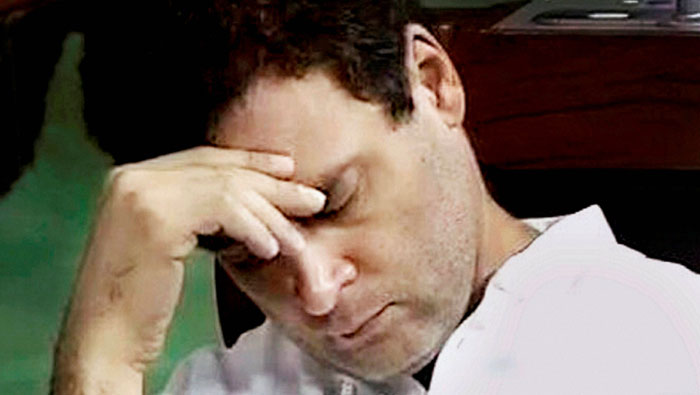 New Delhi: Congress Party vice president Rahul Gandhi appeared to have dozed off in the Lok Sabha on Wednesday during a discussion on attack on dalits in Gujarat, inviting barbs from Bharatiya Janata Party (BJP) and Bahujan Samaj Party (BSP) while Congress defended its vice president and suggested that he was checking his mobile.
Congress also showed a photograph of Prime Minister Narendra Modi in the Lok Sabha from November last year to claim that it shows he was also sleeping in the House.
Rahul Gandhi was caught on the Lok Sabha TV with his eyes closed and appeared to be catching forty winks when Home Minister Rajnath Singh was replying to a short discussion on the issue of attack by vigilantes on dalit youths who were skinning a dead cow in Una in Gir-Somnath district.
Attacking the Congress leader, BJP said he was only interested in doing politics on dalit victims and not in their getting justice.
"It shows that his heart is not on providing justice to dalit victims. He just wants to do politics. If he was really interested in ensuring justice, then he would not be sleeping," Union Minister Thaavar Chand Gehlot said.
Taking a dig, BSP chief Mayawati said it showed how serious Gandhi was about dalits.
"This publicity is going on that the Congress vice president will go to the spot (in Gujarat) but he was sleeping when the issue was being debated in the House. It shows how serious he is about it," she said.
Putting up a strong defence, Congress spokesman Abhishek Singhvi said it was an attempt to trivialise and debase an important issue with a "false" story.
"It is completely false and is condemnably false story that somebody is sleeping in the House. The last I heard was that checking one's cell phone is neither a crime nor negligence."
He said, "What I am castigating in the strongest possible words this attempt, be it by the media or any other quarters, to trivialise, debase and devalue a most important issue. We are discussing dalit issue and your focus on this great story that you are running which is false."
The party also showed a photograph of Modi in the Lok Sabha on November 26, 2015 in which, it claimed, he appears to be sleeping.
Congress MP Renuka Chowdhury said, "He (Gandhi) was not sleeping. How can someone sleep amidst so much noise? It is so hot outside and we close our eyes inside the House to relax and get relief from the burning sensation caused after standing in sun for long outside.
"The atmosphere inside is cool and we rest our eyes to retain moisture. Media makes up things...."