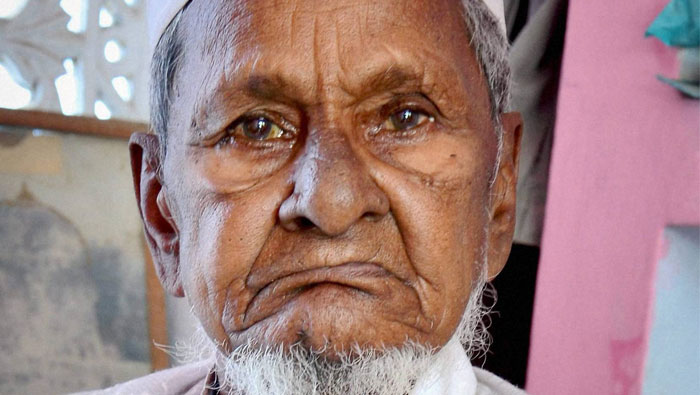 Ayodhya: Hashim Ansari, the oldest litigant in the Ayodhya dispute who was associated with the case since 1949, died on Wednesday due to heart-related ailments.
Ninety-five-year-old Ansari breathed his last at his residence in the wee hours, according to his son Iqbal.
Born in Ayodhya, Ansari was the first to file the suit on the matter in the court of civil judge of Faizabad in 1949.
Ansari along with six others became the main plaintiff in the 'Ayodhya title suit' filed by the Sunni Central Waqf Board in the court of Faizabad civil judge.
In 2010, the Allahabad High Court in its majority verdict allotted one-third of the disputed site in Ayodhya to Nirmohi Akahara.
The other two-thirds portion has been given equally to be shared by the Waqf Board and the side representing temple.
Soon after the verdict, Ansari had called for burying the dispute and making "a fresh start". In his attempt to find an out-of-court resolution to Ayodhya dispute, Ansari had in February last year said that he will involve prominent members of the minority community for a peaceful conclusion to the matter.
Ansari also met Akhara Parishad president Mahant Gyan Das to discuss a new proposal for resolution of the dispute.
The formula for out-of-court settlement talked about the 70 acres of disputed premises accommodating both mosque and temple with a partition wall which will be 100 ft high.
Ansari had also stated that he wants to create a mass awareness and gather the support of community leaders for the cause.
Ansari had told PTI, "This is neither one man's job nor a one man show. If we want to find a peaceful solution to this more than 60-year old problem that has claimed many innocent lives in the communal riots, it is necessary that responsible people of Muslim community and religious leaders must come out to discuss it."
The negotiation process, which started after the September 30, 2010, Allahabad High Court verdict over Ayodhya issue, was largely being supported by cross section of the civil society and religious leaders from both communities.
Reacting to Ansari's death, the Vishwa Hindu Parishad (VHP) said hardliners should take a lesson from Ansari's life.
VHP spokesman Sharad Sharma said, "Hashim was like a bubble in water. His mindset was different from other plaintiffs and hardliners. This is the time for mourning and grief".
Convenor of Babri Masjid Action Committee Zafaryab Jilani expressed grief over the death of Ansari.
"In 1961 he was the fifth litigant in the case filed by the Waqf Board. With his demise a voice has become mute. He was of the view that the issue cannot be solved through talks, it could be resolved legally," Jilani said.
Member of All India Muslim Personal Law Board Maulana Khalid Rashid Farangi Mahali said Ansari was one of the oldest plaintiffs, who fought the legal battle from the beginning, in a democratic manner.
"He will be remembered by the entire community. He tried to resolve the issue amicably with Hindus, but unfortunately he failed to gain success. But even today not only Muslims, but even Hindus of Ayodhya view him with great respect. He adopted a legal way to solve the dispute and never politicised it," he said.
The head of the Kalkipeetha Pramod Krishnam said Ansari was a true patriot, who always worked to strengthen the
'Ganga-Jamuna tehzeeb' of the country.
"At time when people are engaged in spreading hatred, his demise is unfortunate for the country," he said.