Food lovers in Oman complain of too many ‘restaurant’ taxes 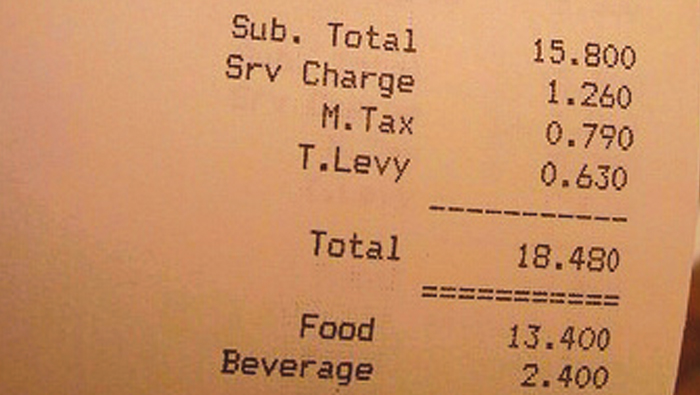 Muscat: Food lovers in Oman are complaining that online restaurants throughout the country are charging too much tax for food sold to customers.
In a detailed thread on the popular facebook group ‘What’s Happening Muscat Oman’ (WHMO), restaurant goers brought up the issue of the service tax being charged, irrespective of the type of service customers receive.
Many restaurants in Oman charge a service tax, while others leave it as an optional tip from customers. Charging a service tax is not mandatory according to Omani law, but where they do charge a service tax, restaurants then charge the municipal tax on the total amount of sales, combined with the service rates.
A Muscat Municipality ordinance states that this is the correct procedure, and that it is mandatory for first grade restaurants to charge a five per cent municipal tax on total sales which,by default, sometimes includes service charges.
“I do not believe that the service tax is a ‘tax’, but it is a service ‘charge’. Restaurants use different ways to calculate how much they charge their customers, and some calculate the final amount by adding a percentage for service. It is not mandated by law, but there is nothing in the law that says restaurants cannot charge money for their service.
“The service charge has nothing to do with your satisfaction with the service. In some countries, like the US, people are used to ‘tipping’ for services, and some restaurants might mention a suggested tip as a service charge, which is optional to pay by the customer.
“In Oman, there is no tipping culture and the service charge is not intended to be an optional ‘tip’ that customers may choose or choose not to pay, depending on their satisfaction. If the restaurants makes it clear upfront that there is a service charge to be paid, the customer has no legal basis for refusing to pay it.
“So, again, the service ‘tax’ is not a tax, but a charge for providing a service. Therefore, it is not unreasonable for the tourism and municipality taxes to apply the service charge,”said a lawyer in Oman who wished to remain anonymous.
“It is unfair to charge service taxes. It is not something we have to pay if we don’t like the service. I wish that the government would do something about removing these charges. Tips can be in place when we like the service but, otherwise, it is not something we should be forced to pay,” said Roohi, a restaurant patron in Oman.
Another Oman resident, Bader Al Lawati,said he initially thought it was not correct, but sees that the service charge is paid to the staff, who generally receive very low wages. “Tipping is not as acceptable here as it is, say, in Australia, where people, by default, pay 10 per cent in tips. “I would agree that the service tax is not correct, but in the grand scheme of things I would consider it a mandatory tip to those who make very little, which I am totally ok with.
“In cases in which a restaurant does not give their service charge income to their staff, I would say that is completely immoral and I don’t see how it could be legal. I work with a few restaurants who, thankfully, do give the service charge to the staff, but to claim that it’s a service charge and not to give it to the service staff is wrong.”
Meanwhile, an official from a restaurant, which recently turned into a ‘first grade’ establishment, told the Times of Oman, “Earlier, we only charged the service tax on our bill. However, since we became a first grade restaurant early this year, the municipality came to us and said that we needed to charge a five per cent municipal tax, as well. This tax, according to the municipality, should be charged on our total bill, and that includes the service tax. So this really came from the municipality.”