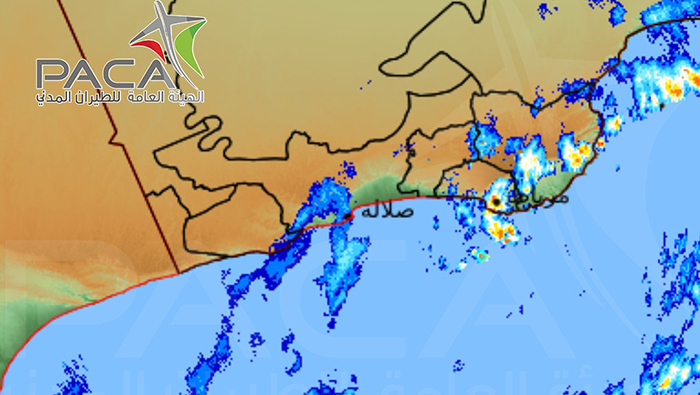 Muscat: An alert from the Public Authority for Civil Aviation (PACA) has said that Cyclone Mekunu's storm clouds were 40 km away from the Wilayat of Sadah, Dhofar.
Tropical storm Mekunu: Prepared for the worst and hoping for the best
Weather prediction charts also showed that the tropical cyclone will intensify into a Category (2) storm within 24 hours, PACA announced in Alert No. 2 at 4:00 am local time.
The meteorology department also said that medium to heavy rainfall, between 12-25 mm, had been recorded in the eastern parts of Dhofar of Governorate, in Halaniyat, Sadah and Mirbat.
Here’s how tropical storm ‘Mekunu’ could affect Oman over the next three days
According to the alert, “The latest charts and satellite imageries of the National Multi-Hazard and Early Warning Centre showed the continuous movement of the tropical cyclone. It also revealed that its centre is located at latitude 12.5 degrees North and long 56.0 degrees East, around 500 km away from Salalah city. The nearest convective clouds to Sadah’s coast was at a distance of 40 km with surface winds blowing at speeds between 70 to 80 knots (126 to 144 kmph)."
Video: 10 things to remember to stay safe ahead of Cyclone Mekunu
Latest weather maps and numerical weather prediction charts show that the tropical cyclone will intensify into Category (2) within 24 hours, with continuous cloud advection and isolated rain. With the centre of the tropical cyclone approaching Dhofar and Al Wusta coasts on Friday and Saturday, it could lead to very heavy thunderstorms with strong winds.
The sea state will be rough along Dhofar and Al Wusta coasts with the maximum wave height between 5 to 8 metres and it will also get rough along the South Al Sharqiyah coasts with the maximum wave height between 3 to 4 metres.
The Public Authority for Civil Aviation advises everyone to follow weather bulletins and to take precautions regarding wadis and flash floods. PACA has also asked people to avoid riding the sea.