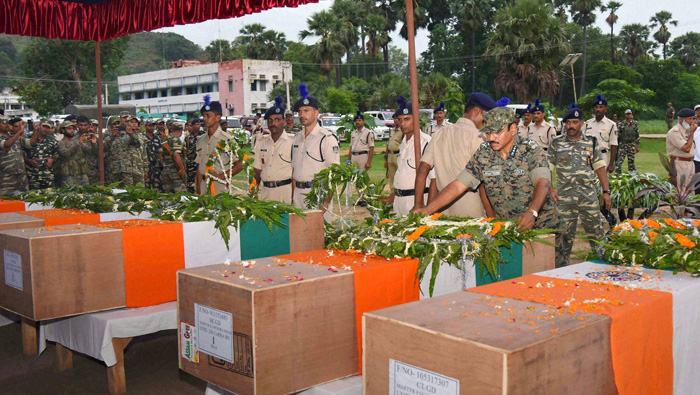 Patna: Ten commandos belonging to the elite CoBRA battalion of Central Reserve Police Force (CRPF) were killed and five others injured after a group of 200 Naxals surrounded troops and blew off 22 improvised explosive devices (IEDs) in the jungles of Bihar's Aurangabad district.
This is one of the biggest casualties of the elite CoBRA unit which has been raised by the CRPF in 2008 for undertaking special jungle/guerrilla warfare operations.
Officials said the encounter started on Monday afternoon in Dumari Nala area, under Madanpur police station area of the said district, in the Maoist hotbed of the Chakarbanda forests when the CoBRA team assisted by other forces launched a special operation in the hunt for some ‘top Naxal leaders’ suspected to be in the jungles.
They said after the CoBRA made the fire assault and killed three Naxalites, they were trapped in a ‘heavily mined’ area where a squad of over 200 Maoists surrounded the troops and blew off 22 IEDs amidst firing which led to fatal injuries to the commandos, specially trained in jungle warfare operations by the CRPF.
"A chopper was sent around 3:25pm to fetch the injured but as the area was heavily mined, the troops could be evacuated only by 8pm on Monday," they said. While eight commandos were killed on the spot, two others succumbed to their injuries later, the official said, adding the bodies of the three Naxals have been "recovered".
"Few more Naxals are suspected to have been killed and the search is still on," they said. Some arms and ammunition, including sophisticated ones like two AK-47 rifles, INSAS rifle and under barrel grenade launcher were also recovered from the site by the CoBRA unit in an indication that senior Maoist leaders were present in the area.
Officials said five other personnel were critically injured in the fierce gun battle that ensued after the IED blast and they have now been admitted to various hospitals. CRPF director general K Durga Prasad, Inspector General (Operations) Zulfiquar Hasan and other senior officers of the force have rushed to Bihar from Delhi.
In the wake of the incident, Home Minister Rajnath Singh spoke to Bihar Chief Minister Nitish Kumar and assured him of all possible help to tackle the Maoists. Expressing grief over the incident, Kumar ordered Home Department officials to immediately pay Rs500,000 compensation to the next of kin of each deceased as per provisions of the state government.