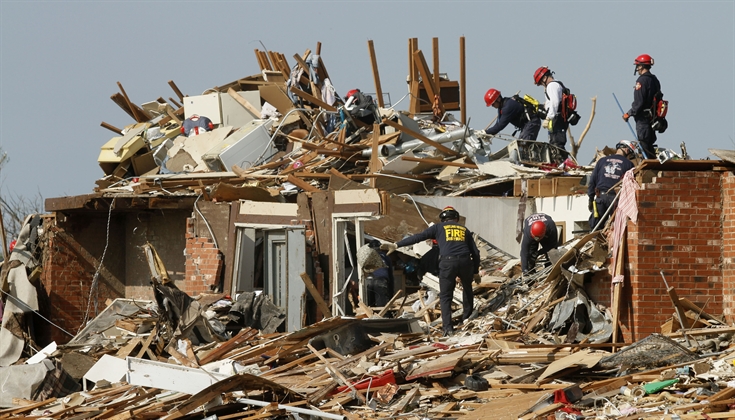 Atlanta: Rescuers searched door-to-door for survivors in the central US state of Missouri following a deadly storm that swept through the region, triggering dozens of tornadoes and damaging floods.


Three people were killed in the small town of Golden City, Missouri, officials said, while residents in the state capital Jefferson City were taking stock of damage caused by what the National Weather Service called a “large and destructive” tornado Wednesday night.


The weather service estimated that the tornado was an EF-3 on a scale of zero to five, with peak winds of 160 mph (257 km per hour).


The full extent and cost of the damage was not immediately clear.


One bit of good news came from the state’s Office of Administration which announced Thursday afternoon that the Missouri State Capitol building was not damaged.


Despite the widespread destruction, there were no reports of deaths or additional injuries in Jefferson City.


The widespread damage was expected to displace some residents for weeks. The University of Missouri offered housing on its campus.


“As we talk with local and state officials to understand the full scope of the disaster and recovery efforts, we will deploy additional help,” Gary Ward, the university’s operations chief, said in a statement.


More than two dozen tornadoes were reported in Missouri and neighbouring Oklahoma. Thousands were left without electricity.


Ameren Missouri, an energy provider, said more than 400 crews were working to restore power in Jefferson City, but that outages could last through the weekend.


The weather service predicted strong and severe storms would continue through the weekend in Missouri and adjacent Illinois, causing “continued river flooding throughout the Missouri and Mississippi River basins.”


Floodwaters rose in Oklahoma, damaging or destroying homes along swollen waterways. There were concerns that some dams could give way and residents were urged to be ready to evacuate.


Several homes were reported destroyed in the small town of Crescent along the Cimarron River, while people living close to a dam on Keystone Lake in the city of Tulsa were encouraged to evacuate or be prepared to do so because the dam could breach.


Local media reported loose barges hit a dam on the Arkansas River in Muskogee, Oklahoma. There were no immediate reports of dam failure