Focus on innovation to build smart cities in Oman 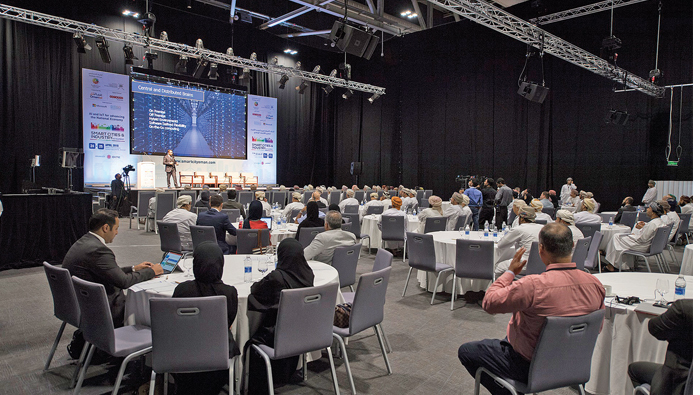 Muscat: As part of COMEX 2018, the Smart Cities Summit commenced under the patronage of Dr. Yahya bin Nasser Al Khusaibi, Undersecretary of the Ministry of Legal Affairs, in the presence of Dr. Salim bin Sultan Al Ruzaiqi, CEO of the Information Technology Authority (ITA), at the Oman Convention and Exhibition Centre. More than 100 speakers and experts from different public and private entities are attending the summit.
The summit aims to highlight technologies for enabling smart cities. It will focus on analysis of feasible technologies, case studies, upcoming innovations, and regional and international perspectives on how the concept of smart cities can be integrated into current structures and future planned cities.
The various components of smart cities such as technology, mobility, healthcare, infrastructure, governance and people will be examined in terms of their readiness and adaptability for Oman. The two-day summit titled “Artificial Intelligence and the Internet of Things for advancing the National Economy” as part of COMEX also began with a series of special panel discussions around key topics. In his keynote address, Dr. Bader Salim Al Manthari, In-Charge Deputy CEO for infrastructure & e-Services, ITA, said Oman was ready to invest in smart cities where the Oman Broadband Network provided high-speed internet.
On its part, Oman Government High Speed also took the initiative to link 18 government websites and was currently working on including 46 other websites to facilitate data exchange and services integration. In addition, massive efforts were being invested in the e-Government transformation plan; more than 700 e-Services had been launched so far.
Al Manthari said, “We have recently witnessed the cooperation of a number of government entities to launch the first Smart City in Oman based on innovative technologies and applications to deliver high quality services and improve citizens’ living standards. In this regard, the ITA signed an agreement for the implementation of a pilot project for transforming knowledge oasis/Muscat into a smart city in cooperation with a distinguished group of Omani innovators. Based on this, the ITA will set a policy for smart city projects and initiatives in the Sultanate.”
Fadi Nasser, General Manager ICT, Senior Advisor CEO, Omantel, gave a presentation on the importance of smart cities for a diverse economy and how data can be converted into knowledge. A panel discussion highlighting smart city initiatives in Oman followed. The first-day saw discussions on trends and challenges in developing smart cities with case studies and how smart applications can optimise the processes in some sectors such as oil and gas, and logistics.
The second day focused on artificial intelligence, the Internet of Things, cognitive cities and security, in addition to Mwasalat that will present its smart technology initiative, which will enhance services in public transportation in the Sultanate. All activities of the e.Oman pavilion will be concluded tomorrow.