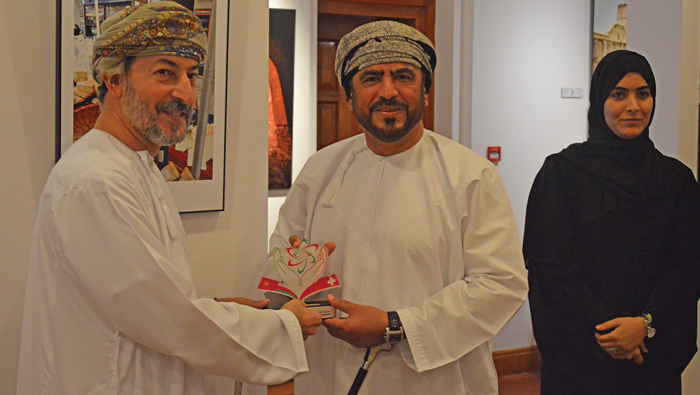 Muscat: The Oman-Switzerland Friendship Association celebrated its first anniversary with the launch of a book of photographs at Bait Al Zubair’s Zaffran Cafe.
The event was held under the patronage of Sheikh Khalid bin Salim Al Saidi, Secretary General of the State Council, in the presence of Stefano Lazzarotto, Ambassador of Switzerland to Oman.
Titled “The First Year of the Oman-Switzerland Friendship Association”, the book’s photos were organised by Captain Abdulrauf Wood with text provided by Wolfgang Amadeus Brülhart, Head of the Middle East and North Africa Divisions at the Swiss Foreign Ministry in Bern. Chronicling a year in the lives of both men, the work showcases photography spanning the village of Morges Western Canton of Vaud and Haramil in Muscat.
Wood said, “I was persuaded to agree to the publication of this book by Wolfgang because for quite a long time I had been sending him - in the morning and in the evening - photographs taken from my small house in Haramil, a small village five minutes from here just beside the sea. A village to which there was no road until 30 years ago.”
“It has remained a fishing village to this very day. And it’s quite astonishing to look from my roof terrace and see people mending nets,” he added.
Wood’s practice of sending his friend photographs began following a chance meeting with a Swiss couple, whom he invited to Haramil.
“They really enjoyed themselves. They said, ‘yes indeed, this is something very special that we can enjoy right here in Muscat, the capital city.’ And so we became very good friends.”
Sadly, the wife, Margaret, was diagnosed with cancer back in Switzerland. “She told me she had enjoyed her time in Haramil so much and asked if I could regularly send her just a few pictures of Oman.”
Wood sent her photos of Oman until she passed away.
“Her family told me that she said to them that receiving the pictures in the morning was her reason to get out of bed; that in the darkest time of her sickness, these pictures of Oman were one of things that gave her the will to go on,” he said.
It is that spirit of friendship that underlines the strong ties that bind the Oman-Switzerland Friendship Association. A book signing was held after Wood’s speech, with copies of “Statesman and Sportsman”, a book about the Swiss politician and patron of the association, Adolf Ogi, also distributed to attendees.
Book-lovers can get a copy of the book of photographs by contacting the Embassy of Switzerland in Oman.