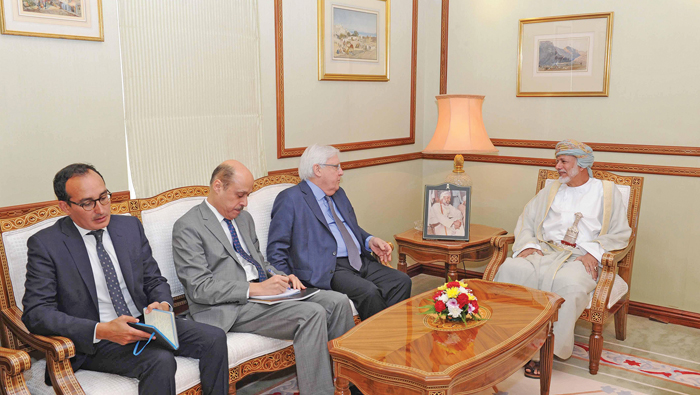 Muscat: The Special Envoy of the U.N. Secretary-General to Yemen, Martin Griffiths, said that Oman is playing a ‘pivotal role’ in helping the people of Yemen.
During his meeting with Yousuf bin Alawi bin Abdullah, Minister Responsible for Foreign Affairs, Griffiths hailed his meetings in Oman. Speaking at a press meet at the Ministry of Foreign Affairs, Griffiths said he was here for a series of meetings to discuss the humanitarian situation in Yemen.
He added: “During my visits and meetings in the neighbouring countries of Yemen, I have always heard them talking about ways to stabilise the situation, and I am privileged to be hearing the same in the meetings in Muscat.
“I was informed that Oman is a special neighbour of Yemen as it shares a history of dialogue and openness. I am delighted to confirm that it still holds the same notion which was clearly put forward during the meetings with dignitaries in these two days.
“I will be back in Oman again as it is playing a pivotal role in all our efforts to help people in Yemen. I will be briefing the U.N. Security Council in 10 to 12 days’ time and I am quite certain that the collective vision, what I have been hearing during my visits, is the vision of peace. Peace sooner, rather than later.”
United Nations Secretary‑General António Guterres announced the appointment of Griffiths as his Special Envoy for Yemen in February.
Griffiths brings in extensive experience in conflict resolution, negotiation, mediation and humanitarian affairs. Since 2014, he has served as the first Executive Director of the European Institute of Peace.
Between 2012 and 2014, he has served as an adviser to three Special Envoys of the Secretary‑General for Syria, and Deputy Head of the United Nations Supervision Mission in the Syrian Arab Republic (UNSMIS).
From 1999 to 2010, Griffiths was the founding Director of the Centre for Humanitarian Dialogue in Geneva, where he specialised in developing political dialogue between governments and insurgents in countries across Asia, Africa and Europe.
He also worked in the British diplomatic service and for various international humanitarian organisations, including the United Nations Children’s Fund (UNICEF), Save the Children and Action Aid. In 1994, he served in Geneva as the Director of the Department of Humanitarian Affairs, which preceded the establishment of the Office for the Coordination of Humanitarian Affairs. From 1998 to 1999, he served as Deputy to the United Nations Emergency Relief Coordinator in New York. He has also served as United Nations Regional Humanitarian Coordinator for the Great Lakes and in the Balkans.
Griffiths holds a master’s degree in Southeast Asian studies from the School of Oriental and African Studies at the University of London, and he is a qualified barrister. Born in 1951, he is married and has two children.